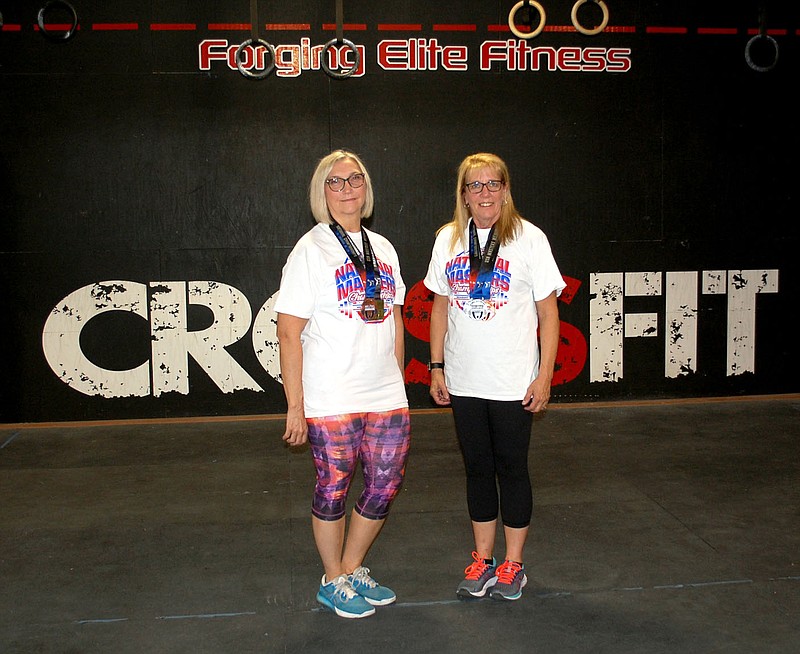 Lynn Paskiewicz and Eleanor Mallow have persisted through the covid-19 pandemic to win medals in Olympic-style weightlifting at the 2020 National Masters Championships.

The two Siloam Springs women have brought home medals from previous national and world events, but this year they pushed through the challenges of rescheduled events and the closure of local gyms. The national competition, originally scheduled to take place in Orlando, Fla., in March, was postponed several times. It eventually became an online competition that took place on Sept. 3 through 6.

Masters championship meets are for athletes age 35 and older and weights are varied by age and weight class. Olympic-style weightlifting is divided into two events, the clean and jerk and more technically difficult snatch, and competitors are scored by the total amount of weight they can lift during both events while maintaining proper form.

Paskiewicz, a retired Southside Elementary School librarian who competes in the category for women over age 60 in her weight class, tied for first place in the snatch and lifted a personal record of 42 kg (92.59 pounds). She was awarded a silver medal because she was the second person to lift 42 kg and competition rules state that if there is a tie, the winning medal goes to the first person to lift the weight, she said. She also won a silver medal in the clean and jerk and lifted a personal record of 45 kg (99.21 pounds). Her total was 196.21 kg, winning her a bronze medal.

Both women have been competing in Olympic weightlifting since 2017 and they first competed in the national and world championships in 2018.

Paskiewicz qualified for the 2020 national championship through her scores in the 2019 world championships, where she also won a bronze medal.

Mallow had to take a year off in 2019 because of an injury. She qualified in the early part of this year with the goal of competing at nationals in March, but the event was postponed and rescheduled until May, then June and finally August, Paskieicz said. The world championship was canceled altogether.

"It was the longest training cycle ever, it was harder mentally than physically," Mallow said.

The two women also had to train alone without the benefit of their coaches at Crossfit Siloam Springs because gyms across the state were closed due to the pandemic.

For the national competition, their coaches videoed them weighing in and lifting the weights, they said. Participants submitted their first tries, although it was on the honor system, they said.

Last week, Mallow and Paskiewicz submitted videos for the online Pan American Masters Championships, which lasts through Oct. 18. The results of the competition will be announced in November.

Olympic-style weightlifting is a sport with a history that stretches back to ancient Egyptian and Greek societies. Today, weightlifters compete in two events, the “snatch” and the “clean and jerk.”

Weightlifters pull the weight to their chest, then push it above their heads.