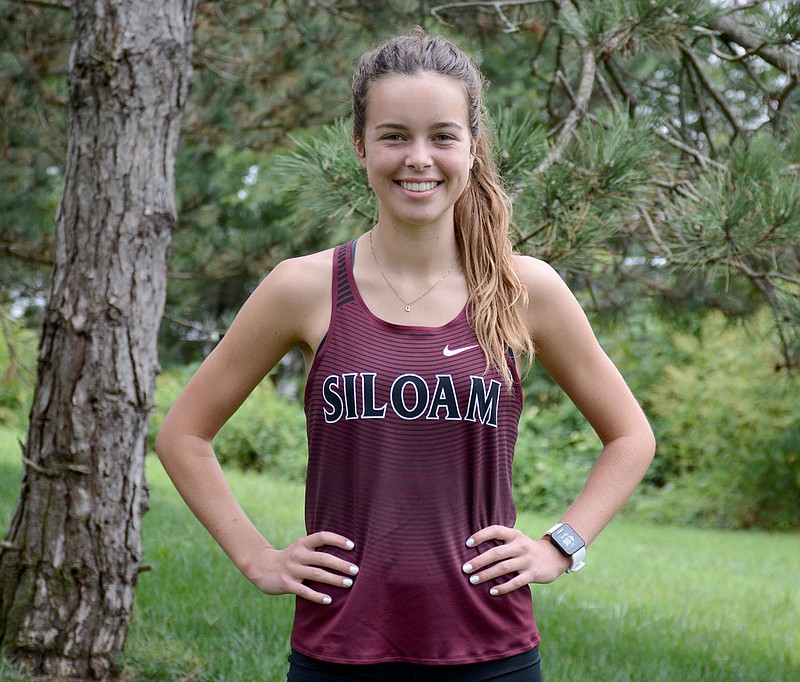 Quincy Efurd is glad she gave cross country a shot.

Through junior high, Efurd didn't participate in the sport despite the pleas all around her, including from head varsity coach Sharon Jones and her dad Conlan Efurd, who is a junior high cross country assistant.

"I just didn't really want to do it," Efurd said. "I don't really have a reason why. I just didn't want to run. I didn't think I'd be any good at it. It's not what I wanted to do."

Turns out the opposite was true, and Efurd's extreme competitive nature fit in nicely with the ultra successful Lady Panthers program.

It took a lot of convincing, but Jones said she's glad they convinced Efurd to come out.

"She's just a kid that does a lot of different things," Jones said of Efurd. "Growing up she was really into gymnastics. She's always done basketball. She's always been in track. In track she was a hurdler, and I always think she was more sprinter-minded until I think she started seeing how successful that 4x8 (2-mile) team was doing, and she wanted to be a part of that in track. She caught a little of the distance bug then. Then she just transitioned right in to cross country and automatically has been a difference maker."

Efurd joined the team as a sophomore and immediately made an impact, finishing 14th overall -- second on the team -- at the 2018 state meet with a time of 21 minutes, 43.5 seconds and helping Siloam Springs win its fifth straight state title.

The Lady Panthers saw their streak of state titles end in 2019 with a third place finish, but Efurd took 12th overall with a mark of 20:41.5.

This year she'll be counted on heavily for the Lady Panthers, who host their home Panther Cross Country Classic at the Simmons Course on Saturday morning.

Jones said Efurd is doing a good job as a pacer this year for the Lady Panthers, something she hasn't had to do in the past.

"She's stepped up this summer and really learned to pace," Jones said. "In practice she'll hit her mark and she's one that pushes. She's really good. She's everything you want in a leader for sure."

Efurd admits she's a very competitive person and cross country tends to bring that out in her. However, the covid-19 restrictions have changed up the way races are being held this year.

"I really like to win," she said. "That's why I'm really frustrated this year with covid. I can't race with every girl at once. We're (running) in waves and it made it really hard our first meet to see where I was and it made it all time (based). That's so weird to me. I'm racing myself and not other people, and I'm not sure I like that as much because, again, I'm very competitive with others. I like to base myself where I am really off of placement, which probably isn't the best, because I really need to work on my time as well, but the time usually follows whenever I chase people down."

Efurd ran a time of 22:24.09 at the Shiloh Christian Saints Invitational in Springdale on Sept. 5 to open the season. She finished 17th overall but was competing against athletes from Class 6A schools.

Last week at the Elkins Invitational, in the 4A-5A division, Efurd improved her mark to a time of 21:05.62 and finished first overall.

"This year I started off the strongest I ever have," Efurd said. "So I'm looking at that as a positive."

Efurd will join the Lady Panthers basketball team after cross country and plans on running track again in the spring.

But before she does that, she's hoping she can help Siloam Springs back into the winner's podium at Oaklawn Park this fall.

"I'm really hoping we get to pull it out and win again," she said. "That would be awesome."