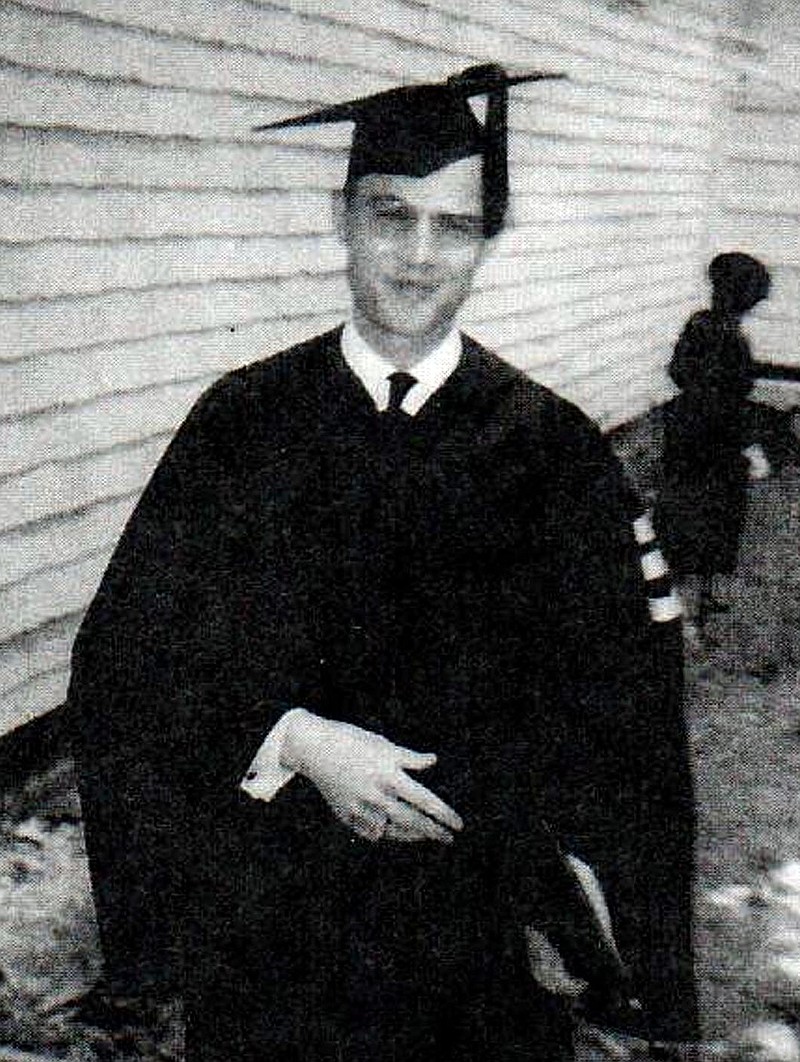 Photo submitted John Terry wears his cap and gown after graduating from John Brown University in 1949.

He was a victim of the covid-19 pandemic, according to his obituary.

Terry served as a Southern Baptist minister in Northwest Arkansas, Northeast Oklahoma and Texas; a professor of economics and director of development for John Brown University; a U.S. Army veteran of World War II; mayor of Siloam Springs; a columnist for the "Herald-Leader" and "The Northwest Arkansas Times;" and the author of several business books, his obituary states.

"He was as fine a gentleman as I have ever known in my life and I considered him a friend and a confidant," said Danny Wasson. "I know his family is going to miss him."

Terry's early life began in Vandalia, Ill., where he was born to William and Clester Terry on Oct. 8, 1920, his obituary states. He married Fern Stradley in 1942, it states.

Terry earned a bachelor of arts degree in Bible from John Brown University in 1949 and went on to pastor churches in Mason Valley, Decatur, Ozark and Jay, Okla., and was interim pastor at churches all over Northwest Arkansas and Northeast Oklahoma, Wasson said.

Lynval Abercrombie of Decatur remembers when Terry became full-time pastor of Decatur Baptist Church in 1948, shortly before he graduated from JBU in 1949. During the three to four years Terry spent in Decatur, he concentrated on getting younger people involved in church and organized into groups, Abercrombie said. He held tent revivals in the old city park and was very involved in the community. He also served as the chaplain for Peterson Industries, Abercrombie said.

While Terry was serving Decatur, the church built its first educational building in 1952, which added classrooms and resulted in the church having its first indoor restrooms and first baptistery, according to the church history.

Terry would go on to earn a Master of Business Administration Degree from the University of Arkansas in 1965 and received a Doctor of Humane letters degree from Linda Vista Baptist College in San Diego, Calif., according to a January 1985 article in JBU's student newspaper.

Terry began teaching at JBU in 1962 as a professor of business and economics, the article states. University records show Terry served as director of development from 1972 until 1976 and as a part-time instructor of economics again in 1985, according to Julie Gumm, JBU director of marketing and communications.

John Brown III, former university president, said that Terry served as his professor of economics when he was attending the university and was the director of development when he began working at JBU in 1974.

"He was a mentor and a friend to many of us who took classes on campus," Brown said. "My dad had called him to serve in administration and he served the university well in that capacity."

Terry was also a former member of the Siloam Springs Rotary Club, served for 16 years on the Arkansas Council of Economic Education, and was a member and former chairman of the Arkansas Southern Baptist Association, Wasson said.

Terry authored two books -- "Dictionary of Business and Finance" and "International Management Handbook" -- published by the University of Arkansas Press, his obituary states. He also wrote an economics column for "The Northwest Arkansas Times" and the "Siloam Springs Herald-Leader."

Abercrombie and Terry became lifelong friends and he continued to visit the former pastor in the nursing home until visitors were no longer allowed because of the covid-19 pandemic. Abercrombie remembers Terry as a strong leader, a good counselor and a very likeable person, he said.

Wasson remembers Terry as an "incredible person." During the past 10 years, Terry continued to officiate funerals even though he was no longer able to drive. Wasson, owner and operations manager of Wasson Funeral Home, said he would often pick Terry up on the way to funerals and they spent many hours in the car together.

"We had great life conversations, I learned a lot from him," he said.