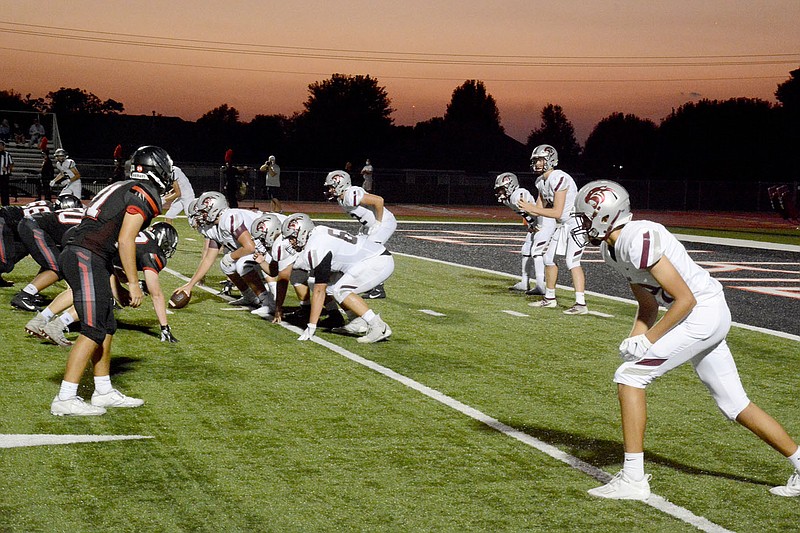 Graham Thomas/Siloam Sunday The sun sets at Blackhawk Stadium in Pea Ridge as the Siloam Springs offense prepares to snap the ball deep in its own territory. The Panthers' offense is averaging nearly 535 offensive yards per game through its first three games.

Siloam Springs coach Brandon Craig doesn't have much to complain about with the Panthers' offense so far in 2020.

Through three games, the Panthers (2-1) are averaging around 535 yards per game.

The Panthers' goal for each game is 200 yards rushing, 150 yards passing and 12 first downs.

Instead, the Panthers are averaging more than 21 first downs, 327 rushing yards and 207 passing yards per game.

"Right now I can't complain about our offensive production the first few weeks," Craig said. "All I can complain about is turnovers, and that's something we have to improve."

Siloam Springs had three turnovers, including a pick six, in a 52-42 loss against Rogers in Week Zero, and one lost fumble against Pea Ridge in Week 1 in a 55-21 victory.

In their 34-14 win against Harrison on Sept. 11, Siloam Springs did not turn the ball over.

"I think we're going to continue to stress that and make sure we're doing a great job of not turning the ball over," Craig said.

Siloam Springs was off this past week and the Panthers were able to begin working on opening 6A-West Conference play against Van Buren.

Siloam Springs and Van Buren have played each of the last eight seasons with each team winning four of the games.

"They're very talented," Craig said. "They've got some very talented kids. Gary Phillips, the quarterback, he's the kind of kid when things go bad he can still make something good out of it.

"(Jaiden) Henry is a versatile player he does a number of things for them. He played quarterback last week against Choctaw. He plays slot receiver. He's played corner. He's a versatile player that causes a lot of problems. They're pretty physical inside. They've got some good linebackers. We know it's going to be a tough game. We know it's going to be hard fought. It's a tough game. Our whole schedule is tough. We've just got to bow our neck and get better."