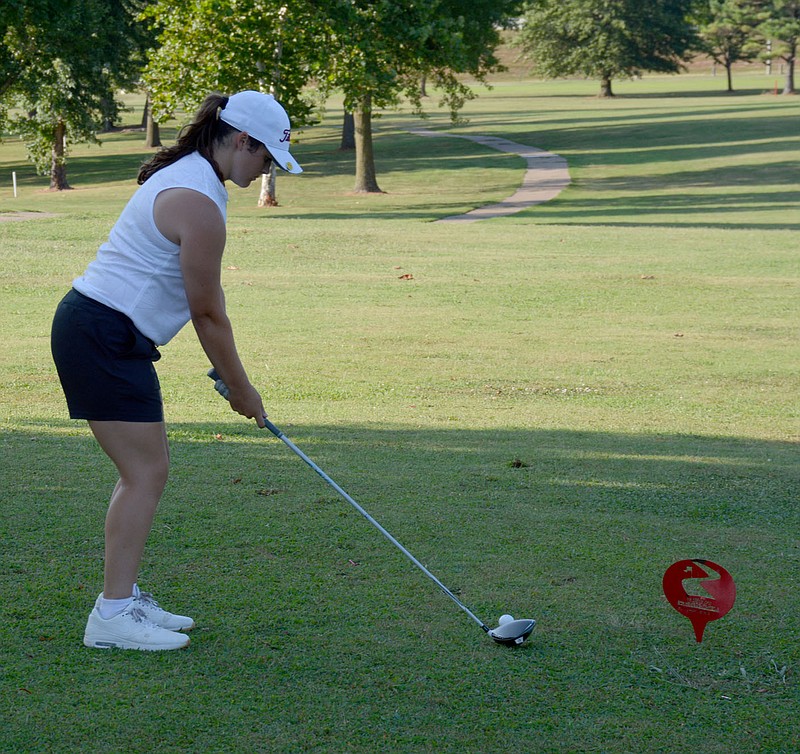 Graham Thomas/Siloam Sunday Siloam Springs senior Julia Jackson prepares to tee off in a match earlier this season. Jackson and the Lady Panthers golf team will participate in the Class 5A state girls golf tournament on Monday at Big Creek Golf and Athletic Club in Mountain Home.

After a year away, the Siloam Springs girls golf team is headed back to the state golf tournament.

The Lady Panthers finished third Tuesday at the 5A-West Conference Tournament at Cypress Creek Golf Course in Cabot. By finishing third, Siloam Springs qualified for the Class 5A State Girls Tournament, which is Monday at Big Creek Golf & Athletic Club in Mountain Home.

The top three teams in the conference tournament advance to the state tournament along with the top individuals not on state teams.

Mountain Home won the 5A-West title with a team score of 261, while Greenwood finished second at 269 and Siloam Springs third at 291. Greenbrier 327, Van Buren 338 and Russellville 341 were the other team scores, while Alma and Vilonia did not field a team score.

Greenwood's Hallie Jones was the medalist with a 76.

Emily Self led Siloam Springs with a 87, while Brooke Smith shot 102, Julia Jackson 103 and Baylee Morris 106. Those four girls will represent the Lady Panthers at the state meet on Monday.

The golfers overcame rainy weather, which made playing conditions tough, according to golf coach Michael Robertson.

With her score of 87, Self was named to the All-Conference team.

"It was a tough, tough day for everybody," he said. "A lot of really good golfers struggled. Emily is just now starting to get where we expected her to be all along. I thought all preseason she would be consistently in the low to mid 80s. She had a rough start Tuesday, playing in that first group, but she was really steady the rest of the way.

"Brooke Smith and Julia Jackson came in at No. 2-3 spot for us. Baylee Morris, I thought it was the best Baylee played. The last two weeks she was starting to get it going again. All three gave us scores that kept us competitive, we didn't have a blowup. If you can get a good score at top and two solid scores you've got a chance to be competitive on girls side."

The Lady Panthers have steadily improved throughout the season, according to Robertson, and that was evident on Tuesday in the conference tournament.

"There's no doubt that we've settled into a lineup," Robertson said. "We've had a lot of competition for that fourth spot, probably most we've ever had in girls."

The Lady Panthers will play at Big Creek for the second time this season. They also played at the course in the first match of the season on Aug. 3, fielding a team score of 346, 55 strokes higher than their team score on Tuesday.

"We're playing a lot better today than we were then," Robertson said. "We'll be more comfortable. We've come a long way, I would expect us to go play and be a lot more comfortable and walk away knowing you've gave it your best shot."

"The girls have gotten more consistent. They're hitting really well and have improved chipping and putting. They're pretty even keel and mentally really tough. I've told them several times, this is one of the hardest working girls teams we've ever had."

The Lady Panthers will play a practice round Sunday morning before the tournament starts at 9 a.m. Monday.

Robertson said Mountain Home's girls on their home course will be tough with Greenwood right behind them, but he expects the Lady Panthers to compete.

"I truly believe if we go and play and put up really good scores we'll have a chance to be right up there with all of them regardless of whose home course we're playing," he said.

The Siloam Springs boys also qualified for the state tournament with a second place finish in the conference tournament on Tuesday.

Greenwood's Brady Fein was the individual medalist with a 76.

It was a good day for the Panthers, who are returning to the state tournament after failing to qualify for last year's tournament.

"It was the most complete round our boys have played in two years," Robertson said. "The most telling stat on the boys side is we have five really good scores. We didn't have a single boy make all-conference, but (as a team) we were right up there with the conference champs. I'm really proud of them. I didn't see our guys quit. They took every single putt and chip seriously. You could see they really wanted it and were excited.

"I'm excited for those guys. They're great kids and they've really worked hard over the last few months to get there."

The Class 5A Boys State Tournament will be Oct. 5 at Big Creek in Mountain Home.