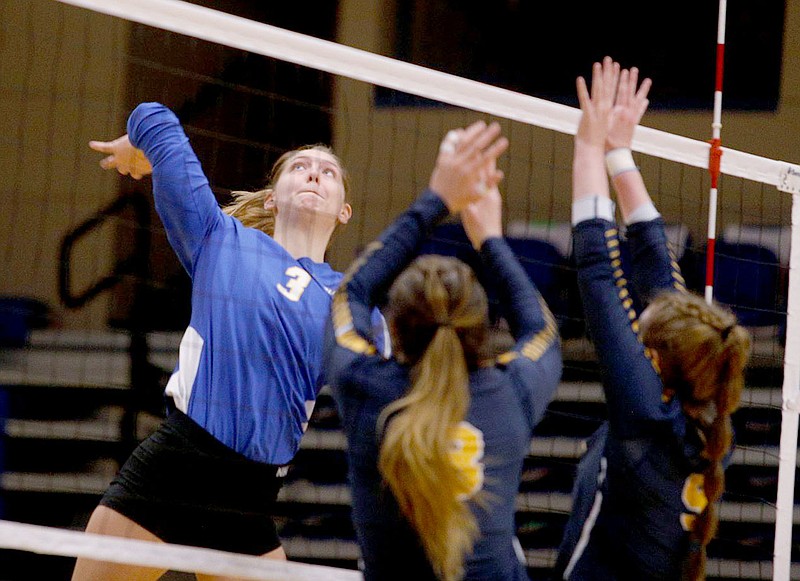 For the second time this season, sophomore Ellie Lampton eclipsed the 20-kill mark, and the John Brown University volleyball team withstood a Texas Wesleyan team on a 10-match winning streak and produced a four-set victory (25-23, 23-25, 25-20, 25-22) on Saturday (April 3) afternoon at Bill George Arena.

The Rams (16-3, 8-2 Sooner Athletic) hit below .100 in the third and fourth sets, and John Brown (11-3, 7-3) overcame nine ties and six lead changes in the fourth set to clinch home-court advantage in the Sooner Athletic Conference, which began Tuesday night at home against Southwestern Assemblies of God. Results were not available at presstime.

Swatting eight kills in both the first and second sets, Lampton's outstanding afternoon also featured an ace and three block-assists as she hit .314 on 51 swings. Lampton's 20 kills led a quartet of attackers that posted double-digit kills on an afternoon that saw John Brown hit .226 (66-24-186), including freshman Savanna Riney's 13 terminations on 45 swings (.111). Freshman Micah Fouts hit .400, notching 12 kills while freshman Joanna Hayes picked a perfect opportunity to hand in a career afternoon, finishing 10 terminations on 25 attacks (.320).

After an emotional five-set loss to SAGU last night, John Brown responded to its 15-match home winning streak coming to a close with arguably its most impressive performance of the season. The Rams entered the contest hitting .261 on the season, and left Siloam Springs with a mere .182 (50-20-165) clip -- 80 points lower than its average.

"Exceedingly proud of how our team played this afternoon," head coach Ken Carver admitted. "Senior day matches are filled with lots of emotions and you add to that a team that gave a lot emotionally and physically the night before and there were a lot of potential variables that could've impacted how our team performed today. We had a good prematch meeting and saw how well they had processed last night and were ready to play today.

"There were times last night where we played more cautious and timid -- this afternoon we stayed consistently aggressive with our attitudes and style of play. Our serving led the way, once again, in helping to limit Texas Wesleyan's very potent and efficient offense."

"Ellie had a big-time performance leading the way, and Joanna played with a lot of confidence and took some smart, aggressive swings today that illustrated all of the hard work she's been putting in to be ready to come into the match when called upon," Carver added.

"Our team played with a lot of heart, passion and energy for a lot of reasons today, but ultimately it was for our seniors, Taylor and Jaden, and wanting to provide them with one more home match for their careers."

Sophomore Morgan Fincham also dished out 24 assists, and was one of three Golden Eagles that served up a pair of aces on the day -- joining Blackman and junior Carrie Ciesla.

Wesleyan's well-balanced offense was led by Nyia Anderson and Veronika Webb as the duo posted 12 kills apiece. Bailey Foy added 11 in the loss as Morgan Burns passed out 37 assists.