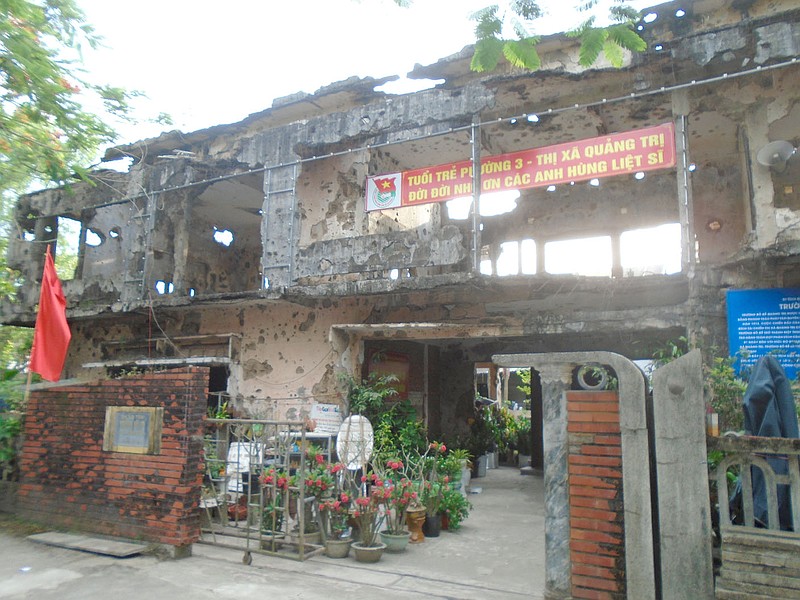 Preston Jones/Special to the Herald-Leader This school, located in Quang Tri, Vietnam, was destroyed during the Easter Offensive.

This time 49 years ago, Patrick Broyles was serving with military intelligence in South Vietnam. He experienced what's remembered as the Easter Offensive. Broyles is active with the Siloam Springs post of the Veterans of Foreign Wars, and when he mentioned to me that he had been in Vietnam in the spring of 1972, I said I hoped to talk with him especially since so few Americans -- about 25,000 -- were in Vietnam then. Three years before, the figure had stood at more than 500,000.

Like the better-known Tet Offensive of January 1968, North Vietnam's goal in 1972 was to deal a swift and decisive blow against the non-communist government of the south. While ground fighting was mainly the work of the South Vietnamese, U.S. troops and air power played key roles in extending South Vietnam's life.

I asked Broyles what he remembered about the offensive's start. "Panic," he said, meaning surprise and confusion. "Everything broke at once." The North Vietnamese "came through the DMZ"--the demilitarized zone separating North and South Vietnam -- "They came through Cambodia, they came in from Laos, all at the same time."

For a while, it looked as if the South might not hold. Broyles remembered thinking about heading to the coast and trying to get to a U.S. Navy ship in case the country fell. And he remembered going with Army forces to help lift a siege on the city of An Loc, northwest of Saigon.

The only time he cried was in An Loc. "We were going through the city, building by building, searching for the enemy, and we'd start either at the first floor or the basement and work our way up. And most of the businesses were houses, only two or three stories. And so we went to this one place and started at the basement, and we heard some noise."

Broyles called out in Vietnamese that whoever was there needed to come out or risk being killed. "So two little girls come out. One about 11, and her sister, about eight. And they came out. And they had been living on sewer water and rats and cockroaches." Early in the Easter Offensive, North Vietnamese soldiers had come to their apartment building and killed their parents. The U.S. soldiers took the girls to a center where they could be cared for, "and after that I don't know what happened to them."

I mentioned that if the girls are still alive, then now they're women in their fifties. A surprised look came on his face. "I never thought about that," he said. "I always thought of them as little girls."

These are just a few things Patrick Boyles told me. He also served in Iraq as a civilian agricultural advisor.

Every day, people in Northwest Arkansas and around the country see and interact with combat veterans but don't know it. They have no idea what their neighbors and fellow shoppers and church members saw in the world of war. If more of us did know, we would have a better sense of what does and doesn't matter.

Patrick's memories were recorded and are available to anyone who wants to listen. Like a lot of combat veterans, Patrick expressed some regret that his recorded memories bring attention to him that should be on others, especially those who didn't survive. But he also said that if the videos hadn't been made, family members of his never would have known his story.

This reminds me of an email I received a couple weeks ago, after an interview with a Korean War veteran had been posted. "Edmond's sisters were so moved by his interview," the writer said. "The youngest had no idea about his service."

Then there's the other reality, expressed in a different email that came recently from a woman who wishes she had had "the presence of mind to record him telling the stories." She meant her dad, also a Korean War veteran who is no longer able to speak.

We have just passed a holiday that commemorates the triumph of life over death, of resurrection. I have always thought of historical story-collecting as a kind of resurrection. Memories are buried and essentially lost. But interest and questions and listening can bring them to life again and make them useful to others. They can give us a broader and deeper perspective.

-- Preston Jones lives in Siloam Springs and oversees the website "War & Life: Discussions with Veterans." Opinions expressed are those of the author.