n Rural buses to take employees from Stilwell to West Siloam Springs by From Staff Reports | April 21, 2021 at 5:21 a.m. 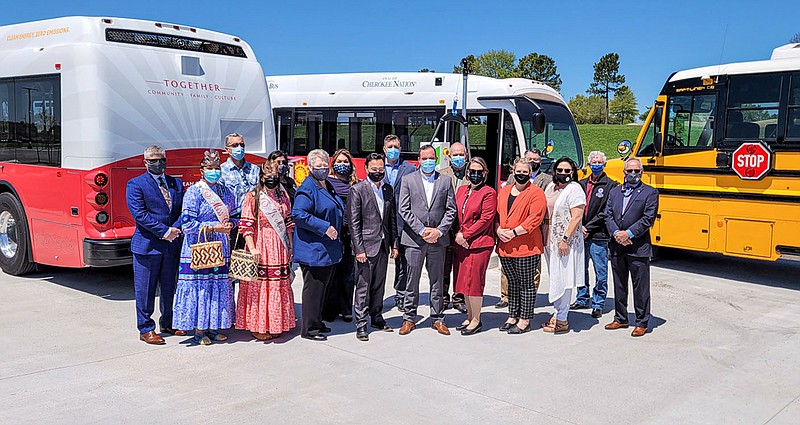 Photo submitted The Cherokee Nation on Monday unveiled its first public, rural eco-friendly electric buses to transport employees and tribal citizens to work and tribal health centers, and its first electric school bus, which is the first of its kind in the state of Oklahoma.

TAHLEQUAH, Okla. -- The Cherokee Nation on Monday unveiled its first public, rural eco-friendly electric buses to transport employees and tribal citizens to work and tribal health centers, and its first electric school bus, which is the first of its kind in the state of Oklahoma.

The two electric transit buses and new charging stations built to accommodate the vehicles were purchased through a $1.5 million U.S. Department of Transportation grant awarded to the tribe in 2018, along with other funding sources, as part of Cherokee Nation's ongoing effort to reduce its carbon footprint.

The rural transit buses will take employees from Tahlequah to the Catoosa area and Stilwell to West Siloam Springs. The electric school bus is for student transportation at Sequoyah High School.

Cherokee Nation's transit services produce more than 500,000 vehicle miles for an average of 110,000 riders each year within the tribe's 14-county reservation in Northeast Oklahoma. Routes increase the mobility of Cherokee Nation citizens and for many, represent a lifeline to vital services.

The $375,000 electric school bus is for student transportation at Sequoyah High School.

"The Cherokee Nation has always been a leader in environmental conservation and forward-thinking efforts that will reduce harmful activities impacting our natural resources," said Principal Chief Chuck Hoskin Jr. "As we work to reduce our carbon emmissions by 25 percent by 2027, we are wisely investing in sustainable projects that will have many long-term benefits. Our responsibility as stewards of the land, air and water will always be one of our most signficant values, and introducing these eco-friendly transit vehicles into our fleet is an example of how we can make a great difference in our environment."

The tribe's new electric buses will produce zero tailpipe emissions and are expected to reduce harmful carbon emissions within the tribe's jurisdiction by more than 5 million pounds over the lifespan of the vehicles. The two new electric transit buses will be used to replace existing diesel-powered buses serving routes between Tahlequah and the Catoosa area, and West Siloam Springs and Stilwell.

"Taking care of our land, our water and our air has always been important to Cherokees. We understand the sacred responsibility that comes with being good stewards of everything the Creator has given us," said Deputy Chief Bryan Warner. "Replacing traditional transit buses with eco-friendly vehicles is a great way to reduce the carbon footprint we are leaving on the Earth."

The Cherokee Nation is the only tribe in the country and the only entity in Oklahoma to receive federal grant funding in 2018 to purchase the two electric transit buses that will be used to transport tribal citizens and employees.

"I'm proud that the Cherokee Nation is continuing to lead the way among local, state and federal governments as well as tribal nations as we find new and innovate ways to better care for our environment," said Cherokee Nation Secretary of Natural Resources Chad Harsha. "These new eco-friendly transit routes and our new electric school bus will soon be providing reliable transportation that helps our citizens and students."

Monday's announcement by the tribe is part of a week-long celebration of Earth Day. Activities include:

• Tuesday, April 20 – Tribal leaders met at 4 p.m. to celebrate after the Bee Conservancy awarded Cherokee Nation with a grant for two pollinator houses to be built at the tribe's heirloom garden in Tahlequah, in addition to the 16 bee pollinator homes previously placed in the garden as part of First Lady January Hoskin's initiative to boost the population of pollinators while improving the environment.

• Wednesday, April 21 – The Cherokee Nation will host an e-waste and battery recycling event from 7:30 a.m. to 2 p.m. behind the W.W. Keeler Tribal Complex in Tahlequah.

• Thursday, April 22 – On Earth Day, a solar panel roof installation will kick off at 1 p.m. at the Mid-County Community Building in the Peavine community of Adair County. Principal Chief Hoskin will also read an Earth Day proclamation celebrating the tribe's clean energy initiatives such as investing millions of dollars into sustainable communities by providing solar panel roofs at Cherokee community buildings to lower utility costs and provide renewable energy upgrades.