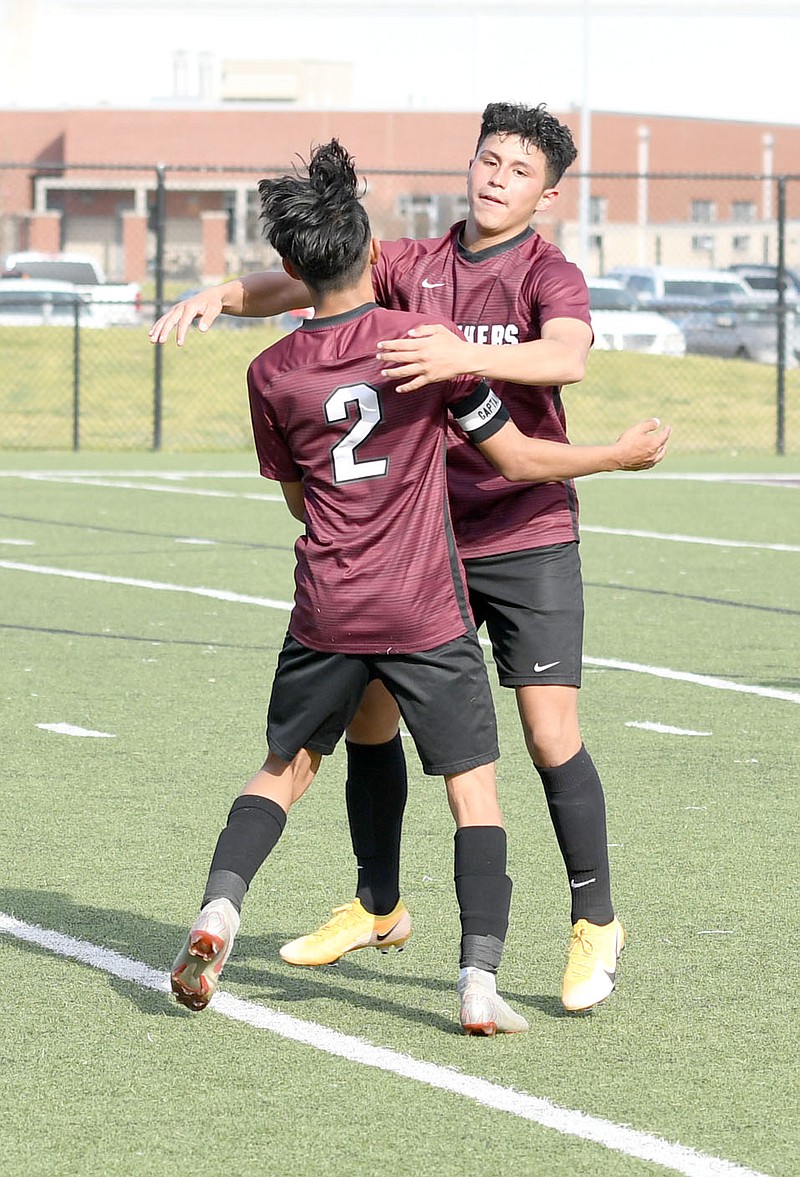 Bud Sullins/Special to the Herald-Leader Junior Garza, No. 2) and Ivan Sandoval embrace after Sandoval assisted on Franklin Cortez's goal in the second half of Siloam Springs' 2-0 win against Greenbrier on Monday at Panther Stadium.

Siloam Springs' boys soccer team stayed in the thick of the 5A-West Conference race Monday with a 2-0 win against Greenbrier at Panther Stadium.

Siloam Springs scored just 14 seconds into the match to take a 1-0 lead and then added an early goal in the second half to set the final margin.

"We had a few goals this year for the season that our leadership team came up with," said SSHS head coach Luke Shoemaker. "One was 10 clean sheets. We got that one tonight. Another was to protect our home turf, and we continued that trend. (Greenbrier is) a physical team. They're a tough team. I fully expect them to make the state tournament. Coach does a good job with them. In spurts we played well and there's other times there's things we need to do better. But you can't go broke taking a profit."

"We really needed to get this one because we needed to stay in the race for the conference championship," said SSHS senior forward Franklin Cortez, who had a goal and an assist in Monday's 2-0 win against Greenbrier.

Edwin Batres played a ball into Cortez who took a shot, that was deflected. Junior Garza got the rebound and headed in the score for a 1-0 lead just 14 seconds into the match.

"Junior has a knack for being in the right place," Shoemaker said. "He listens, he plays hard. He loves to put his head in the ball."

But the early goal might have had an adverse effect as well. Siloam Springs went flat for much of the first half and couldn't muster up many more scoring chances.

"We were talking about it on the sidelines," Shoemaker said. "A lot of times when you score so soon and so quick, it almost leads to an over-hyped mentality where we stop doing the simple things and we press almost too much. Part of it is we preach intensity and effort and heart, and so from 'go' we want to be the team that's the aggressor. Unfortunately there were spurts in this game where we lost a lot of that passion, and I think some of that was because of that (early) goal."

Cortez said Siloam Springs regrouped at halftime and it showed in the second half.

"(The early goal) set the tone, but we soon died off," Cortez said. "We were struggling a bit. Coach Shoe had a good talk in the locker room and it kind of helped motivate us to go out and set the tone even higher."

Cortez put Siloam Springs up 2-0 in the 44th minute with another header goal. The assist went to Ivan Sandoval.

"We wanted Franklin to get where he can beat them on the flanks," Shoemaker said. "He made a great run and he put his head on the ball, which is something you want out of a guy who loves to score goals."

Cortez leads the team with 17 goals and 15 assists heading into Tuesday night's game at Greenwood. Results were not available at presstime.

Siloam Springs is back in action on Friday at home against league-leading Russellville.

"It's great for the guys because as we approach state tournament time you want them to have the focus that every game matters and every game is a battle," Shoemaker said. "Friday night we have our biggest rival in Russellville."