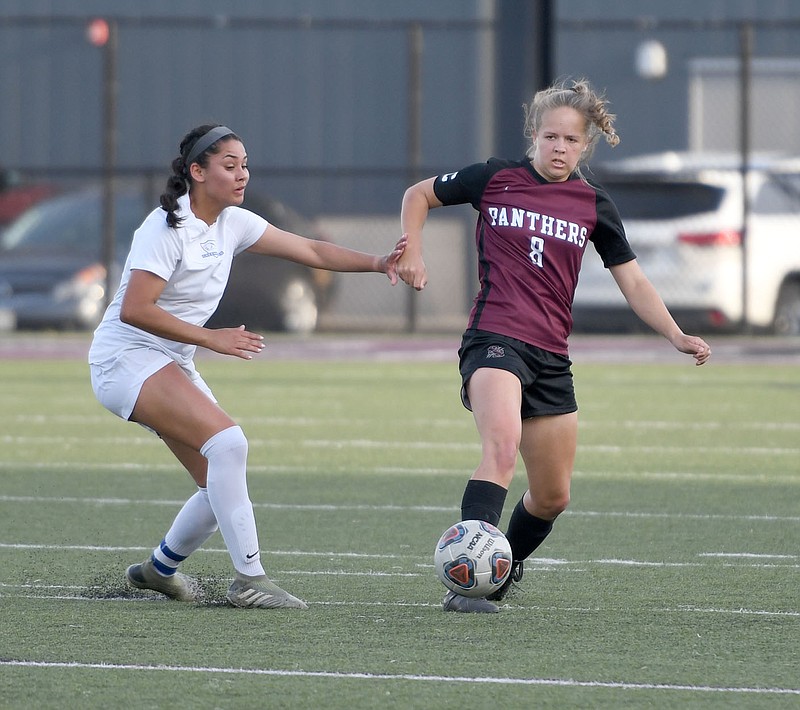 Greenbrier's girls soccer team is now in the driver's seat in the 5A-West Conference.

Greenbrier slipped behind Siloam Springs' defense twice for a pair of goals Monday and made it stand up for a 2-1 victory at Panther Stadium.

Greenbrier (11-1-1, 10-0-1) took sole possession of first place in the 5A-West with the win, while Siloam Springs (10-3-1, 8-1-1) fell into second place. Greenbrier coach Larry Green said his team knew the stakes were high for Monday's game, which was originally supposed to be played last Friday but was moved to Monday because of weather.

"My girls understood that completely going in, and it was important to them," Green said. "Because Siloam's a really good team. We knew we were going to have to come out and battle for 80 minutes."

The two teams played to a scoreless tie in the first meeting at Greenbrier on March 18.

Siloam Springs dominated the possession in that game, but that was not the case Monday night.

Greenbrier proved to be the aggressor for much of the match.

"Greenbrier was a different team than they were in March," said Siloam Springs coach Abby Ray. "They brought us their best game and I can't say we did the same."

Siloam Springs had an early scoring opportunity in the first half around the Greenbrier goal but couldn't push one across.

The field flipped from that point with Greenbrier firing away at Siloam Springs' three-player defensive front.

A shot from Greenbrier's Melissa Rios went wide in the 18th minute.

Greenbrier took a 1-0 lead in the 25th minute on a goal from Madison Fechtelkotter, who got behind Siloam Springs' back line and one-on-one with SSHS keeper Regan Riley. Fechtelkotter beat Riley with a goal to the left side with 15:30 left and a 1-0 lead.

Siloam Springs began to come alive offensively at the end of the first half.

Karen Flores' shot hit the crossbar with under a minute left and she had another shot miss just before halftime.

Bethany Markovich had a free kick saved over the top by Greenbrier's goalkeeper and Jetta Broquard and Madi Race also had shots that were saved.

With 27:27 remaining in the game, Greenbrier scored its second goal when Rios got behind Siloam Springs' defense and scored for a 2-0 lead.

"It's like a typical season," Green said. "We work to build and build and try to improve every week, and I feel like the girls have invested in that. And every week it seems to show every game. We pick up something in practice that we implement in the game. I felt like we had our legs a little better in this game versus the last time we played, so that helped as well."

Siloam Springs had multiple chances after that, but it wasn't until 7:21 left in the game when SSHS got on the scoreboard.

A scrum in front of the Greenbrier net resulted in a goal for Sydney Moorman as Siloam Springs pulled within 2-1.

The goal seemed to re-energize Siloam Springs, but time ran out on any further comeback.

"We will learn from this," Ray said. "We've said all year that you learn from failure. 'Losing hurts worse than winning feels good.' This one hurt, but through that adversity we walk away stronger and more united than we were before."

Siloam Springs was scheduled to return to action on Tuesday at Greenwood. Results were not available at presstime.

Siloam Springs is back at home Friday night for a showdown with third place Russellville.