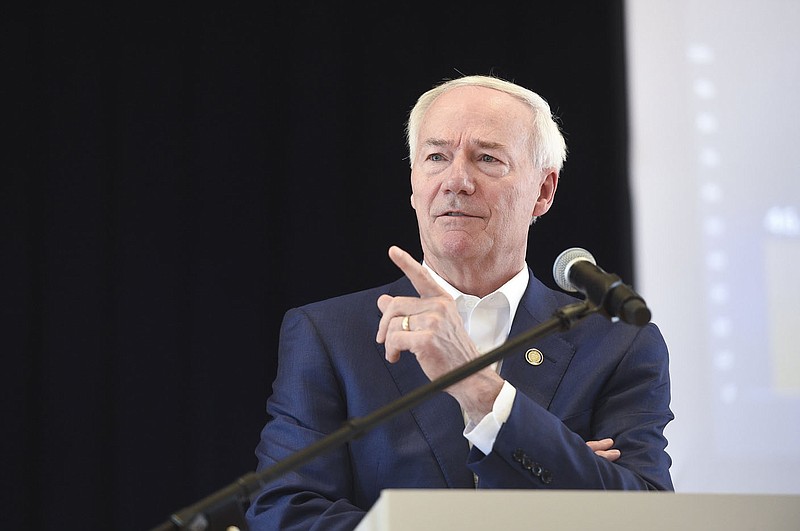 Charlie Kaijo/NWA Democrat-Gazette Gov. Hutchinson calls on a speaker in the audience to share their concerns and questions about the covid-19 vaccine, Friday, July 30, 2021 at the American Legion Community Hall in Siloam Springs. Gov. Hutchinson visited Siloam Springs for the final stop in his series of community conversation about the covid vaccine.

Gov. Asa Hutchinson met resistance when he brought his pro-vaccine message to Siloam Springs on Friday for the latest in his series of covid conversations.

The town-hall style event took place as Northwest Arkansas hit an all-time high of of 146 hospitalizations Friday, six more than the record at the height of the pandemic in January, according to Martine Pollard, a spokeswoman for Mercy Hospital who released a joint statement from the region's largest health-care providers.

More than 100 people attended the event at the Siloam Springs Community Building, with social distanced seating in the front and middle of the room, along with a large crowd gathered in the back. Nearly 30 people addressed the governor during the meeting, which lasted over an hour.

Audience members shouted "liar," jeered and held up signs as Hutchinson and Dr. Jose Romero, state secretary of health, fielded questions on topics such as vaccine safety and effectiveness, long-term side effects, concerns about businesses mandating vaccines for their employees, government transparency, alternative therapies such as hydroxychloroquine and ivermectin, and masks.

Other audience members encouraged vaccination and shared personal stories about how crowded hospitals are endangering their health or their family's health.

The event came a day after Hutchinson announced he is reinstating a public health emergency and calling a special session to lift a state law prohibiting mask requirements for public schools. The meeting was the 12th stop in Hutchinson's series of covid-19 conversations encouraging people to get vaccinated. Other meetings this week occurred in Mountain Home, Dumas and Heber Springs.

There has been a 40% increase in vaccination since Hutchinson started hosting covid conversations, he said. The meetings have helped get people engaged -- doing more research about the vaccines and talking to trusted health advisers like their doctors, he said.

"I think it's the essence of democracy whenever you have the government being asked tough questions and health advisers of the important issues of the day," Hutchinson said. "Whether they are opposed or not they had the opportunity to speak out today."

On Friday, there were 18,541 active cases, 2,544 new cases and 1,087 hospitalizations in the state, according to the Arkansas Department of Health. In Northwest Arkansas, Benton County had 225 new cases, Washington County had 189, Sebastian County had 125 and Crawford County had 24.

Hutchinson cited the delta variant's high transmission rate and the state's low vaccination rate as the reason for the surge.

"I believe there is urgency about this discussion because we have school starting in a couple of weeks," he said.

There is a limit to what the government can tell people to do, Hutchinson said.

"It's about people getting the right information and making the right decision and it is about communities taking action," he said.

Patsy Bedford of Gravette raised concerns at Friday's forum about hospital staff members being required by their employers to be vaccinated. She asked if employer mandates are a violation of civil rights.

Privately own businesses can make their own decisions about requiring vaccinations or masks, Hutchinson said.

"They are making decisions for their workforce and their patients and their health," he said.

People have freedom of choice over where they work, but businesses also have the freedom to make decisions to protect their patients' health, Hutchinson said.

Another man asked why so many people who have had the vaccine are getting the virus.

Hutchinson said if a vaccine has a 90% rate of effectiveness, that means one in 10 people who are vaccinated can still get sick. However, the vaccine prevents 98% of people from hospitalization and serious illness, he said.

Romero said the delta variant, which is currently circulating, can replicate in individuals who have been vaccinated, but the vaccine protects against the worst of the complications, including hospitalization and death.

"This is a vaccine that is still successful and that's why we recommend it for everyone that is eligible," Romero said.

Audience member Ashlay McFadin, who is from Siloam Springs but now lives in Fayetteville, said her brother almost died Monday because local hospitals were diverting patients and no beds were available. McFadin said her brother is still in the hospital fighting for his life, battling a preexisting medical condition rather than covid.

She appealed to community members to get vaccinated to protect their loved ones.

"This isn't political, this should not be political," she said. "It is life or death."

Sandi Bertaux of Lowell said she has been fighting cancer for four years and may have to delay a surgery to keep her cancer from spreading if hospitals continue to be full because of the low vaccination rate. There are people much sicker than her who need access to hospitals, she said.

"It's scary that I can lose part of my jaw, my face, my shoulder, while I'm waiting for you guys to get vaccines so that I can get rid of my cancer," she said.

Hospital shortages are very real, Hutchinson said, as other members of the crowd shouted, "Lies, we know the truth."

Adam Bracks, CEO of the Siloam Springs Regional Hospital and Physicians Speciality Hospital in Fayetteville, which are both part of the Northwest Health system, confirmed to the audience the local hospital is at maximum capacity caring for a significant number of covid-19 patients as well as other patients.

Covid-19 is challenging because long hospital stays are necessary, which slows down the operation of the hospital, Bracks said.

"We are at the point we struggle to accept new patients because we don't have the nurses to meet those needs," he said.

Hutchinson said about 14% of hospitalizations across the state are covid-related, but covid patients are hospitalized for long periods of time while other health needs are postponed.

Covid hospitalizations in Northwest Arkansas increased by 16 patients Friday, up from 130 on Thursday, Pollard said. The youngest covid patient on Thursday was under the age of 12, she said.

Thirty days earlier, the same hospitals reported a total of 99 ICU beds and 33 ventilators in use.

Fifteen patients were hospitalized with covid-19 at Mercy Hospital in Fort Smith on Friday, according to spokeswoman Mardi Taylor -- down seven patients from one week earlier.

Statewide, 398 of the 1,087 hospitalized patients were in ICU, and 219 patients were on ventilators, according to Danyelle McNeill, public information officer for the Arkansas Department of Health. A total of 1,842 hospital beds, 42 ICU beds and 621 ventilators were still available, she said.

The Benton County Coroner's Office reported four covid-19 related deaths this week for a total of 19 in July; the youngest person to die this week was a 24-year-old woman from Bentonville, according to the county website.

Jenkins said the jail is still isolating detainees when they come into the jail. She said they are isolating covid-positive detainees to help prevent the spread of the virus.

She said the jail is checking inmates' temperatures and inmates are wearing face coverings. The jail is also sanitized with a Clorox 360 fogging machine, Jenkins said.

The recent surge in covid-19 cases led Benton County officials to reinstall the acrylic partitions between the seats of justices of the peace and post signs recommending face coverings before the start of Thursday's Quorum Court meeting. Public seating at the meeting also was spaced out. The room was disinfected before and after the meeting, and air purifiers operated during the meeting.

Washington Regional announced Friday it will reopen its drive-through covid-19 testing clinic at 3318 N. Northhills Blvd. in Fayetteville on Monday. The clinic will serve people with active symptoms of covid-19 or those who have been exposed to someone with covid-19. The clinic will be open from 8 a.m. to 4 p.m. seven days a week. 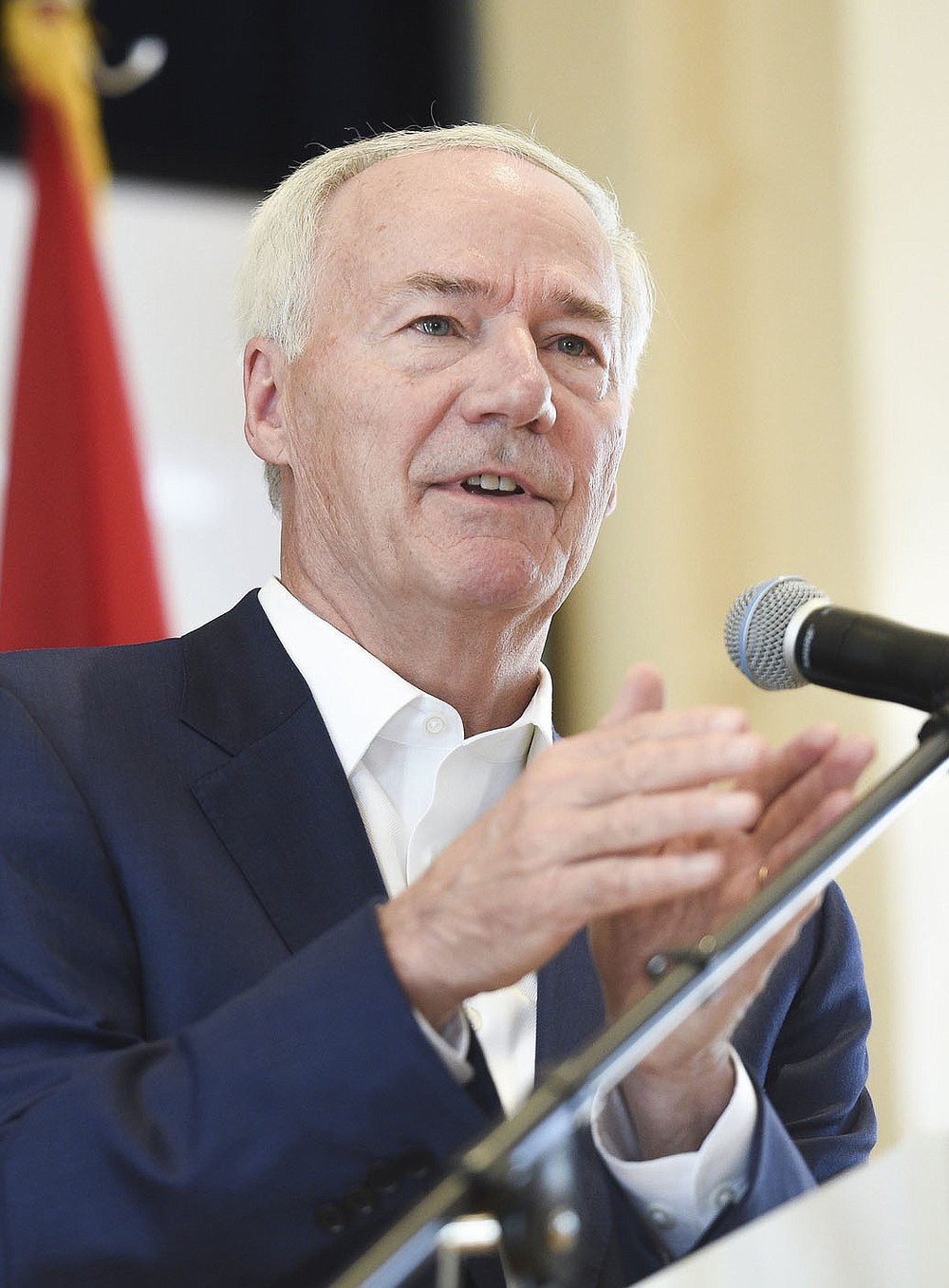 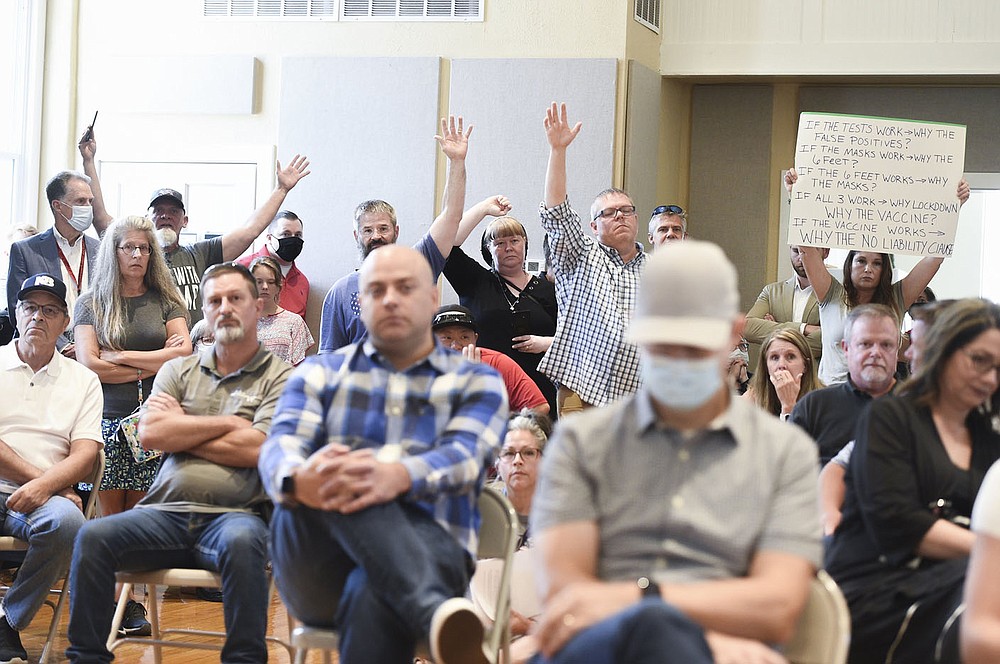 Charlie Kaijo/NWA Democrat-Gazette The crowd gathers Friday to hear Governor Asa Hutchinson at the American Legion Community Hall in Siloam Springs. Gov. Hutchinson visited Siloam Springs for the final stop in his series of community conversation about the covid vaccine.