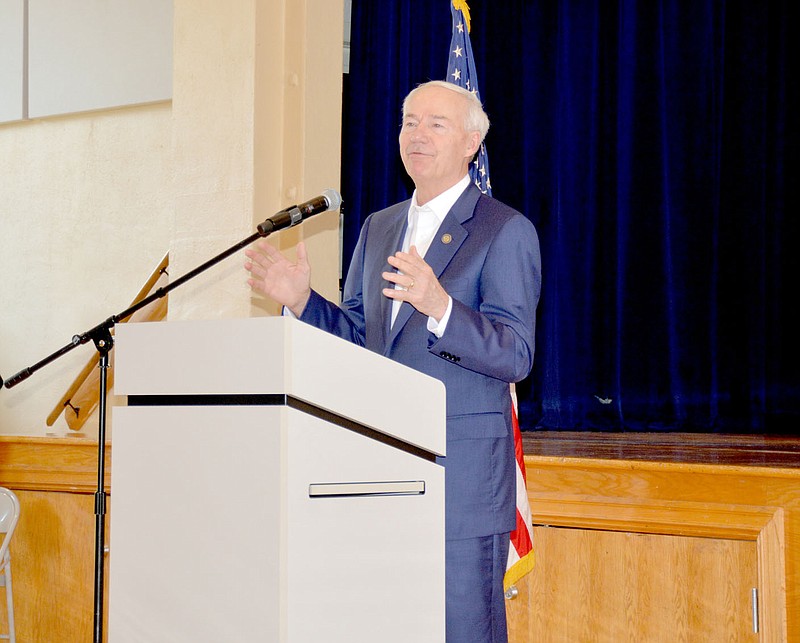 Marc Hayot/Herald-Leader Governor Asa Hutchinson speaks about the importance of getting vaccinated on Friday at the Siloam Springs community building. Hutchinson came to Siloam Springs as part of his "Covid Conversations" series to encourage Arkansans to get the vaccine but faced strong opposition from a portion of the audience.

Attendees of Gov. Asa Hutchinson's latest talk in his "Covid Conversations" series, which was held Friday in Siloam Springs, reacted both negatively and positively to the governor's message.

Several people, who crowded into the back of the Siloam Springs Community Building, heckled the governor and criticized his attempt to encourage people to get the coronavirus vaccines, while others in the crowd supported the governor and said people need to get vaccinated.

Ashley McFadin, who is originally from Siloam Springs but now lives in Fayetteville, spoke about how her brother needed medical aid but was diverted to a different hospital because of the large amount of coronavirus cases at the first hospital. McFadin said she felt embarrassed for the area.

"I stood up and spoke and whenever I sat down and put my mask on someone walked by and popped my face," McFadin said. "Whenever I shared my story people were laughing."

McFadin did not say which hospitals her brother originally went to and was diverted to, but did say if more people were vaccinated incidents like what her brother experienced would not happen.

Debra Varela, a certified registered nurse anesthetist from Fayetteville who works in multiple facilities, said the meeting was a pretty accurate snapshot of not just opinions but emotions that she sees at clinical practices.

"Clinically what we see, not just in statistics but actual real life, is that while we can see infections post vaccination," she said. "The severity is vastly different and so it is our unvaccinated population that we see in intensive care facilities."

Varela said admissions are absolutely up and capacity is becoming limited. She also said the medical establishment needs to focus on severity and mitigation through things that people can do to protect immuno-compromised and younger populations.

Dr. Ashish Mathur of Gentry said the meeting was great because it was a larger sample size for him to hear all the different opinions.

Mathur said a lot of people have concerns about the vaccine and other treatments like Hydroxychloroquine, which certain doctors believe can help cure the coronavirus, but many in the medical field don't have all the answers.

"That is difficult for us when we are trying to promote good health," Mathur said.

Other attendees held different opinions about the governor's promotion of the vaccines. Cindy Sigmon, who came from Rogers to attend the meeting, said people who were there in opposition to the vaccine have done their research.

Sigmon went on to say there is an agenda beyond the virus in the country.

"He's side-stepping the concerns and as a result the distrust between the people of the state of Arkansas and the government of our state is growing wider and wider," Sigmon said.

Sheila Phillips, who came from Prairie Grove to attend the meeting, said before the start of the governor's talk the attendees are here to have their voices heard and thinks it's time to put away fear and to stand on true science.

"We are listening to so many different voices right now, from the CDC (Center for Disease Control) and they'll say one thing and then they'll say another," Phillips said.

Along with the change in guidance from the CDC regarding mask wearing, Philips brought up the CDC's comments about how there is no differentiation in polymerase chain reaction (PCR) testing of Influenza and the coronavirus.

On July 27, the CDC updated its guidelines for fully vaccinated people recommending that everyone wear a mask in public settings in areas of substantial and high transmission regardless of vaccination status, according to a press release from the CDC.

The CDC also said on July 21 in a release to individuals performing coronavirus testing that it will withdraw the request to the Food and Drug Administration (FDA) for Emergency Use Authorization (EUA) of the real time PCR Diagnostic panel by December 31 of this year, the CDC states.

In the CDC's July 21 statement, they said the following about this change:

"In preparation for this change, CDC recommends clinical laboratories and testing sites that have been using the CDC 2019-nCoV RT-PCR assay select and begin their transition to another FDA-authorized COVID-19 test.

"CDC encourages laboratories to consider adoption of a multiplexed method that can facilitate detection and differentiation of SARS-CoV-2 and influenza viruses."

Phillips said she and her husband do their homework and want the governor to hear that a majority of constituents in Arkansas do not want to be muzzled.

Dana Graves said she comes from a different school of thought. Graves recently completed her casework for her doctorate in Naturopathic Medicine and doesn't subscribe to the same things traditional doctors do.

Graves' mother, Diana Wright, had Stage Four Cancer and if she had done things the traditional medical way she would have died, Graves said.

Siloam Springs community leaders also weighed in on the governor's visit. City Administrator Phillip Patterson said the city was pleased the governor came to Siloam Springs, and while good information was exchanged there were hopes of having better dialogue between those with opposing views.

Arthur Hulbert, the president and CEO of the Siloam Springs Chamber of Commerce said it was great the governor took his time to hear people's opinions and what seemed clear is that people do not want federal or state mandates for vaccinations. 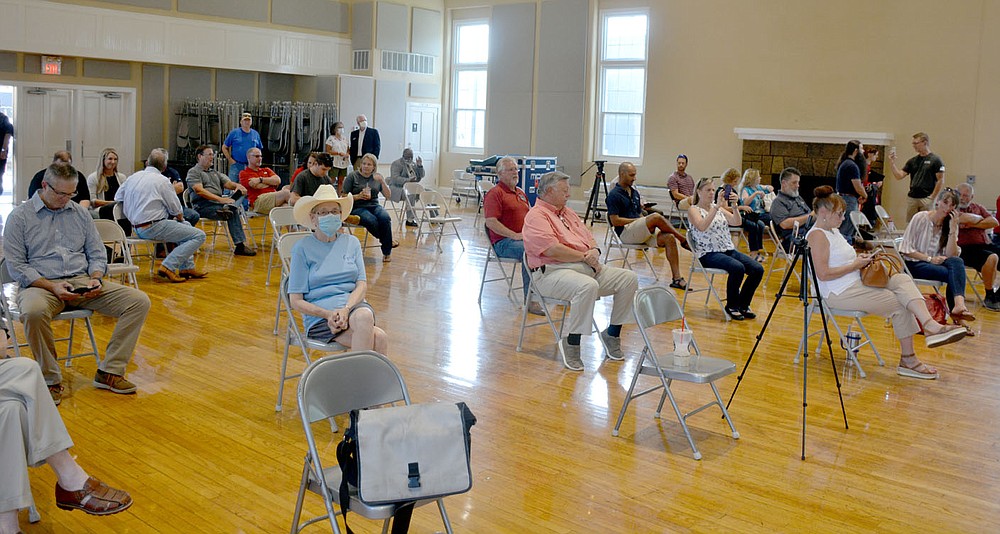 Marc Hayot/Herald-Leader Audience members wait for the governor to speak on Friday at the Siloam Springs community building. The governor came to speak in Siloam Springs as part of his "Covid Conversations" series, however faced opposition from a large number of the audience.