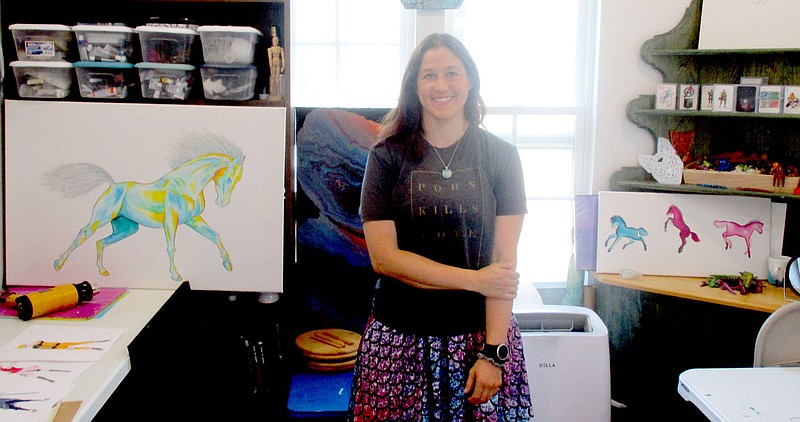 Marc Hayot/Herald-Leader Jessica Thompson proudly displays her work in the studio her father built her. Over the last nine years, Thompson has achieved local fame as an artist of many mediums.

Many people have dreams. Local resident Jessica Thompson's is daily reality as an up-and-coming artist in Siloam Springs.

Thompson has been studying art for close to 10 years, and her medium is multi-faceted, she said. Thompson does a lot of digital illustration, but she also loves watercolor and acrylics, as well as fluid art, jewelry, T-shirts, resin work and wood working, she said.

"I think God gave me a talent for it," Thompson said.

Thompson held herself back for many years because of insecurities she felt about her talent, she said.

"I didn't pursue it for a long time because I have friends who are more talented than me," Thompson said. "I always thought I wasn't very good."

A few years ago Thompson went through a hard time which she chose not to elaborate on, but during that time she started drawing and painting more and found art to be an outlet where she could let stress out, Thompson said.

Eventually Thompson realized that if she worked at her craft instead of comparing herself to others, she could do more than what she believed she was capable of.

Putting herself out there has been the most exciting thing, Thompson said. She started an Etsy shop called JessTCreative where she sells her craft and even published a children's book called "That's Not What Bears Say," Thompson said.

The book was published in May on Amazon, Thompson said. She has a second book in the works and is currently doing some readings at local libraries, Thompson said.

"I like to make stuff that people can kind of use ... not just sits on a wall," Thompson said.

She also makes playing card decks with images of DC and Marvel Comics characters, as well as anime, which she enjoys and even illustrates children's books for other people, Thompson said.

During her years in the art world, Thompson has sold many of her pieces at different festivals such as the Dogwood Festival, Homegrown Festival and the NWA Arts and Crafts Festival in Springdale, she said.

Of all her work, the achievement that Thompson is most proud of is painting the blue wings mural on the side of the Siloam Springs Chamber of Commerce building downtown, she said.

This piece taught her how to paint in the public eye because she had to paint as people would walk by, Thompson said. The experience helped Thompson deal with her insecurities, she said.

"No one was judging me and that's really hard," Thompson said.

Despite a modicum of success, Thompson still has a day job, she said. Thompson works security in the evenings at JBU, she said.

Thompson said she enjoys getting to know the students, even those she has gotten to know a little too well because of issues. In November, she will celebrate nine years at JBU, Thompson said.

A former student of JBU, Thompson majored in business but minored in art and illustration, she said. Thompson went back to school when her son was born and earned her degree in Organizational Management in 2016, she said.

When Thompson looks at the future, she said she wants to try to be kinder to herself, she said. Thompson wants to work through her insecurities and continue to grow as an artist.

"I love doing art," Thompson said. "It's like my happy place."