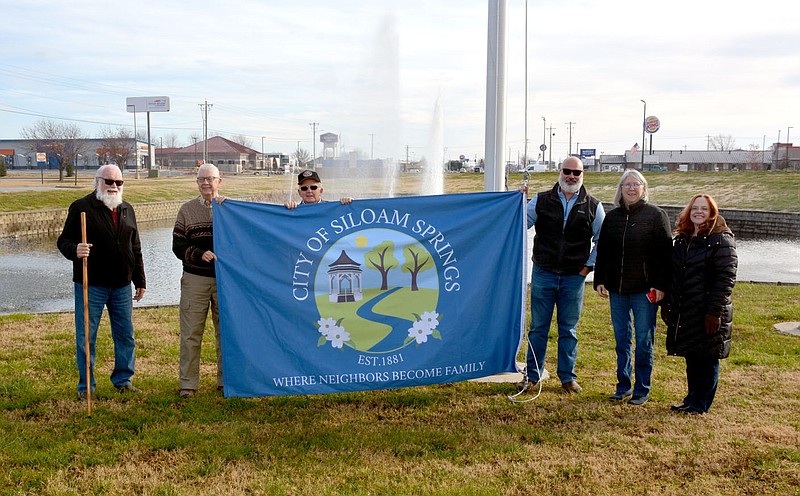 The city of Siloam Springs flew a new city flag on Monday at the Gateway Entrance at the intersection of East Main Street and U.S. Highway 412.

During the city board meeting on Nov. 16, Jerry Cavness, representing the City Flag Redesign Committee, addressed city directors with new designs for the city's flag. The city purchased the flag for $144 plus tax, according to Brandy Rowbotham, the community development administrative assistant.

"Personally, I felt the city flag needed to be updated to reflect more community pride and unity of our citizens," Cavness said at the meeting.

Cavness said he contacted a few citizens and found many were willing to serve on the committee. Members of the committee included Kathy Turner, Randy Torres, Dan Siemens, Lindsay Taylor, Bob Coleman and Patti Eiland.

The committee had a goal to discuss what the current flag looks like; does it need to be updated and, if so, why? what changes would the city like to see? who would pay for the flag and would the city use the flag at other locations? Cavness said.

Cavness presented four different versions of the flag to the city directors. Director David Allen said they did a fantastic job and only suggested that the committee make the font a little big bigger so people can see the flag is hanging.

"You saw a problem and you didn't just express concerns about the problem," Hunt said. "You came up with a solution to present, and I just really appreciate that approach; so thank you for taking the initiative."