OPINION: Vietnam in our past and present 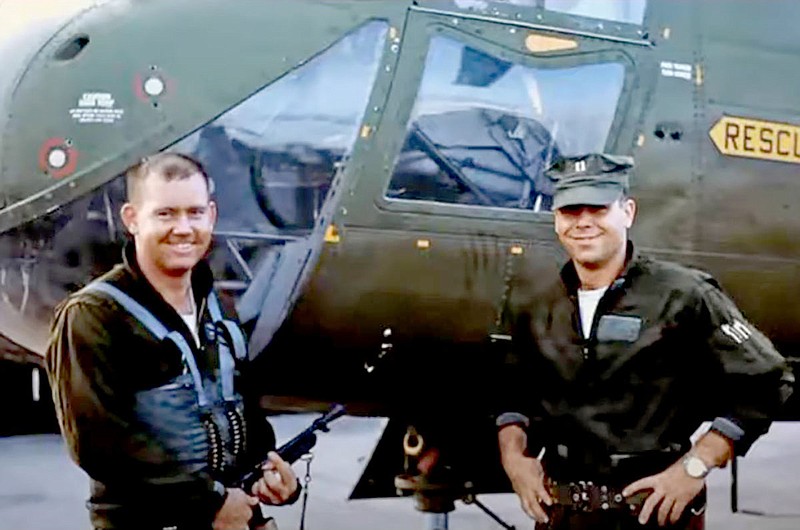 Our region briefly made national news after Richard Barnett, of Gravette, joined invaders at the U.S. Capitol and plopped his feet on a desk located inside Nancy Pelosi's office. Later, as he spoke on camera about what he had done, a yellow flag with three red stripes fluttered behind him. It was the flag of old South Vietnam.

If you review photos of the crowds in Washington, D.C., on Jan. 6, you'll spot more such flags. I first saw them in recordings of protests in Orange County and San Jose, Calif. Conquered by communists, the country of South Vietnam ceased to exist in April 1975. The flag posted behind Mr. Barnett represents a lost country.

The past lives in the present. Until 2020, the year 1968 was remembered as uniquely terrible. It saw an exhausted American president decline to run for re-election. Martin Luther King and presidential candidate Robert Kennedy were assassinated. The USS Pueblo was captured by North Korea, where it remains on display. And the submarine USS Scorpion, commemorated by a memorial in North Little Rock, mysteriously sank in the Atlantic, with the loss of all 99 crew members. There was widespread racial and political unrest.

But first came the Tet Offensive, a sudden attack on South Vietnamese cities, villages and military installations by Northern and Vietcong forces.

Tet marked not just a turning point in the Vietnam conflict but in an American sense of self. "Little did I know," says Jerry Toler, a local veteran who served as a crew chief aboard Chinook helicopters, "that I was participating in one of the major events in United States military and political history."

The Tet Offensive got underway around the time Siloam Springs' school kids were heading home on Jan. 30, a Tuesday. It was Wednesday in Vietnam.

Among the couple dozen Siloam Springs residents in Vietnam at the time was Mike Bryant, who had been a student at John Brown University and was now a Marine Corps helicopter pilot. "Just after midnight we got hit with a lot of rockets and mortars with ground fire," he says. "Then taking off -- so many calls for medevac and ammo resupply. That's how I remember the first day of Tet. So many wounded and killed."

Larry Oxford was in the Mekong Delta. He remembers putting the bodies of Vietcong attackers of the previous night into trucks for transport to mass burial. Up to the early hours of Jan. 31, his months in Vietnam had been relatively quiet. Then came Tet and "everything hit the fan." The first 24 hours were the most intense, but his tour never returned to the comparative calm of before.

Dan Dover was about 20 miles north of Saigon. "We were being shelled at all hours, day and night," he says. "It lasted steady for a couple weeks."

Toler says that from the end of January to the end of February he flew missions 12 to 16 hours a day. "At the time we knew something major was going on, but it wasn't until later we found out the extent and importance of those events, and our contributions."

As with most things related to the Vietnam War, Tet is confusing. North Vietnam's attempt to strike a decisive blow against the South and U.S. forces failed. Its Vietcong ally suffered a major defeat. The Americans had been surprised but quickly rallied. Some think the war might have been won had U.S. forces been free to pursue the advantage they gained in response to the enemy's failed push.

That can't be known with certainty, but it's clear that the surprise of Tet sent U.S. decision-makers reeling. American confidence in its leadership class has fallen since. And Tet gave us an expression we've been reminded of lately as people reflect on virus policies that have led to the ruination of thousands of businesses and stoked untellable social and psychological destruction: "It became necessary to destroy the town to save it."

President Lyndon Johnson already leaned toward not running for re-election, but Tet helped. So did a public statement by Walter Cronkite, the widely-trusted journalist, who publicly labeled the Vietnam conflict an unwinnable stalemate. Actual victory on the ground morphed into defeat on the airwaves. It's not surprising that many Vietnam combatants felt disillusioned.

The shock of Tet triggered a U.S. commitment to draw down in Vietnam. That took time, but South Vietnam fell in 1975. South Vietnamese refugees found asylum at Fort Chaffee in Fort Smith, among other places. Forty-five years later, for reasons worth learning about, some of these and their children are waving the flag of their lost country at rallies and protests in the United States.

The aftereffects of an event that started on a Wednesday morning 53 years ago are still unfolding.

-- Preston Jones lives in Siloam Springs and oversees the website "War & Life: Discussions with Veterans." Contact him at [email protected]