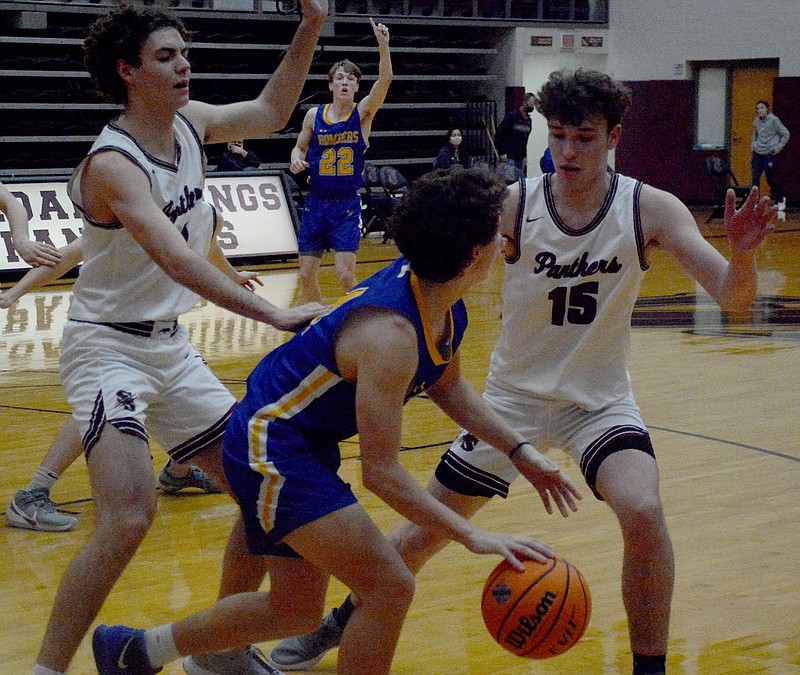 The Bombers, however, didn't panic and rallied to force overtime. In the overtime period, the Bombers outscored Siloam Springs 10-4 to take a 53-47 victory inside Panther Activity Center.

After the game, Mountain Home coach Josh Fulcher said the Bombers needed this win in light of a 68-60 loss at Alma on Tuesday night.

"We have a lot of guys who've been thrown into the fire that have not gotten varsity experience," Fulcher said. "They've been really grinding the last two weeks and trying to figure out some things. We're far away from where we need to be, but I'm just proud that they never gave up. A lot of character was revealed tonight."

Siloam Springs (6-7, 1-1 5A-West) controlled most of the first last, leading 28-19 at halftime and pulling ahead 32-19 early in the third quarter after back-to-back baskets inside by Jackson Ford.

The Bombers cut to the lead to 32-24 midway through the third quarter after a three-point play from Luke Proctor and a jumper from Wyatt Gilbert.

Siloam Springs answered with a stickback from Dalton Newman and a basket from Nick Gray to take a 36-24 lead.

The Bombers started to heat up from long range as Jake McGehee hit a pair of 3-pointers and Wyatt Gilbert hit another trey at the end of the third quarter to pull Mountain Home within 38-33.

"(McGehee) was getting good looks in the first half and the kid can shoot," Fulcher said. "We were getting good looks. We just needed our guys to knock down those shots. That's what it's all about when you're playing a zone that's spread out like that. We've got to attack the gaps and kick out to our shooters when we can and have guys knock down shots. That was important in the second half, knock down some shots."

The Bombers kept chipping away on offense in the fourth quarter and switched defenses going from a man-to-man to a zone, which seemed to confuse the Panthers.

"I think when we switched to the zone, it kind of gave them a little curve ball, threw them for a loop," Fulcher said. "It got them a little stagnant a little bit and we were able to switch between man and zone because they were just giving us such fits in different areas. We kind of did it out of desperation and it worked. That's just kind of the name of the game. Sometimes it works, sometimes it doesn't and tonight it worked."

Siloam Springs assistant coach Chris Cameron -- who was coaching his fifth straight game in place of Tim Stewart, who's out with covid-19 protocols -- said the Bombers' strategy paid off.

"It was enough to change up the tempo and the scheme so that we were confused for a possession or two, and in a close game you can't have a possession or two where you throw it away or don't get a shot on goal," Cameron said. "Obviously they picked up their pressure and we just weren't very poised."

Mountain Home held Siloam Springs to just four points in the final quarter and McGehee hit another 3-pointer to tie the game at 43. The Bombers had a chance to win it at the end of regulation but Gilbert's off balanced shot missed and Reed Ellison's putback attempt was blocked by Ford as time expired.

McGehee scored inside to put the Bombers ahead for good in overtime. Gilbert added a free throw and a jump shot for a 48-45 lead, and McGehee hit the front end of a one-and-one at the free-throw line for a 49-45 lead.

Landon Ward led the Panthers with 15 points, while Ford had 11, Nate Vachon and Dalton Newman each with six, Soderquist four, Max Perkins three and Gray two. The Panthers were without junior guard Josh Stewart for the fifth straight game.

Mountain Home was missing post Mat Jones who was in an ATV accident and is likely out four to six weeks, Fulcher said.

"Anytime you can go on the road and win a conference game against a very talented and well-coached Siloam Springs team, I know it's hard without coach Stewart being here but I thought Chris did a fantastic job," Fulcher said. "They've got a great team. I know they're missing a good one. We're missing a good one, that's kind of 2020, 2021. ... Regardless I'm proud of these guys."

Siloam Springs made the long trip to Vilonia and came away with a 5A-West Conference victory.

"We talked about them having a run at some point and being able to withstand it and respond," said assistant coach Chris Cameron. "The kids made enough plays and were great on the boards."

Jackson Ford led the Panthers with 13 points, while Landon Ward had 11 and Breck Soderquist nine, Max Perkins six, Dalton Newman four and Nate Vachon and Jedi Hunter each with two.

The Panthers are scheduled to host Alma on Tuesday at Panther Activity Center. 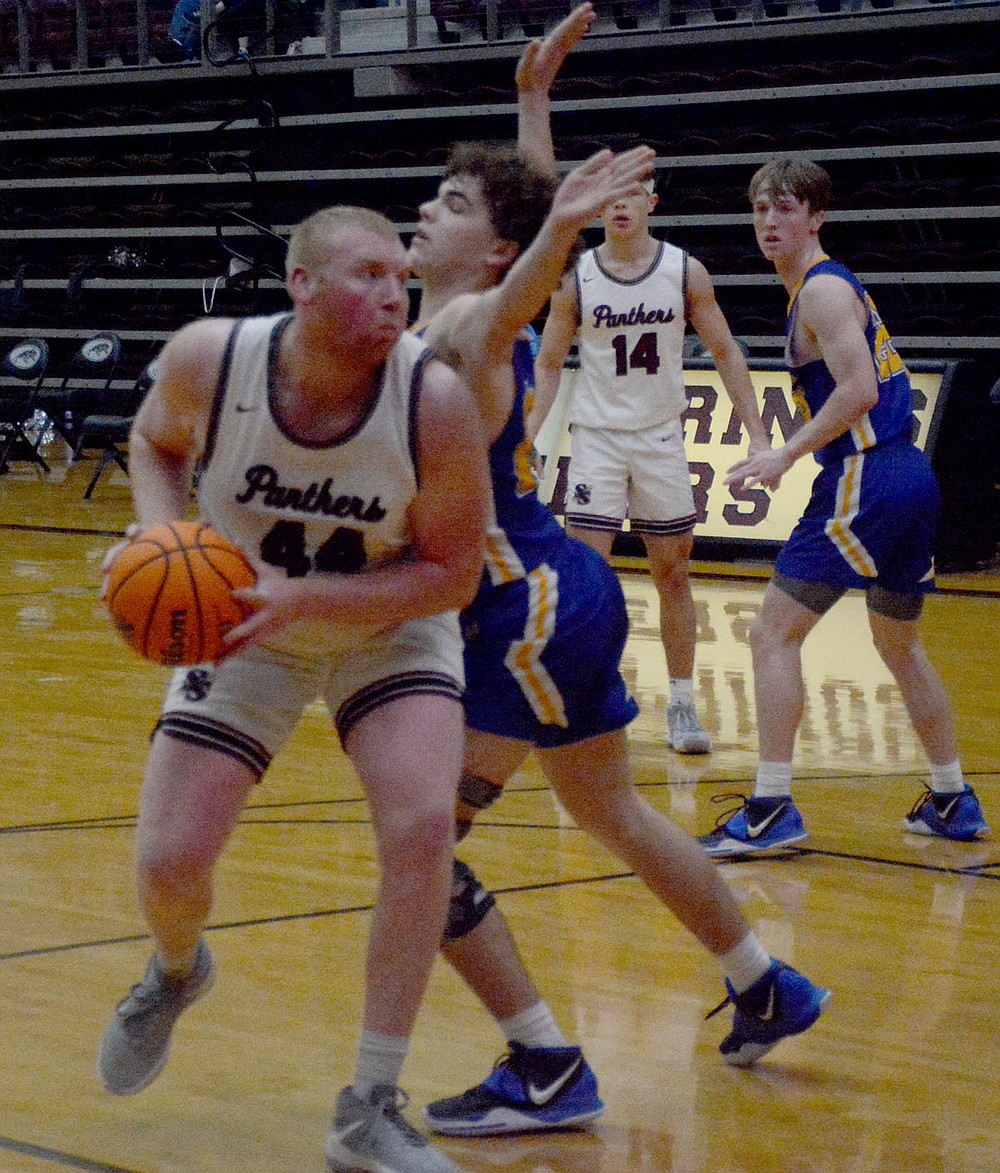 Graham Thomas/Siloam Sunday Siloam Springs senior Jackson Ford works around a Mountain Home defender on his way to the basket during Friday's game at Panther Activity Center. The Bombers defeated the Panthers 53-47 in overtime.
More News