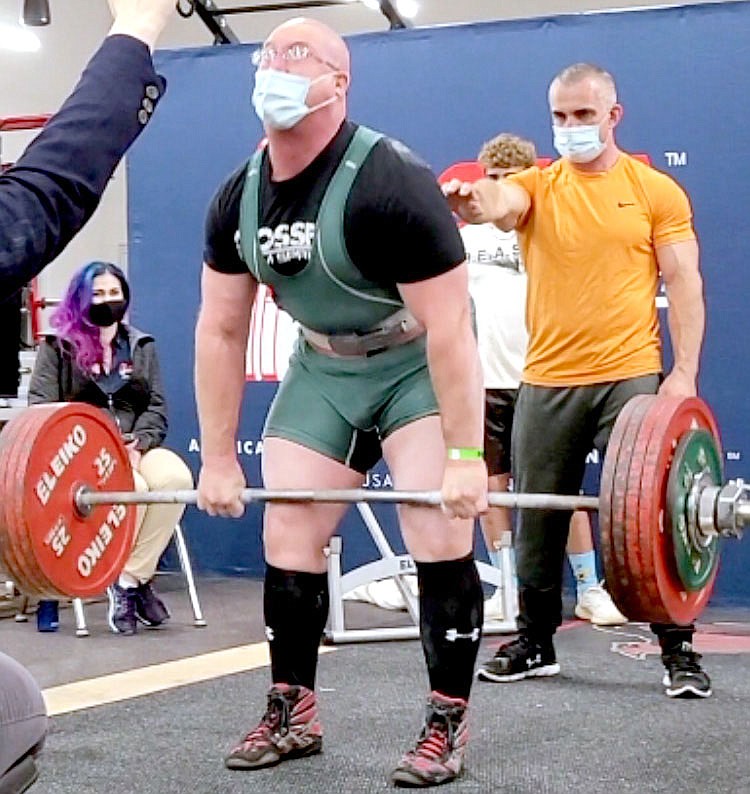 Photo Submitted Michael Spruell (center) is about to receive the signal to lower the weights he has lifted in the Deadlift portion of the meet. Spruell lifted 255 kilograms (562 pounds) during the meet and set a record for -120 Master 1A and 1B Records for Deadlift.

Spruell set four state records in his age and weight division for squat; bench press; deadlift; and total weight lifted, Spruell said. He also set the highest raw squat record in the open division, for all age groups, he said. Spruell placed second overall in the meet, he said.

Spruell started in CrossFit while he was a fighter at Inferno Martial Arts around 2008, he said.

"I realized for power production I needed to learn the Olympic lifts," he said. "A friend said there was a place that coached Olympic lifts."

Spruell's friend, Mary Strange-Hudson recommended CrossFit, which was a few blocks over from Inferno, he said. In 2009, Spruell started doing CrossFit competitions, he said.

Three years later Spruell opened the CrossFit gym in Siloam Springs, he said. Spruell was living in Gravette at the time and didn't think the town was large enough to support a CrossFit gym, but thought Siloam Springs could support the gym, he said.

Around the same time, Spruell's wife Kristy started working at Washington Regional Medical Center, which led the family to move to Springdale in 2015, Spruell said.

During Spruell's time away from CrossFit and powerlifting, he competes in Olympic Weightlifting and Brazilian Jiujitsu, he said. Spruell also home schools his daughter and his best friend's daughter and cares for his 17-year-old son who has autism, Spruell said.

Looking towards the future, Spruell said he plans to compete in CrossFit this year. Spruell also has his eye on the all-time open record in squatting, he said.

He plans to compete for that record at the USA Powerlifting meet this July in Russellville. According to usapowerlifting.com, the date for the meet has not been scheduled.

Spruell will also compete in the American Grappling Federation's 2020 Arkansas Open which will be held on June 26 of this year at the Conway Expo and Events Center in Conway.

He also plans to compete in an Olympic Weightlifting tournament but is not sure when and where the tournament will be.

Becoming a lifter is a long-term commitment, Spruell said.

The lifter shall face the front of the platform. The bar shall be held horizontally across the shoulders, hands and fingers gripping the bar. The hands may be positioned anywhere on the bar inside or in contact with the inner collars.

After removing the bar from the racks the lifter must move backwards to establish the starting position. When the lifter is motionless and erect with knees locked the chief referee will signal for the lifter to squat.

Upon receiving the chief referee’s signal, the lifter must bend the knees and lower the body until the top surface of the legs at the hip joint is lower that the top of the knees. Only one attempt is allowed and the attempt is deemed to have commenced when the lifter’s knees have unlocked.

The lifter must recover at will to an upright position with the knees locked. Double bouncing at the bottom of the squat or any downward movement is not permitted. When the lifter is motionless the chief referee will give the signal to rack the bar.

The bench shall be placed on the platform with the head facing the front or angled up to 45 degrees. The lifter must lie on his back with head, shoulders and buttocks in contact with the bench surface. Feet must be flat on the floor.

Hands and fingers must grip the bar positioned in the rack stands with a “thumbs around” grip. After removing the bar from the racks, the lifter shall wait for the chief referee’s signal “Start.”

After receiving the signal the lifter must lower the bar to the chest or abdominal area, hold it motionless on his chest. The chief referee will signal the lifter to “Press.” The lifter must then return the bar to straight arms length elbows locked. When held motionless in this position, the chief referee will give the command “Rack” to replace the bar on the rack.

The lifter shall face the front of the platform with the bar laid horizontally in front of the lifter’s feet, gripped with an optional grip in both hands and lifted until the lifter is standing erect. On completion of the lift the knees shall be locked into a straight position and shoulders back.

The chief referee will give the command “Down.” The signal will not be given until the bar is held motionless and the lifter is in the apparent finished position.

Any rising of the bar or any deliberate attempt to do so will count as an attempt. Once the attempt has begun no downward movement is allowed until the lifter reaches the erect position with the knees locked.