Wood excited to be with Panthers 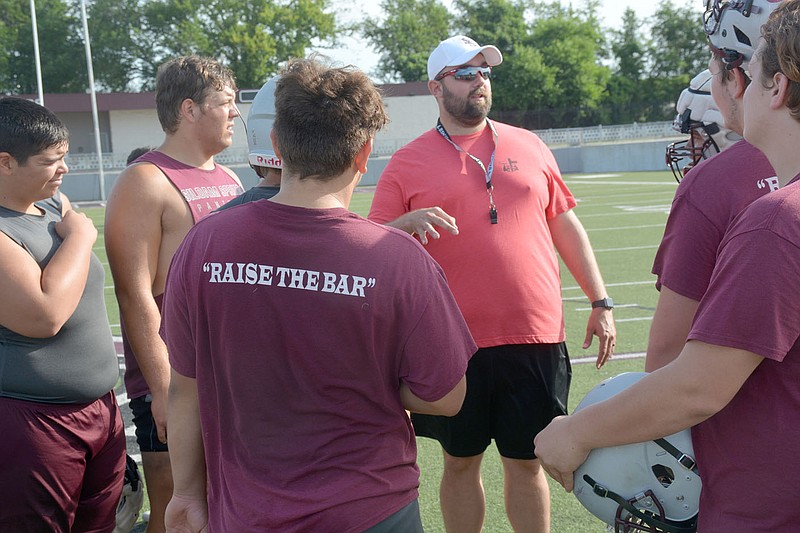 Graham Thomas/Herald-Leader Siloam Springs offensive line coach Justin Wood gives instructions to his linemen prior to holding an O-Line mini-camp on Thursday morning at Panther Stadium. Wood is in his first year on the Siloam Springs staff after spending the last few years at Springdale High.

Justin Wood has seen a lot of good high school football over the course of his playing and coaching career.

Wood was hired June 10 as an assistant football coach at Siloam Springs after spending the last several seasons as the offensive coordinator at Springdale High, his alma mater.

When head coach Zak Clark left Springdale to go to Searcy in May, Wood re-evaluated his own job and applied for an opening at Siloam Springs.

"It was just time for a change," Wood said. "I feel like I'm stepping into a really good situation. We stayed in Northwest Arkansas. My wife's able to stay where she works. My son's able to stay at his day care. I'm moving into a program that's on the rise I feel like."

After getting the job at Siloam Springs, where he will coach offensive line and assist with the ninth-grade team, Wood has dove right in to the Panthers' program, according to head coach Brandon Craig.

"Man from day one, the minute we hired him, he's has his nose in the film, in the playbook and has really latched on to everything we're doing," Craig said. "He has a great understanding, has a great football mind, so it's made it easier. He's done a great job of getting into our system and becoming really familiar with it and has done a great job overall."

"Justin is a hard worker," Craig said. "He's one of those guys, everybody that I talked to when we were looking at hiring him, everybody told me he was the hardest worker on the staff. He's a guy with a very strong work ethic. That's something that's very important to me. I don't like having to tell guys to do every little thing. He's a guy that does things on his own."

"It's something he wanted to do, something he put together, and it's going to make our offensive line better," Craig said. "I think things like that, those factors you don't have to tell a guy to do those kind of things just makes your job as head coach better."

Wood was a member of the famous "Springdale 5" team of 2005 that featured Division I recruits Mitch Mustain, the national player of the year, Damian Williams, Ben Cleveland, Bartley Webb and Andrew Norman, and was coached by Gus Malzahn. That Bulldogs team went on to go 14-0 and winning the Class AAAAA state championship. They averaged 47.4 points and allowed 7.9 points per game.

Wood said he was a backup left guard on that team.

"I played as much as the guy ahead of me did because we were road-grating everybody," Wood said, who added the 2005 Bulldogs were a special group.

"It's one of those things you take it for granted when you're in the moment just because you're young and you don't quite understand how special it is," Wood said. "That was one of the things Coach Malzahn did a great job of is he didn't let us really understand quite how special our group was until it was all said and done and we're out there busting it. It was a special experience and some great guys to be around, great coaches to be around for sure."

After graduating from Springdale High in the spring of 2006, Wood went to the University of Arkansas and volunteer coached at West Fork for two seasons, helping the Tigers win 11 games and reach the state semifinals in 2006.

Wood returned to Springdale High in 2008 as a volunteer coach on a staff that included Clark and Eli Drinkwitz, who is now head coach at the University of Missouri.

Wood joined Clark on the staff at Fayetteville in 2010, 2011 and 2012 as a volunteer and coached the sophomore offensive line. Fayetteville won state titles in 2011 and 2012 with the Allen brothers -- Brandon and Austin -- at quarterback.

After he graduated from the University of Arkansas, Wood took a job at Springdale Lakeside Junior High, working with former Siloam Springs assistant coach Jeff Bowerman, who was head coach at the time. Wood worked at Lakeside for four years, including three as offensive coordinator.

At Siloam Springs, Wood inherits an offensive line that is anchored by 6A-West All-Conference selection Jace Sutulovich, who recently committed to play football at the Air Force Academy.

"Jace is going to be an absolute stud," Wood said. "He's going to be one of the best in the state. I feel like we've got a great group of kids. They work hard. They do the things that they're asked to do. We've just got to continue developing them.

"We don't have a plethora of D-I kids out here, but we have kids who are going to work hard and do what you ask them to do. They're going to compete. When you do that, you're going to win some games you're not supposed to."

Wood is happy that the Panthers emphasize the running game in their offense under Craig.

Along with Sutulovich, Martin Reyes returns at center and the Panthers have been working several players at the other three positions.

"The other three guys are going to be competitive," Wood said. "They're going to do what I ask them to do. We're just not very experienced." 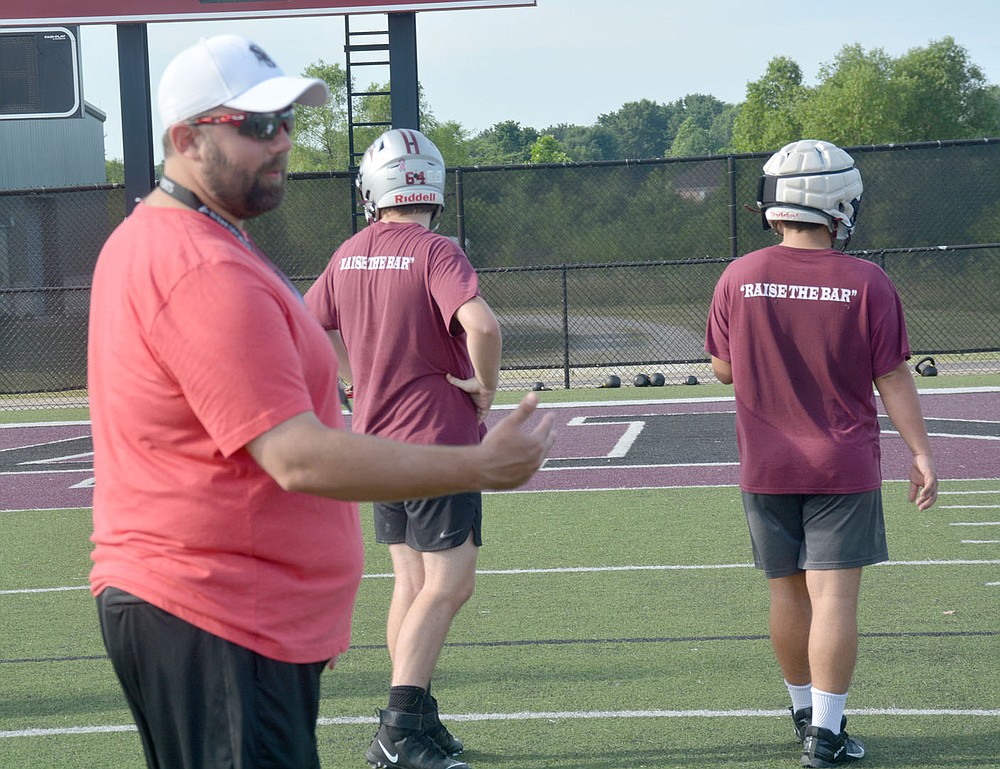 Print Headline: Wood excited to be with Panthers