n Head coach Brandon Craig is emphasizing attendance for the team to get better. by Graham Thomas | June 2, 2021 at 5:20 a.m. 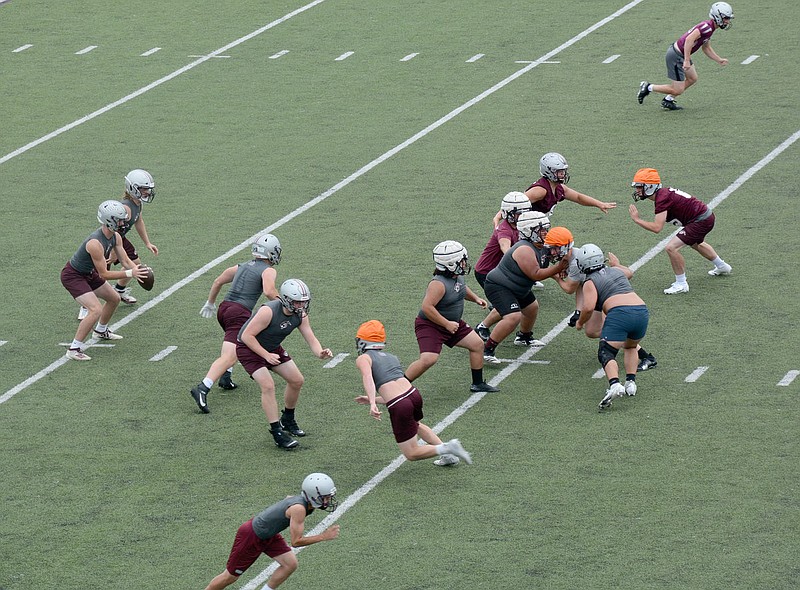 Graham Thomas/Herald-Leader Siloam Springs football players work during practice on the last day of school Friday, May 28. The Panthers are scheduled to begin their summer workout program on Monday, June 7.

"They have to make a commitment to be here," Craig said, referring to the Panthers' offseason workout program, which is scheduled to begin Monday at the Panther Fieldhouse.

"Our biggest problem is lack of attendance," said Craig, who's entering his fourth season as head football coach. "That's something with covid and everything, there's been a dramatic shift with kids. We had terrible attendance throughout the year from the standpoint of daily attendance. They've got to make the commitment to be here. They can't get better if they're not here."

Craig said average attendance is about 40 kids a day.

"We need that to be about 70 for the 10 to 12 (grade) range for us to be successful," Craig said. "We know there's going to be things that come up that are out of their control, but we're looking for guys that aren't making excuses that want to be here, that want to get better."

Panther Pride workouts are scheduled from 7 to 9 a.m. on Monday through Thursdays through June 24. The workouts include lifting weights but also conditioning and football drills at Panther Stadium as well.

"We're running a solid strength and conditioning program," Craig said. "We also spend time working on football skills. so it's not just show up and lift weights. There's a lot that goes into it along with the conditioning and the speed training and the things we do with football related skills. They need to be here and they need to make that commitment if we're going to take the next step. If we're going to stay where we're at then we'll still struggle because we don't have kids that show up."

They made the state playoffs each of the three seasons, including advancing to the quarterfinals in 2019.

Injuries and covid quarantine derailed a promising start in 2020, which included victories against Harrison and Van Buren.

Along with summer workouts in June, the Panthers are hosting a new event, The State Line Shootout, a 7-on-7 tournament on June 19, which will feature 16 teams.

Also in June, the Panthers are participating in a team camp at Farmington on Wednesday, June 16, along with competing in 7-on-7 nights at Bentonville West on June 8, June 15 and June 22.

The Siloam Springs junior varsity team is scheduled to have 7-on-7 action each Monday morning as well.

Panther Pride workouts will resume July 12 after the dead period.

Craig said the team camps are important check points throughout the summer.

Craig said he hopes the team will get to travel for team camp next summer. The Panthers had gone to team camp at Pittsburg State (Kan.) in 2018 and 2019.

"Next year we'll probably be back on track to go somewhere," he said.

The last day of Panther Pride workouts will be July 29 with fall practice scheduled to start Monday, Aug. 2.

Members of the Siloam Springs football team participated in placing American flags on veterans' graves in conjunction with the American Legion on Saturday, May 22.

"Our kids really turned out for that," Craig said. "I was so proud of them. That's near and dear to my heart. My grandfather was a veteran, purple heart in World War II, and I just have a lot of respect for the men and women that served our country. For us to be able to spend a little time doing something like that. you can't put a value on it. It's so great."

Each Siloam Springs football player is being challenged to get at least 12 hours of community service.

Craig said the Panthers will help collect the flags at 10 a.m. Saturday, June 5.

The Panthers helped the Siloam Springs Public Library and Chamber of Commerce at the Dogwood Festival in April, and Craig said he's received good reviews on their work.

He said the team will participate in events with the Boys & Girls Club of Western Benton County later this summer as well as the annual Fill the Bus campaign.

"Hopefully our kids will achieve their goal of 12 hours," he said.