Covington hanging up his whistle 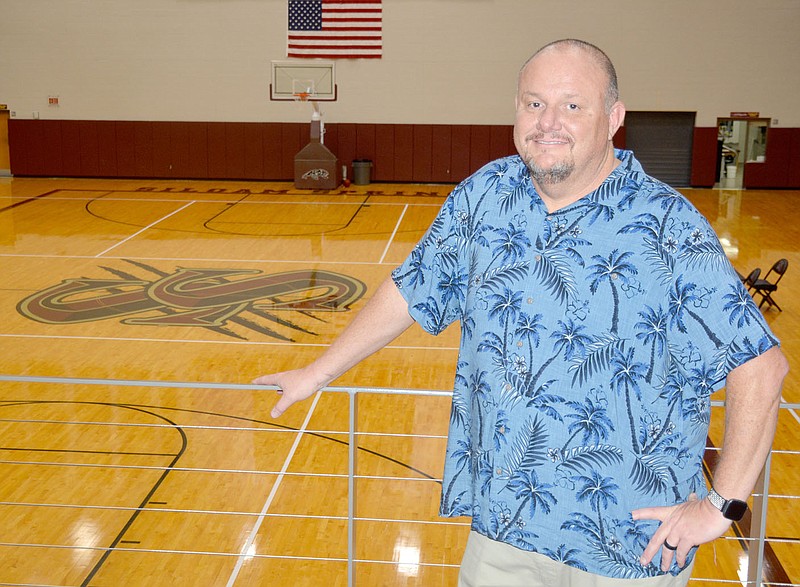 Graham Thomas/Siloam Sunday Bill Covington, longtime coach and teacher in Siloam Springs School District, is retiring after 28 years in the district. Covington has held many coaching roles, including most recently as head ninth-grade boys coach and assistant varsity coach.

Bill Covington has spent the last 28 years teaching and coaching in the Siloam Springs School District, but his favorite part during those years was always making kids smile.

Covington -- an assistant varsity basketball coach, head ninth-grade boys basketball coach and social studies teacher at Siloam Springs High School -- is retiring from teaching and coaching. He recently turned in his paperwork, ending an era that's seen him coach in several different sports in the district and be a part of multiple state championships in basketball and cross country.

The last few weeks have run the gamut of emotions for Covington but, as he discusses his upcoming retirement, he came back to one point that brings him the most joy.

"One of my favorite things -- someone the other day asked what am I going to miss?" Covington said, "and I said 'I'm going to miss making kids smile because I think that's something that I'm gifted at.' I think I can make kids laugh and smile and put a spin on things to make class enjoyable and basketball enjoyable, too. I'll miss that. I'll miss the most, the opportunity the most, to be able to bring happiness to kids."

Whether it's the silly ties he would wear, exposing kids to different music or his laid-back attitude, Covington had a certain magic with kids and adults alike, according to head boys coach Tim Stewart.

"He's been not just a coach but a confidant and a friend and it's a happy day for him, but it's also a really sad day because we've got something good (as a basketball staff)," Stewart said.

Covington began working in the district in 1993 as a physical education aide for kindergarten and first graders at Northside Elementary. The Pangburn native had just graduated after five years at the University of Arkansas, where he met his wife Cindy Dilbeck Covington and married her the summer between his sophomore and junior year of college.

Cindy Covington was from Siloam Springs and the two moved back here where both became fixtures in the school district. Cindy Covington went on to become a principal and is now an administrator in the Springdale School District. The two will celebrate their 31st wedding anniversary on July 14.

"The reason I'm here is because of Cindy," Covington said. "She's the best thing that ever happened to me."

After a year working as a part-time aide in the district, Bill Covington got on full time at the junior high as a reading specialist and a social studies teacher. He also volunteered to coach seventh-grade girls basketball with Marian Kilgore.

The following year, he was hired to coach several seventh-grade sports, including football, basketball and track, along with teaching social studies at the middle school. Covington remembers that year as the first year the middle school was in what is now the intermediate school building.

"Steve Avery was head football coach," Covington said. "We worked together that summer moving furniture in the old high school to get it ready to become just a high school. We took down a bunch of chalkboards."

Covington worked as seventh- and eighth-grade coach for Dale Akins, who was head basketball coach, and he also worked with Norman Hall. He spent time coaching junior high basketball and volunteering on the varsity coaching staff for several years.

He still volunteered on the varsity staff and was a part of the 2008 Class 5A state championship team.

Covington remained in the role of the ninth-grade head coach through this season and, in 2013, he officially joined the varsity staff as a paid assistant coach.

Stewart said Covington is "irreplaceable for a lot of different reasons."

"One is just how his mind works and his thought process and how it meshes and is different than ours and how that turns into something really good," Stewart said. "If the trust is there, and it has been, it's a really good situation for everybody. He's worked for six different coaches. You take these nuggets from all these coaches, and that's irreplaceable. You can't just get that by studying basketball. Bill has that knowledge and he has a way to stay calm in the heat of the battle."

During the 2018-19 ninth-grade boys season, the freshmen Panthers went 17-7, including a 13-game winning streak, and advanced to the Northwest Arkansas/River Valley regional tournament. That group of freshmen will be seniors this upcoming year.

"I think we have a chance to be really good next year and these seniors next year with Josh (Stewart) and Carter (Winesburg) and Jedi (Hunter), with that group of guys, they were awesome," Covington said. "They were fun to work with. ... I think they're going to have a great year next year. I kind of wish the timing had worked out a little bit different where next year would have been 28 (years) so I could be part of that. I know that I'm going to miss it terribly."

Covington's absence will also be missed when the basketball team lifts weights.

"For the last 10 years, he's been the music guy in the weight room," Stewart said with a laugh. "You never know where it's going to go."

"I try to expose the kids to different kinds of music," said Covington. "I'm a huge music fan. I love music. I would like to make that a bigger part of my life and maybe spend some time going to concerts and practicing my guitar and all that good stuff."

Cross country coach Sharon Jones came into the district in 2008 and recalled that for several years it was only her and Covington who were coaching the team.

"He was great," Jones said. "I hated losing him because we worked really well together. He was awesome at working to get those boys figured up. He's always super laid back. I loved having him with us. He did a really good job."

Covington originally joined the cross country staff when Kevin Meythaler was coach. He thinks fondly of his time coaching the sport.

"That was a special part of being a coach here, too," Covington said. I'll miss being around (Sharon Jones) and Chuck (Jones) and all the coaches around here. It's been great getting to work here because we've had a lot of quality people here in Siloam Springs. I feel like I've been very blessed. I'm glad I've been able to work all 28 years here in this one spot. It's always felt like home to me."