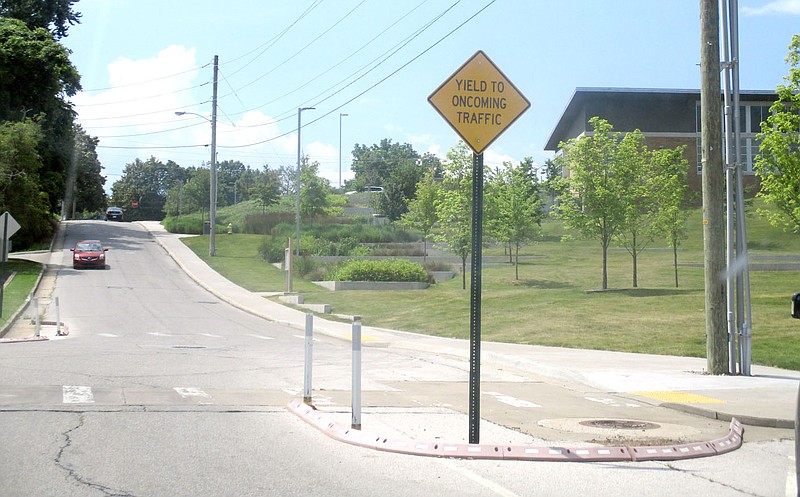 Marc Hayot/Siloam Sunday At the city board meeting on Tuesday Director David Allen talked about this sign which is sticking out in the middle of Maxwell Street. Allen said of the sign "It's just a nuisance and a real mess when you drive down that."

City directors discussed the remaining bike lane features that were still in place at the intersection of North Carl Street and West Harvard Street as well as the ones on South Maxwell Street during the city board meeting Tuesday.

The fixtures, which were part of a 2018 city project to install bike lanes in certain parts of Siloam Springs, have not been well maintained, according to Director David Allen.

City Engineer Justin Bland gave an overview of the bike project and of the removal of the majority of the bike lane features in January of last year.

The bike lane pilot project was installed in the fall of 2018 and left in place for one year, Bland said. He described the original route as staring at Carl and Harvard then going down Harvard to Elm Street, then east on Jefferson Street by the library and then up Maxwell Street.

After reviewing the route, the city decided to design a new bike route, which would start in the same location but bypass Elm and continue down Harvard to Maxwell, Bland said.

Staff also felt keeping the project on Harvard would be more economical, Bland said. The city also added a warning beacon last year at the crosswalk on Harvard and South Mount Olive Street, Bland said. Staff would be willing to remove the features if it is the board's pleasure, Bland said.

Allen said he asked for this review because the flexible curb and the other features left up have not been well maintained. Allen went as far as to describe the flex curb at the intersection of Carl and Harvard as being "run over."

"It doesn't seem to be doing any function that it was designed for and this was brought up in January of '20 to be left for one year and has not been addressed since then," Allen said.

Allen shared pictures with the city board and local media detailing the decay of the bike lane features and has said he drives down that route and has not seen bikers use it. Allen said the speed bumps were fine but called the flex curbs a joke.

Allen also pointed out a pedestrian sign placed in the middle of the road on Maxwell saying it confused people.

"It's just a nuisance and a real mess when you drive down that," Allen said.

Director Mindy Hunt agreed with Allen even saying she has seen people drive around the speed hump on Carl and Harvard and wondered if another option would be better.

Echoing Hunt's comments, Director Marla Sappington said she has also seen people drive around the speed humps and was concerned about kids leaving Southside Elementary and making their way to the Boys & Girls Club.

"It's creating another hazard when people dart around them," Sappington said. "I am concerned about the kids."

Director Brad Burns defended the bike project saying it looked like a good deal and the fixtures were free. Burns also talked about how he has seen many cyclists biking late at night when the humidity was lower.

"I'm just happy we experimented with that, and I think connectivity and bypass and making places safe for kids is still a priority," Burns said.

City Administrator Phillip Patterson said he would take the remaining bike lane features down if it was the board's pleasure and said he wanted to look at the sign Allen was talking about and before deciding what needs to be done.

Community Development Director Don Clark said the sign on Maxwell was to get the attention of people when a car is not parked in the adjacent parking space. He also said the flex curb kept people from venturing over into that parking area.

Clark also commented on the intersection of Carl and Harvard saying the city is aware of people dodging the speed hump and said one option would be to put a speed table there similar to the one in front of the library, but was hesitant to begin construction because the Harvard Street Side Path was scheduled to be constructed in 2020.

Due to the coronavirus pandemic, the side path project was pulled from the 2020 budget and presently the city is looking for grants to build the side path based on recommendations from the board.

• Dedication of utility easements for the 100 block of Dogwood Place.

• Resolution 27-21 concerning a grant application from the Arkansas Department of Emergency Management Hazard Mitigation for the Willow Court detention basin.

• Resolution 28-21 regarding a grant application from the Transportation Alternative Program by the Northwest Arkansas Regional Planning Commission for the North Mount Olive Street sidepath.

• Resolution 29-21 concerning a grant application from the Surface Transportation Block Grant Program by the Northwest Arkansas Regional Planning Commission for the engineering design for street improvements on East Kenwood Street.

• Contract approval in the amount of $58,629 for a printer-copier lease from AAA Business Systems Incorporated.

• Placing Ordinance 21-08 regarding the rezoning of the 2900 block of Cheri Whitlock Drive from A-1 (Agriculture) to C-2 (Roadway Commercial) and G-I (General Institutional) on its second reading.

• Placing Ordinance 21-09 concerning the rezoning of 1803 Dawn Hill Road from A-1 (Agriculture) to R-2 (Residential Medium) on its second reading with Director Reid Carroll recusing himself for personal reasons.

• Placing Ordinance 21-11 concerning the annexation of 12.25 acres of the 2100 block of Highway 16 on its first reading, with Allen abstaining from the vote due to a family member's involvement in the project.

• Placing Ordinance 21-13 concerning a waiver of competitive bidding and a declaration of emergency to have only one reading of the ordinance on its first and only reading.

Photo submitted Director David Allen took a picture of the crumbling speed table at the intersection of South Carl Street and West Harvard Street. Allen said he took the photo to show how the speed table was not maintained. Director Mindy Hunt also said vehicles have been driving around the speed table defeating the purpose of them.