SILOAM PROUD: Local Realtor gives back to her community 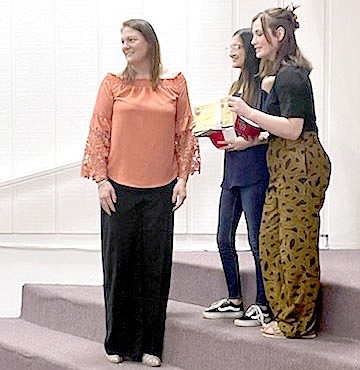 The world has many well-known philanthropists such as Warren Buffett, Bill Gates and Michael Jordan, but there are also many who do their giving quietly. One of those people is Kaci Reed Johnson.

Johnson may not be as well known as the others mentioned above, but she has given back to those who were in need and sponsored others looking to follow their dreams.

Johnson did not start her ministry big, but instead began giving in small areas. At a young age she was already volunteering on mission trips and always coaching little kids in basketball at her local Boys & Girls Club and Upward Sports, she said.

When Johnson was attending Oklahoma Christian University, in Edmond, Okla., she volunteered at the site of the Oklahoma City bombing.

"We did prayer groups, singing, handing out supplies and handing out peppermints to first responders," Johnson said.

When asked about what she remembered most about the bombing, Johnson said it was the smell of death, which she found to be horrible, she said.

In her 20s, Johnson started a Mother's Day Out program. As a single mother of three children, Johnson understood the need for parents to have a break when they needed it, she said.

Over the years Johnson continued to help those she knew. If a friend of one of her children needed a ride, or lunch or even clothing then Johnson would always try to help that person.

"In the past ... I've had a couple of girls that did not have the money for a prom dress or didn't have the money to purchase something special for an event or something they are doing," Johnson said. "So I've helped out in that respect. I tried taking them shopping or got their hair done or their makeup done or had photos done. Something they couldn't afford to do or didn't have the family backing in order to do that."

She also provided those kids with safety zones in case they did not have a safe place to call home. Johnson would let those kids stay with her and her family.

A year and a half earlier, Johnson began assisting fire victims in the Cincinnati/Summers area where she lives. The first recipient of her kindness was Kevin Jackson and his family, who live over on Highway 59.

"That was probably the biggest event that I have been engaged in as far as helping the community, in helping someone with something that was urgent and unexpected," Johnson said.

Another recipient of Johnson's help was Savannah Pearson Stricklen and her family.

On Feb. 11, Stricklen's home caught on fire and she lost all her clothes as well as other items, Stricklen said. Johnson reached out and told the people she knew about Stricklen's situation and helped to organize a benefit for Stricklen and her family.

"Kaci is an amazing person," Stricklen said. "Any time anybody needs something she's the first one there."

Stricklen said when her best friend also had a house fire, Johnson had an entire benefit lined up for her within an hour.

An Amish family in the area also lost their home, and Johnson stepped in to help them by gathering donations. Johnson said she was not short on people willing to help. People from outside the Siloam Springs area offered to donate items to Johnson to help the fire victims, Johnson said.

"She has a big loving heart," said Holly Barton, a closer at Elite Title who worked with Johnson at City title in Rogers. "She thinks more of others than herself."

When asked what Johnson's radius was to help people she said she tries to stay within a four hour radius in all four directions, she said. Johnson said she has family in the Tulsa and Big Cabin areas, plus a plethora of contacts she acquired through her time in real estate.

"She's very thoughtful and she cares a lot about people," Barton said. "She thinks more of others than herself."

Justine Reed (no relation), another realtor at Realty Mart-USA can attest to that.

"She is constantly supporting small business," Reed said. "She shares products on Facebook. When she goes for breakfast, lunch or dinner it's a small business."

Over the years, Johnson began sponsoring rodeo competitors and high school students, she said. Under Realty-Mart USA Johnson has sponsored many events such as buckles for the Aaron, Duncan Benefit Rodeo which was a benefit held at Hat Creek Ranch, Johnson said. She has also sponsored individuals and rodeo teams, Johnson said.

People Johnson has sponsored include Fulton Rutland, a bull rider from Westville, Okla.; Jayco Roper, a bronc rider from Oktaha, Okla.; Kelli Cripps-Tully, a team roper from Gentry; and Tyler Hutchins and Jake Cooper, team ropers from the Rose-Leach area in Oklahoma and Stilwell, Okla., respectively.

Johnson also sponsors a horse drill team called The Renegades who are out of the Siloam Springs/Lincoln area. Johnson said she generally supports organizations and events that share her values which is why she typically supports rodeos and rodeo participants.

"In the center of it is God, USA, you know it's American, and it's safe and it's fun," Johnson said. " It has entertainment and it has the ability to see what people do, what they are talented at from a plethora of areas."

Stricklen, who competes professionally as a barrel racer, said Johnson also sponsors her and her husband Chais Stricklen by paying their entry fees. In return Stricklen and her husband will promote Johnson by wearing Realty Mart-USA shirts when they compete, Stricklen said.

Simmons remembers the first time she met Johnson who was hanging up a banner for Realty Mart-USA and stopped to help her. Simmons said she has been a part of her family ever since.

"She is the kindest human being I have ever known," Simmons said. "The only thing bad I know about Kaci is there are not more people like her."

This year, Johnson raffled a gun both nights of this year's rodeo in Colcord and donated the proceeds back to the Colcord Riding Club.

Most people have hobbies to occupy their leisure time. Johnson does not have any hobbies due to the fact that she is an admitted workaholic.

Johnson has worked for her father's company, Realty Mart-USA, for the last five years where she also tries to make an impact. Fellow realtor Reed describes Johnson as a very hard worker who is constantly going.

Barton said Johnson's job can be very stressful but she doesn't let it get to her. Reed said, because Johnson used to work for a title company, she is able to help people navigate the home-buying process with minimal difficulty.

"She knows every aspect of everything with real estate to explain it easier," Reed said.

Johnson did say if she had to pick something as a hobby it would be spending time with her family.

She is married to Jason Johnson, a life-long resident of Summers, she said. Jason Johnson used to team rope and currently runs a cattle operation. The Johnsons had a turkey farm which they recently sold, Kaci Reed Johnson said.

Along with her husband, Kaci Reed Johnson has three children of her own and one stepdaughter. She has one son Lane Allen, 23, who works at Discount Tire in Fayetteville; twin daughters Braeli and Terra Allen, 21, who presently attend college at the University of Arkansas-Fort Smith and stepdaughter Jaycee Johnson, 20, who is traveling and trying to figure out what she wants to do when she grows up, Johnson said.

Despite all of the volunteering Johnson does, she is not part of any civic organizations due to a lack of time, however, Johnson does also volunteer at Flagstone Church of Christ and helps with the church's Bible camp golf tournament.

"I am involved in other ways but don't have the time to be physically involved," Johnson said.

For Johnson the future looks bright, but she says it takes a community to grow and learn. Johnson said she can always grow and learn, but the experiences she gains from others are what make her stronger.

Her ambition is to continue to serve others as long as God keeps blessing her and people keep working with her, Johnson said. She is grateful to be in the Siloam Springs area because of the way people are willing to lend a hand when needed.

"I mean Siloam Springs loves back big and anyone that doesn't know that hasn't experienced a hardship," Johnson said. 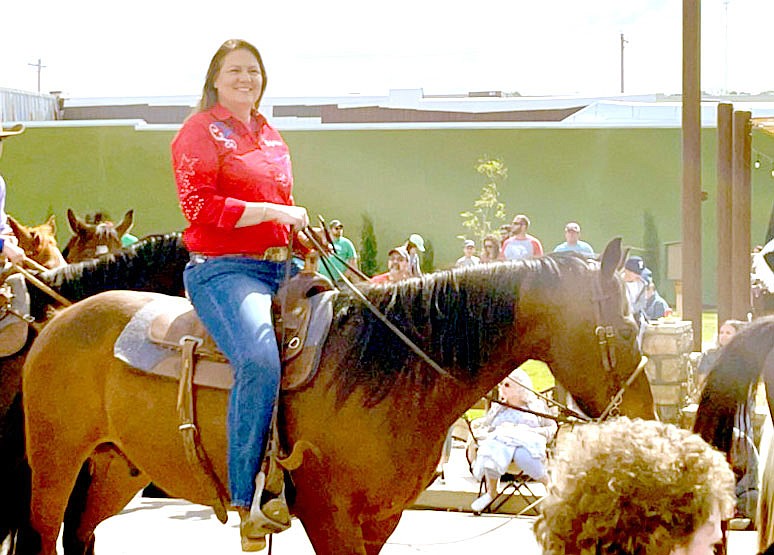 Marc Hayot/Herald-Leader Kaci Reed Johnson rides her horse in the Stilwell Strawberry Festival parade on May 8. Johnson and her father's company Realty Mart were recognized as one of the event's top sponsors. The company donated two guns to the Round Up Club and earned $960 for the club by selling raffle tickets. 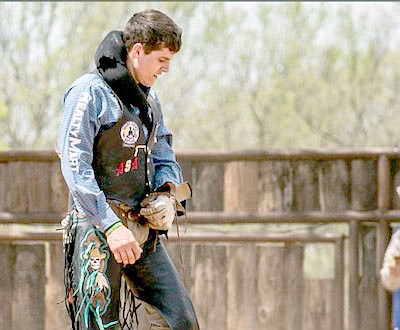 Marc Hayot/Herald-Leader Jayco Roper, a bronc rider from Oktaha, Oklahoma is waiting to compete on May 8 in the Stilwell Strawberry Festival Rodeo. Roper is one of several rodeo contestants sponsored by Kaci Reed Johnson and Realty Mart.

Marc Hayot/Herald-Leader The Stilwell Strawberry Festival Rodeo was held on May 8. One of the rodeo's top sponsors was Realty Mart.

Print Headline: Local Realtor gives back to her community