A Siloam Springs poet collaborates on a Bentonville art installation. March 7, 2021 at 6:00 a.m. 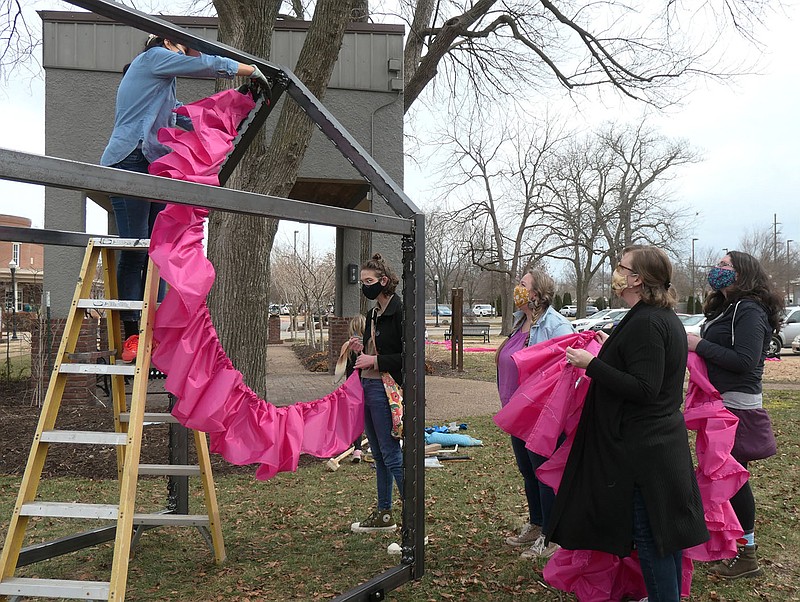 Photo submitted.A team of volunteers installed the sculpture "Guide These, My Hands," on Feb. 27 in Bentonville's Train Station Park.

A new art installation in Bentonville’s Train Station Park offers layers of meaning along with its layers of magenta ruffles.

“Guide These, My Hands,” honors the compassion and resilience of the women of Northwest Arkansas and celebrates traditional folk medicine practiced in the Ozark Mountains. It is the result of a collaboration between sculptor Danielle Hatch of Bentonville and poet and songwriter Traci Rae Manos of Siloam Springs.

The nine-foot tall sculpture was installed on Feb. 27 and will be in place for one year, Manos said. It is constructed from fabric, embroidery thread and steel and features Manos’ poem “Foothills Healer,” hand sewn into a continuous ruffle made out of 126 yards of magenta weather-proof nylon fabric.

The installation was not only a team effort between Manos and Hatch, but a larger community of women throughout Northwest Arkansas. Twenty-two women from across the region, including 11 from Siloam Springs, volunteered to embroider Manos’ hand-written poem into the fabric, Manos said. The poem is also posted on a sign and has been translated into Spanish by Jimina Fernandez of Siloam Springs and into Hmong by Lou Cha, a professor at John Brown University. Emily Baker, a Fayetteville architect on the University of Arkansas faculty, fabricated the steel structure, Manos said.

The Bentonville Public Arts Advisory Committee chose “Guide These, My Hands,” out of 27 proposals, according to committee member Tom Hoehn. The committee is part of the city of Bentonville and encourages and funds public art works, he said.

Hoehn said Hatch and Manos’ work was selected for its support of the PAAC principals, which include fostering diversity and inclusion, and promoting awareness of the city’s culture and history. It was also selected because the community can experience the work in person and learn more about it online, he said. Visitors can scan a QR code that takes them to videos of the poem being read in English, Spanish and Hmong.

“The collaboration involved to create this piece was inspiring,” Hoehn said.

A visual artist and a poet

Hatch is a multidisciplinary artist who works in the mediums of sculpture, performance art and installation art, she said. She earned an undergraduate degree in architecture from Wellesley College in Massachusetts and a her master of fine arts in spatial studies from University of California-Santa Barbara.

Her work explores the female body’s relationship to the built environment, notions of artificiality and power structures, her biography states.

Manos is a folk singer-songwriter and sixth generation Arkansas, according to her biography. She graduated from Siloam Springs High School in 1997, earned an undergraduate degree in English from John Brown University and a master of fine arts in creative writing from the University of Arkansas.

Her work explores connections to kin, land and lore, according to her biography.

Both Manos and Hatch received the Artists 360 award in 2019 from the Mid-America Arts Alliance and Walton Family Foundation. The two women met during a breakout session and connected.

“I think we both appreciate each other and each other’s work,” Manos said. “I needed her expertise as a visual artist and hopefully my poem adds something to her visual art.”

“Guide These, My Hands,” has multiple layers of meaning for Hatch and Manos, from the magenta color, which evokes the flower of the wild burdock plant, known for its medicinal properties, to the contrast between the steel structure and the soft ruffles.

Manos wrote “Foothills Healer” in 2013 and said the poem is about women having compassion for their community, noting that women are often on the front-lines of caring for people who are sick or helping those in need.

Even though the poem was written and the project was proposed before the covid-19 pandemic, it is especially relevant now because of what people have experienced over the past year and the way the poem honors nurses who are using their hands daily, she said.

The creation of the installation, which involved a large number of women, also speaks to the theme of women coming together for their community, she said.

Hatch, who is especially interested in women’s narratives, started her research for the project at the Shiloh Museum of Ozark History, where she learned about the petticoat government in Winslow.

In 1925, just five years after the Nineteenth Amendment to the U.S. Constitution was adopted giving women the right to vote, Winslow elected a female mayor and town council, according to the Encyclopedia of Arkansas.

Even though the term petticoat government was probably derisive, Hatch was interested in re-imagining it into something empowering, focusing on the soft and empathetic power of women. She used the idea as a jumping off point for her creativity, which led to the ruffles, she said.

The sculpture also has connections to the local land, Hatch said. The shape of the structure is reminiscent of the small sheds that can be seen dotting rural Benton County, and the ruffles are similar to the vines that often drape them, she said.

The sculpture plays on the juxtaposition between the hard surfaces of the metal architecture, which is often found in public spaces, and the softness of the fabric, Hatch said. It will also move in response to a visitor’s touch or the breeze, symbolizing women’s responsiveness to their communities, Manos said.

Visitors are encouraged to touch the fabric and go inside the gabled structure, where they can be enveloped in the poem and have a visceral connection with the labor of the women’s hands, Manos and Hatch said.

“Were are wanting to honor the women of Northwest Arkansas for their compassion and resiliency in that they bend in response to the needs of their community but they don’t break,” Manos said.

For more information about the installation and for videos of the poem being read, visit bentonvillear.com/1279/Guide-These-My-Hands. 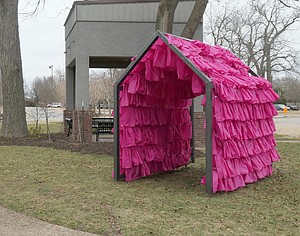 Photo submitted.The sculpture "Guide These, My Hands," honors the compassion and resilience of women in Northwest Arkansas. 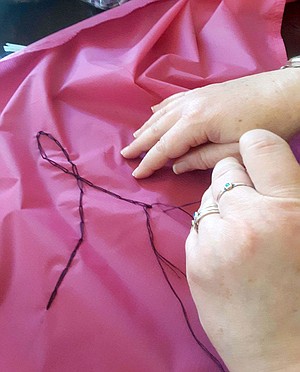 Photo submitted.Twenty-two women, including 11 from Siloam Springs, embroidered the words of the poem "Foothill's Healer," on the ruffles of the art installation "Guide These, My Hands." The installation will be up for one year in Bentonville's Train Station Park. 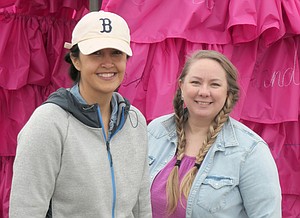 Photo submitted.Visual artist Danielle Hatch of Bentonville and poet and songwriter Traci Rae Manos of Siloam Springs collaborated to create the art installation "Guide These, My Hands." It will be displayed in Bentonville's Train Station Park for the next year.
ADVERTISEMENT