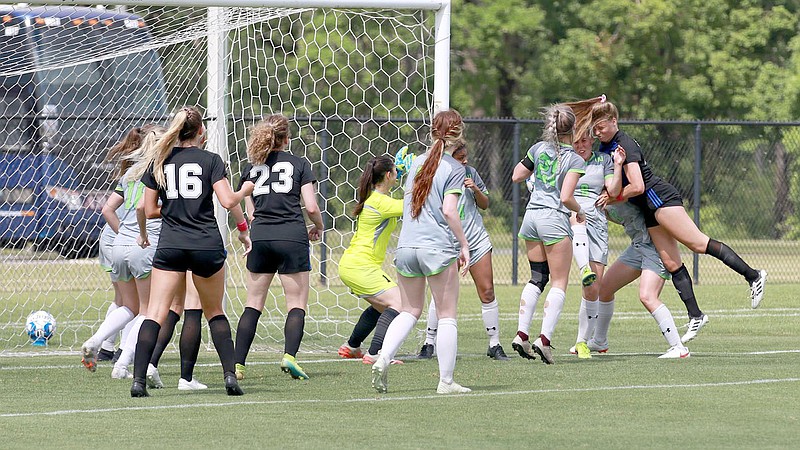 FOLEY, Ala. -- Holding a 14-6 shooting advantage in the final 65 minutes of play, the John Brown women's soccer team able to find the game-winner in regulation or extra time, allowing No. 8 Central Methodist (Mo.) to take advantage of the often cruel penalty kick scenario, which it won 4-2, knocking the Golden Eagles out of the NAIA National Championships after a 1-1 draw through 110 minutes of play.

Central Methodist (20-3-1) out-shot the Golden Eagles 3-0 in the first overtime session, but JBU rebounded with a 4-0 advantage in the final 10 minutes of extra time, including a pair of dangerous free kick opportunities in scoring positions just outside the box. CMU survived the chances though, and forced the contest into penalty kicks.

Junior Paige Kula and sophomore Aubrey Mendez each buried their chances, and senior Caitlyn Logan saved one, while getting her hand on another. Sheila Sanchez made one save herself, and the Golden Eagles missed the frame on the fourth, allowing Central Methodist to escape with a win.

Central Methodist did open the scoring in the 49th minute, when CMU switched fields to the right flank, springing Andrea Villar on goal. Her shot finished tucked just inside the far left goal post from 12 yards – giving Methodist the advantage on Villar's eighth of the season. The goal came moments after the nation's second-leading scorer, Anika Kallash, rang the inside of the right post, but the ball crawled across the goal line and stayed out of the netting, thanks to Logan's fingertip save.

The lead didn't last long however, as the potent Kula–Ryan Winingham combination struck again to level the contest, and this time made some history in the process. With John Brown carrying the momentum after allowing the goal, Kula's corner service found Winingham's head in the box, and was buried past a mass of players to tie the contest at 1-1. Winingham's 11th goal of the season was the first goal scored at the NAIA National Championships final site in program history.

Both teams had opportunity to win the contest late, but Logan came up with one of her most impressive saves of the season. Andrea Villar, looking for her second of the afternoon, ripped a free kick from 10 yards outside the right side of the box, sending Logan diving to her right for the save. The big save turned into a counter-attack that saw sophomore Emma Schoenberg's shot from the right side bend down and hit the crossbar from 23 yards out, as freshmen Gifte Pavatt and Lauren Walter scrambled to put the rebound home. Sanchez pounced on the errant shot attempt to maintain the tied score.

With Central Methodist scrambling, senior Sienna Carballo served up a pair of corner kicks in the final minute, but John Brown was unable to find the game-winner with CMU desperate for the clock to spare their season.

The contest started slowly, and the squads used the first five minutes as a feeling-out process, but the match seemed to break open when Carballo's through ball to senior Vanessa Reynoso sprung her through the back line. Advancing on the ball on the right side Reynoso's shot attempt was blocked by a recovering defender at the last moment – giving JBU the match's first quality chance.

The second came in the 20th minute when junior Megan Hutto's through ball sent Carballo through the back line, but the assistant referee called a close offsides.

The first half featured more possession than chances, as Methodist outshot John Brown 3-1 in a highly defensive period.

The Golden Eagles held the shooting advantage, 15-9, but both teams sent four shots on frame. Logan and Sanchez each finished with three saves apiece through 110 minutes of play.

John Brown finishes the season 14-0-1, undefeated, and set program records in both win percentage (.967) and fewest losses (0) – along with piecing together the deepest run in the NAIA National Championships in program history. The Golden Eagles advanced out of the Opening Round for the second time in program history, following its fourth Sooner Athletic regular season and third tournament titles.