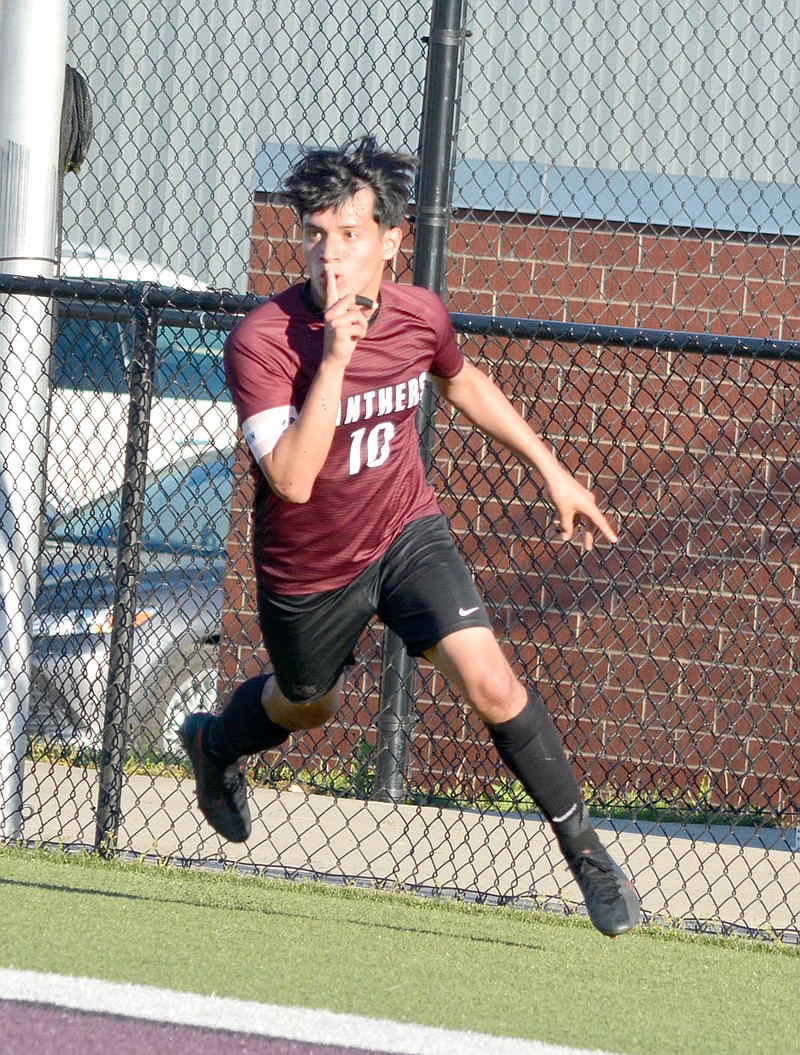 Graham Thomas/Siloam Sunday Siloam Springs senior Franklin Cortez shushes the crowd after scoring a second half goal against Russellville to give the Panthers a 2-0 lead Friday at Panther Stadium.

The Panthers avenged a 2-0 defeat to the Cyclones earlier this season with a 2-0 victory of their own in a key 5A-West Conference match at Panther Stadium.

With the victory, Siloam Springs (14-2, 10-2) remains in third place but has put itself in a position to earn a No. 1 seed for the state tournament -- which is in Siloam Springs on May 13-15 -- with two more wins this week against Vilonia on Tuesday and Van Buren on Friday, both of which are at home.

"We talked about it at the start of this week, one at a time," said Siloam Springs coach Luke Shoemaker. "We understand that if we win out we're conference champs, but it takes one game at a time."

The first half was played to a scoreless tie with both Shoemaker and Russellville coach Jared Fuller and players on both sides getting yellow cards.

Russellville (11-4-2, 9-1-2) had five of its six shots on goal in the first half, but toward the end of the half the advantage seemed to have shifted the Panthers' way.

"We were getting some good looks," Fuller said. "I don't know, we subbed a lot of guys in. I really felt like it would be a second-half game and I wanted to keep fresh legs for them. It just didn't work out."

Siloam Springs took a 1-0 lead less than two minutes into the second half.

Edwin Batres played a free kick into the box and connected with Ivan Sandoval, who connected with a windmill-type shot to score past Russellville keeper Noe Jimenez. It was Sandoval's 12th goal of the season, which ranks second on the team.

"I caught Ivan in the hallway (at school) and I had a dream (Thursday) night where I saw Ivan scoring a goal. ... I told Ivan it's going to happen and sure enough he ran straight to the sideline," Shoemaker said. "It was in his head all day."

Siloam Springs went up 2-0 in the 53rd minute when Junior Garza played ahead to Franklin Cortez. Cortez made a move on a Russellville defender and raced up the home side before cutting toward the goal for a one-on-one opportunity against Jimenez. Cortez kicked it past the Russellville keeper for a 2-0 lead.

"Franklin, that's his go to," Shoemaker said. "Make the run at the line, do some type of 1-v-1 move to the guy who slides to mark him and go to goal, and he did his thing."

It was Cortez' 19th goal of the season.

Goalkeeper Jedi Hunter made five saves and the Panthers' defense recorded their 12th shutout of the season, needing just two more clean sheets to tie the school record of 14 set in 2009.

"Once we finally started to hit our stride, we realized we can compete with them, we can play with them," Shoemaker said. "We played with them at their place. They just happened to get two on us and we made some silly mistakes. Once we settled in and saw that we can do some things well that we talked about and worked on in practice. We went out and did it."

Franklin Cortez, Jason Flores, Junior Garza and Yanni Trinidad all scored second half goals as the Panthers won at Greenwood on Tuesday.

Cortez assisted to Garza for the first goal, and Ivan Sandoval assisted on Cortez's goal for a 2-0 lead. Ronald Mancia played to Flores for a 3-0 lead and Trinidad scored unassisted from 30 yards out to set the final score. 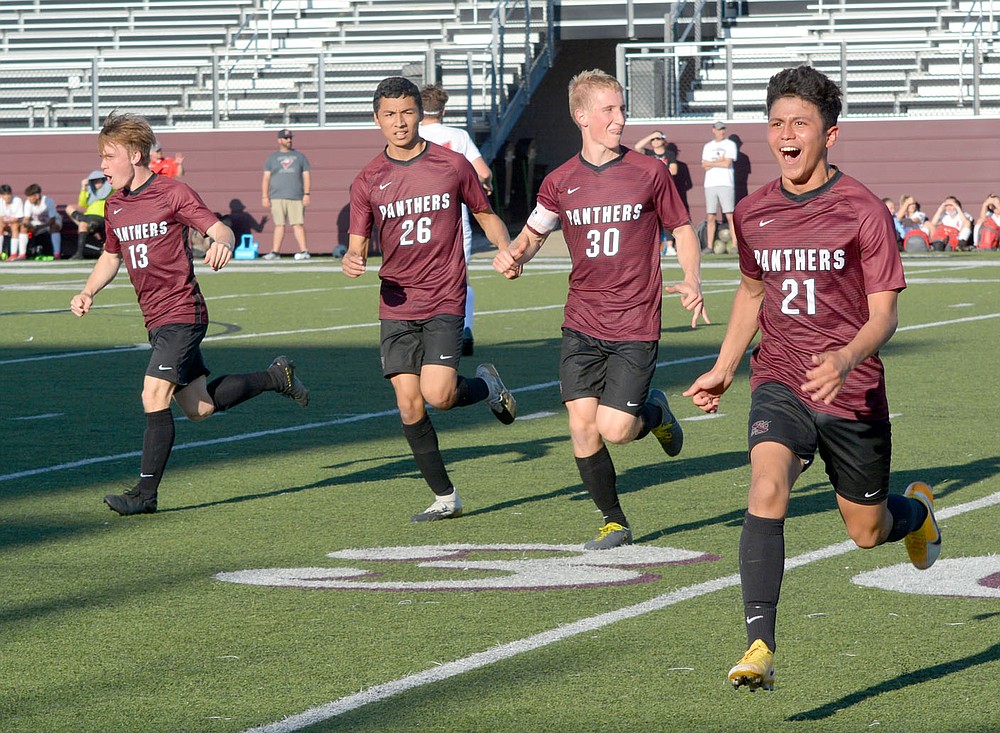 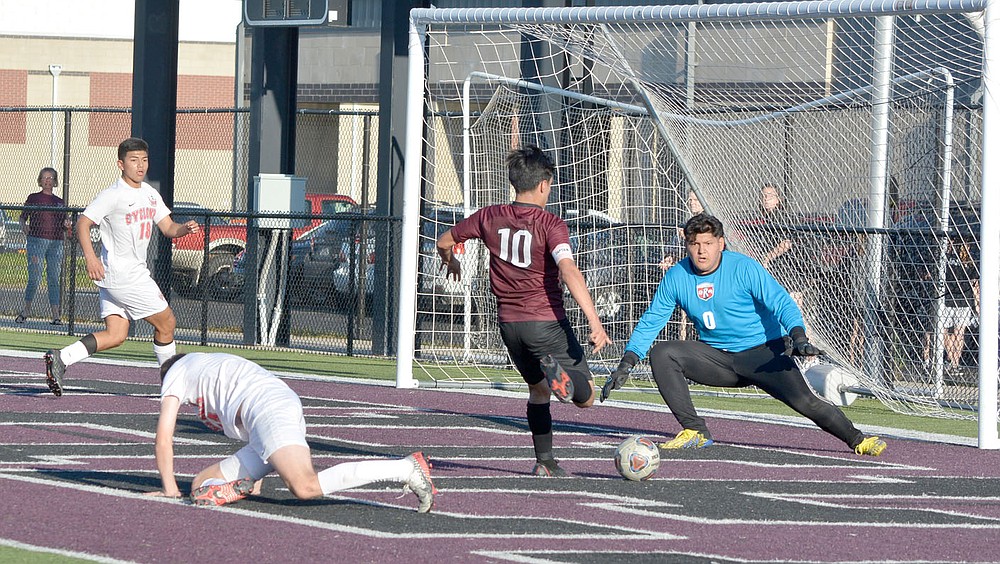 Graham Thomas/Siloam Sunday Siloam Springs senior Franklin Cortez (No. 10) goes one on one with Russellville keeper Noe Jimenez before scoring Siloam Springs' second goal in a 2-0 victory on Friday at Panther Stadium.
ADVERTISEMENT