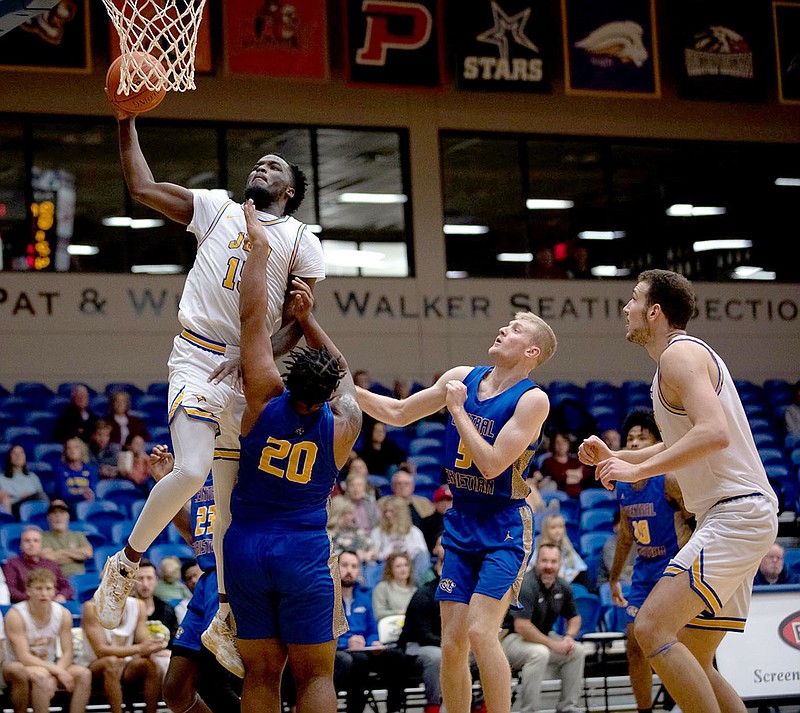 Nothing about the John Brown men's basketball team's 68-61 victory over Central Christian (Kan.) came easy Saturday, but at the end of the night the Golden Eagles were right where they wanted to be in the Sooner Athletic Conference standings.

The Golden Eagles improved to 6-2 overall but most importantly 2-0 in league play with the grind it out win over the Tigers.

"That's the big words you use in a game like this," said head coach Jason Beschta. "We just had to grind it, especially in the second half."

After taking a 41-35 lead at halftime, JBU was held to just 27 points in the second half. But the Golden Eagles held strong defensively as well, limiting Central Christian to just 26 points.

"I think the final score didn't even really tell the complete tale in the second half," Beschta said. "We held them to 26 points, but if you think about it, they banked in two threes in the last few minutes. We really guarded."

The two teams went back and forth early in the first half and were tied at 27 until JBU went on a 14-8 run to close the first half.

D.J. Ellis had a pair of 3-pointers in the first half and Noah Taylor added two treys in the closing run as JBU seized control of the game and would never trail the rest of the way. Rokas Grabliauskas' trey at the top of the key put the Golden Ealges in front 41-35, answering a trey from Central Christian's Reece Warren, who had brought the Tigers within 38-35 just moments earlier.

In the second half, the Golden Eagles were able to convert only 8 of 29 shots from the field, including 1 of 8 from long range.

But JBU did go 10 of 12 from the free-throw line in the second half and only had nine turnovers overall.

"We didn't really score at a high rate, and we'll have to look at some of that, but what I loved was we only had nine turnovers," Beschta said. "As (Central Christian) picked up the pace on some things, we had nine turnovers, only four in the second half. Those are really good things for us moving forward."

JBU led by as many as 14 points in the second half. Central Christian cut the lead to seven after a basket by Isaiah Rivera, but Rivera was hit with a technical foul and JBU built its lead back to 10 down the stretch.

The Tigers did sink a couple of three-pointers off the glass to help trim the final margin.

"I just loved some of the stuff grinding out in a gritty game," Beschta said. "You see our guys after a missed shot or after a turnover or after something that could a negative, coming back and making a good play on the other end. Whatevier it is, that's what we've talked about we need to get to so that one mistake doesn't lead to to two. I think great players and great teams are made up of guys that are going to be able to do that."

JBU finished 24 of 56 from the field and 7 of 21 from behind the 3-point line, despite its three best 3-point shooters Densier Carnes, Luke Harper and Payton Guiot combining to go just 2 of 12 from deep.

"If you look at our team, it was really the three guys that shot it poorly, 2 for 12 total," Beschta said. "The rest of guys were 5 for 9. That's the great thing about having lots of shooters. You hit two or three, we have a chance to hit a bunch becaus we have a lot of guys that can really shoot the basketball. And normally, Deniser, Payton and Luke are going to be the three best. So the fact that we were able to do that when they weren't was big because we haven't always had that kind of depth."

Carnes led the Golden Eagles with 21 points and six rebounds, including a perfect 8 of 8 at the free-throw line, while Harper had nine points, six rebounds and four assists. Ellis and Nemanja Obradovic each added eight points off the bench.

John Brown was scheduled to host Benedictine (Kan.) on Tuesday at Bill George Arena. Results were not available at presstime.

The Golden Eagles are back in action Saturday with an exhibition game at Missouri Southern State. JBU hits the road to Texas for a two-game conference swing, starting Dec. 2 at Southwestern Assemblies of God and wrapping up Dec. 4 at North Texas at Dallas.