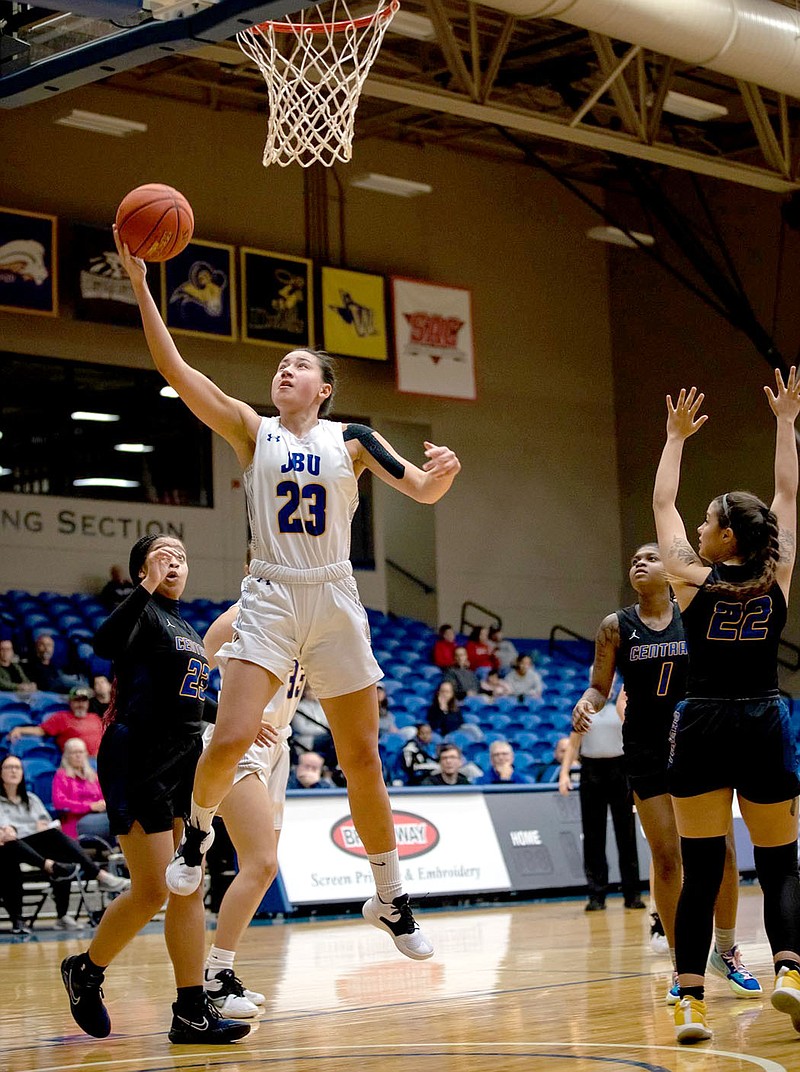 The second and third quarters were a thing of beauty Saturday for the John Brown women's basketball team.

The Golden Eagles outscored Central Christian 43-18 in the middle two quarters and blew open Saturday's Sooner Athletic Conference game in what would eventually be a 81-52 victory inside Bill George Arena.

From an offensive standpoint, it's just what coach Jeff Soderquist wanted to see. The Golden Eagles hit damage from the inside and outside, opening up the offense, which hasn't always been easy so far this season.

"Sometimes we act like we don't know what we're looking for and we're not working together," Soderquist said. "I thought in the second quarter we did a lot better. We were patient. We let some cutters cut. We weren't getting in a hurry. We got some people open. ... Then in the third quarter we came out and we executed, hit the right play, hit the right person, found the right person open. Then the chances of your shots going in go up when you do that."

John Brown led 20-18 after the first quarter but briefly fell behind 21-20 after Central Christian's Jessica Davila opened up the second quarter with a 3-pointer. That was the last time the Tigers (1-7, 0-2) would lead.

Tarrah Stephens came back with a basket off the glass to give JBU a 22-21 lead and kickstarted a 16-2 run to end the half.

Natalie Smith and Stephens each scored baskets and Lisa Vanoverberghe and Lean Anderson scored inside for a 31-23 lead. Smith then cranked a 3-pointer and scored again as JBU led 36-23 at halftime.

After Stephens scored inside to open the third quarter, Smith buried three straight treys as JBU opened up 47-26 lead.

"She's had some big games lately where she's hit some in a row," Smith said. "She's one of the those ones, boy I tell you, she can miss some, but once she gets going she can put them in, a lot in a row. She can really get going."

Emily Sanders and Stephens also hit threes as JBU extended its lead to 63-36 at the end of the third quarter.

JBU would lead by as many as 32 points in the fourth quarter.

Smith finished with a game-high 18 points, while Stephens had 17 and Maddie Altman 10, including a pair of first quarter 3-pointers.

Sanders finished with 7 of JBU's 22 assists. The Golden Eagles outrebounded the Tigers 37-28, led by six rebounds from Altman.

Defensively, JBU held Central Christian to 17 of 56 from the field, including 8 of 30 from behind the 3-point line. Cheyenne Marshall led the Tigers with 12 points, while Destiny Broussard had 10.

JBU was scheduled to return to action Tuesday against Lyon. Results were not available at presstime.

The Golden Eagles return to conference action on Dec. 2 at Southwestern Assemblies of God, followed by a game at North Texas-Dallas on Dec. 4.