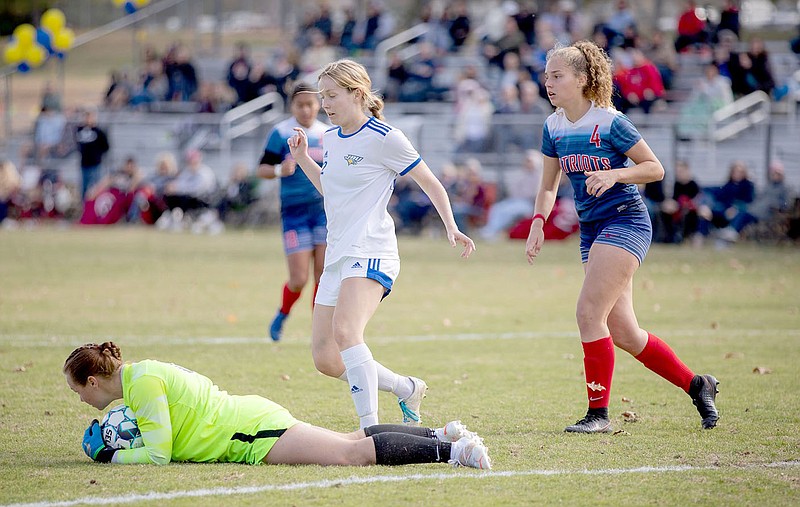 John Brown's women soccer season came to an end Saturday afternoon with a 2-0 loss to Cumberlands (Ky.) in the NAIA National Championships Opening Round finals at Alumni Field.

The Patriots scored goals in the 33rd minute and 78th minute and held a banged up Golden Eagles team scoreless for the first time since Nov. 23, 2019 -- a streak of 37 matches.

Cumberlands, ranked No. 15 in the nation, advances to the NAIA National Championships final site in Orange Beach, Ala., which begins Nov. 30, while JBU's season ends at 18-2 overall with the Sooner Athletic Conference regular season and tournament titles.

"I'm really proud of the team and the season they have had," said JBU coach Kathleen Paulsen. "While it was not what we hoped, there was never a doubt in my mind that they gave their best and did what we asked. We have a phenomenal group of seniors and they will be dearly missed!"

Cumberlands (16-5-2) scored the first goal of the match in 33rd minute for what proved to be the game winner.

Jillian Zurborg's shot was blocked by JBU goalkeeper Caitlyn Logan, but Selena Barnett was there for the Patriots to kick it in as the Patriots took a 1-0 lead.

"Well (JBU is) a team that plays with a ton of heart and intensity," said Cumberlands coach Steve Hamilton. "We knew we had to match that. I think we did. I think some of the things we were trying to do tactically, break on the counter, worked a little bit. ... Overall I think our intensity and our effort was phenomenal."

Then in the second half, the Patriots added a second goal when Laura Navajas Marin scored to give Cumberlands a 2-0 lead. Marin was assisted by Jayden Boelter.

"That was a huge momentum swing for us, and both goals were the same -- off of transition count attack situation, which is stuff we had talked about," Hamilton said. "It's tough on them, but I think that second one was probably the dagger that ended the game."

JBU outshot Cumberlands 5-3 in the sec0nd half, but Cumberlands held the overall shot advantage at 12-10 after an aggressive first half.

Laura Vogt earned the win in goal for Cumberlands with the shutout. Logan made five saves for JBU.

It didn't help that two more JBU players went down with serious injuries, adding to the long list of players that were either lost for the season or missed significant time.

According to JBU Sports Information, John Brown finished the 2021 calendar season with a record of 33-2-1 -- a .931 winning percentage -- with women's soccer being played in the spring and fall seasons.