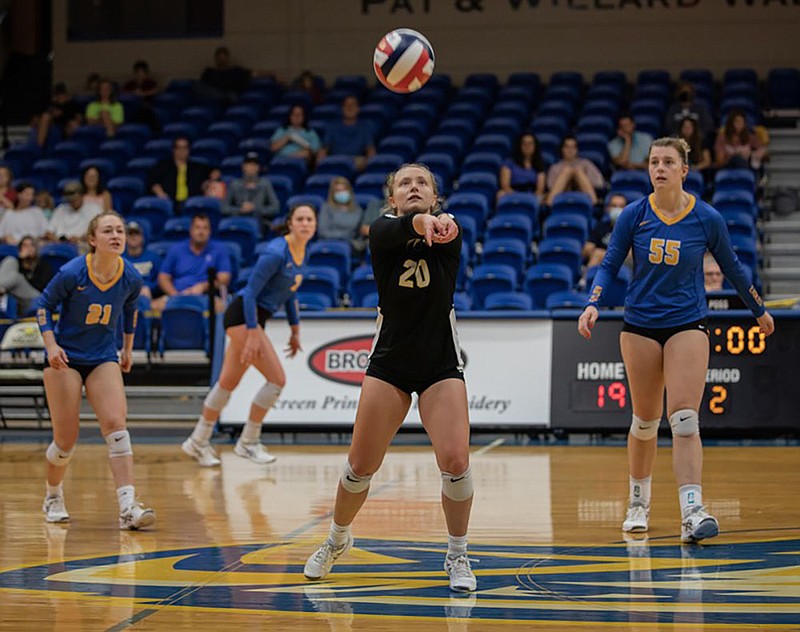 Freshman Taylor Golmen struck for 11 kills and the John Brown serving effort produced 13 aces from the line as the Golden Eagles volleyball team swept past Science and Arts (Okla.), 25-16, 25-10, 25-17, on Saturday afternoon inside Bill George Arena to sweep the season series.

The Golden Eagles moved back to .500, improving to 12-12 overall and 6-6 in Sooner Athletic play, while the Drovers lost their third straight contest, falling to 8-13 and 1-11 in league action.

The JBU passers manufactured a strong hitting afternoon with the Golden Eagles attacking at a .278 clip (37-10-97), as juniors Lauren Cloud and Morgan Fincham each finished with 12 assists apiece.

In the back row, junior Jillian Blackman picked up 21 Drover attacks and finished 13-of-14 (.929) on the serve-receive.

"After a late night and tough five-set loss where we spent great emotional and physical energy, I was proud of our team's ability to come in with a fresh and renewed mindset," said head coach Ken Carver. "Overall, a well-rounded performance by our team to finish off our four match homestand. Now, we'll turn our attention to working on finding success on the road over the course of the next couple of weeks."

After 14 aces against Mid-America Christian (Okla.) on Friday, John Brown responded with another 13 aces Saturday, led by sophomore Joanna Hayes' five from the line in the third set alone. Cloud posted three of her own while Fincham added a pair, as did Milligan. JBU is now 6-2 when serving up at least 10 aces in a match this season.

Samantha Perez and Kat Smith secured six kills each for the Drovers, but there wasn't much offense on the USAO side of the net as the visitors finished the contest at a .021 (22-20-97) attacking efficiency.