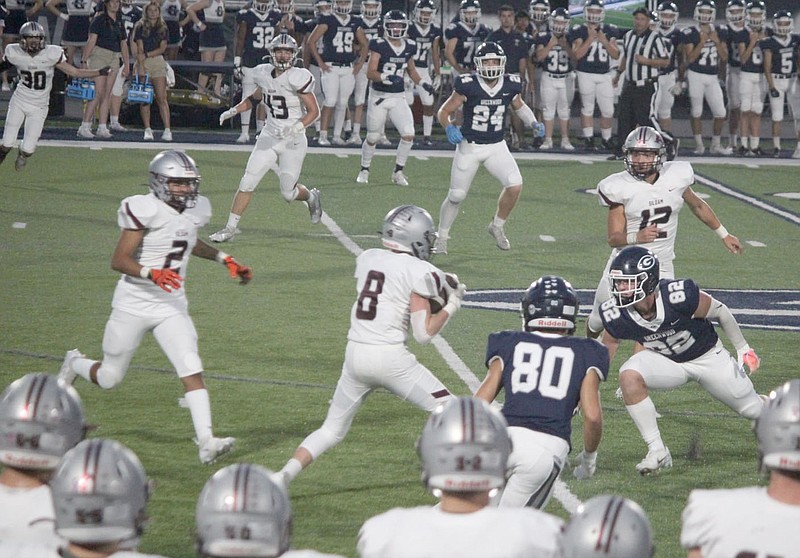 Julie Chandler/Special to the Herald-Leader Siloam Springs junior Nick Driscoll (No. 8) comes down with an interception in the first quarter against Greenwood last Friday. Siloam Springs hosts Lake Hamilton this week at Panther Stadium.

After three straight weeks of battling wide open offenses to open conference play, the Siloam Springs football team must gear up for a different challenge this week.

Undefeated Lake Hamilton, and its misdirection running game, visits at 7 p.m. Friday at Panther Stadium for a 6A-West Conference game.

"We're facing a team that's 85 percent run," said Siloam Springs coach Brandon Craig. "They're going to be very physical up front. They're Wing T-oriented. We can expect a very, very physical night from a defensive standpoint."

Senior Tevin Hughes leads the team with 646 yards on 87 carries (7.4 yards per carry), while junior Justin Crutchmer had 461 yards and junior Kendrick Martin has 449 yards.

Lake Hamilton left guard Chase Jessup (6-4, 282) is a Division I prospect who has committed to Arkansas State. He leads a talented Wolves offensive line.

"They're really big up front," Craig said. "They've got a D-I left guard (Jessup). They've got a running back that really got after us last year, so they've got a lot of kids back. They're very talented. They're 6-0 for a reason. It's going to be a tough game for us, but we're going to have to really grit it out."

Siloam Springs quarterback Hunter Talley rushed for 168 yards and two touchdowns in the loss at Greenwood on Friday. He leads the team with 812 yards on 113 carries with 16 touchdowns. He's also completed 111 of 193 passes for 1,590 yards, 12 touchdowns and six interceptions.

Lashley and junior Nick Driscoll each had interceptions defensively in the Greenwood game.

"You look at a few of our losses, we've actually had the lead in a couple of those games," Craig said. "We just haven't done a good job of playing in the middle of those games. In the second quarter, it was 7-3 at the end of the first quarter, and by the end of the second quarter we're down 33-10. It's one of those things where we have to eliminate some of the mistakes that we're making in the middle of the game to hold on and give ourselves a chance to win at the end."

The games between Lake Hamilton and Siloam Springs have been competitive since the two teams began playing in 2016. Lake Hamilton won a shootout 56-33 in 2016 and then edged the Panthers 34-27 in 2017.