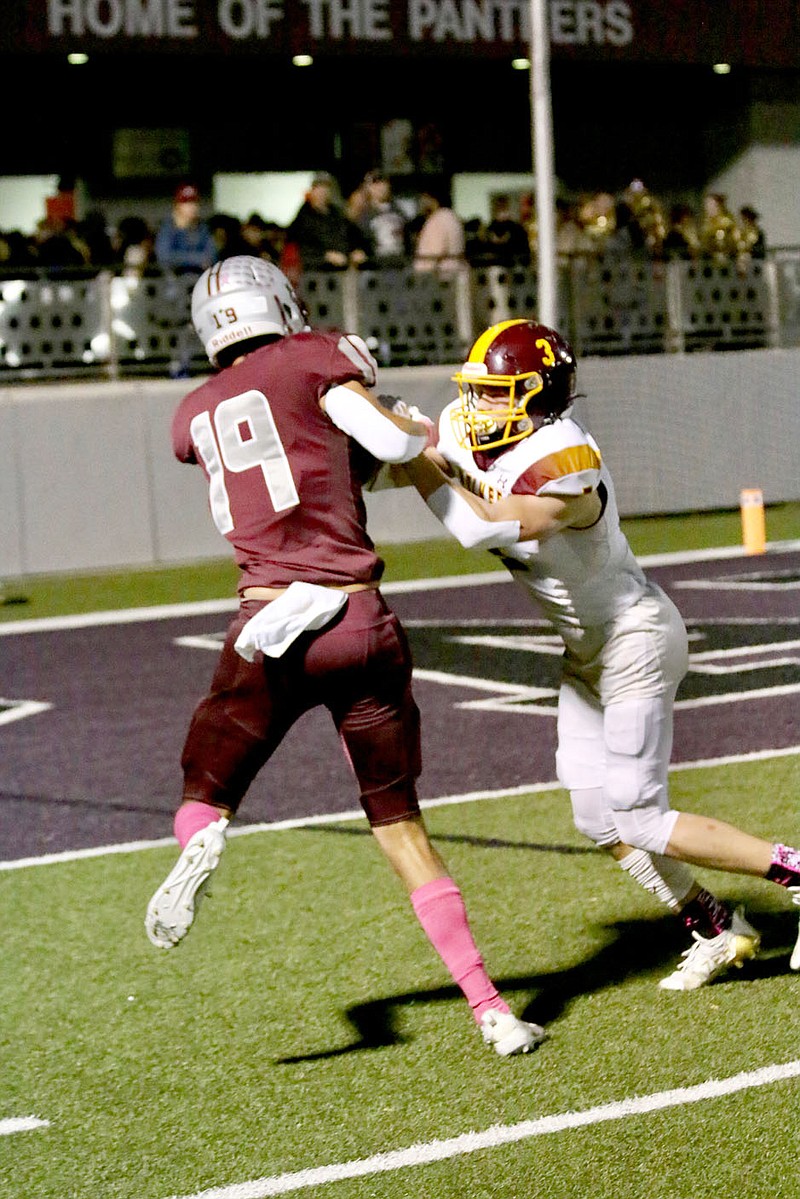 Mark Ross/Special to Siloam Sunday Siloam Springs wide receiver Jonathon Graves wrestles the ball away from Lake Hamilton's Ethan Watson on his way to the end zone for a Siloam Springs touchdown in the Panthers' 42-7 loss Friday at Panther Stadium.

SILOAM SPRINGS -- Lake Hamilton looked every bit the part of the top-ranked team in Class 6A on Friday night.

The No. 1 Wolves jumped all over Siloam Springs with four touchdowns on their first four possessions of the first half and finished off the Panthers with two more scores in the second half in a 42-7 mercy rule win at Panther Stadium.

Lake Hamilton improved to 7-0 and 4-0 in the 6A-West Conference with three games left in the regular season.

Siloam Springs coach Brandon Craig said the Wolves, who were state runner-up last year, are going to be a load to handle down the stretch.

"That's what I told (Lake Hamilton coach Tommy Gilleran) after the game," Craig said. "I think if he can stay healthy and if they keep getting better a little bit each week, they're probably going to be the state champions."

Lake Hamilton finished with 398 yards of total offense, including 337 rushing yards on 43 carries in its Wing T offense.

Senior Tevin Hughes and junior Justin Crutchmer combined to rush for 265 yards and five of the Wolves' second touchdowns.

The Wolves opened the game with Grant Bearden completing a 15-yard pass to Crutchmer into Siloam Springs territory. Four plays later, junior Kendrick Martin took a double handoff 30 yards down to the 1-yard line and Hughes scored on the next play as Lake Hamilton went up 7-0.

Siloam Springs moved into Wolves territory on the next drive as Hunter Talley hit Brendan Lashley for a 48-yard gain. But Talley was intercepted by Caleb Waller at the 1-yard several plays later.

With the length of the field in front of it, Lake Hamilton put together a 17-play, 99-yard scoring drive to go up 14-0 early in the second quarter, capped by a 13-yard run by Crutchmer.

The Wolves forced a Siloam Springs punt and got the ball back for a 76-yard scoring drive.

Hughes broke loose for a 42-yard run and Bearden scored from 25 yards out to take a 21-0 lead.

Talley was intercepted again, this time by Hunter Hanna to set up another Lake Hamilton score, this time an 8-yard run by Crutchmer.

The Wolves got the running clock started with 9:51 left in the third quarter on a 35-yard run by Hughes.

Siloam Springs got on the scoreboard on its next drive on a 22-yard pass from Talley to Jonathan Graves.

Lake Hamilton set the final score on a 57-yard run by Crutchmer in the third quarter.

"They're the total package," Craig said. "He's doing a good job in the secondary. In the past we've always been able to throw the ball pretty much at will on them. They're doing a lot better job in the secondary now. They've got a little bit different wrinkle to their package, so they're doing a really good job on defense. Then offensively they just keep doing what they're doing, so they're a tough opponent and they're hard to get ready for."

Gilleran was pleased with the Wolves' performance, especially defensively, after last week's 42-32 win over Russellville.

"We didn't play real well last week," Gilleran said. "We had homecoming and everything going on. Our kids we went into the game not focused like we need to. We talked and of course we practiced better because we played bad last week. Even though we won, we didn't play up to our potential. We want them to play up to their potential each week, and when they don't we get mad, so expect that of our kids. We want to go back and win a state title. We got there last year and lost and this year our kids are driven to make it back there this year."

The Wolves held Siloam Springs to a season-low 192 yards of total offense.

Talley completed 5 of 16 passes for 102 yards and two interceptions. The Wolves limited him to just 40 rushing yards on 18 carries. Jed Derwin led the Panthers in rushing with nine carries for 47 yards. Siloam Springs rushed for 90 yards on 30 carries.

The Panthers now face a near must-win situation this week at Mountain Home to keep their shot at making the playoffs, though Craig likened the remaining three weeks as playoff-type games anyway.

"We're now in the playoffs," he said. "If we want to keep going, we've got to win two of the next three games. We've put ourselves in the position where we have to go fight the next three weeks and get some wins." 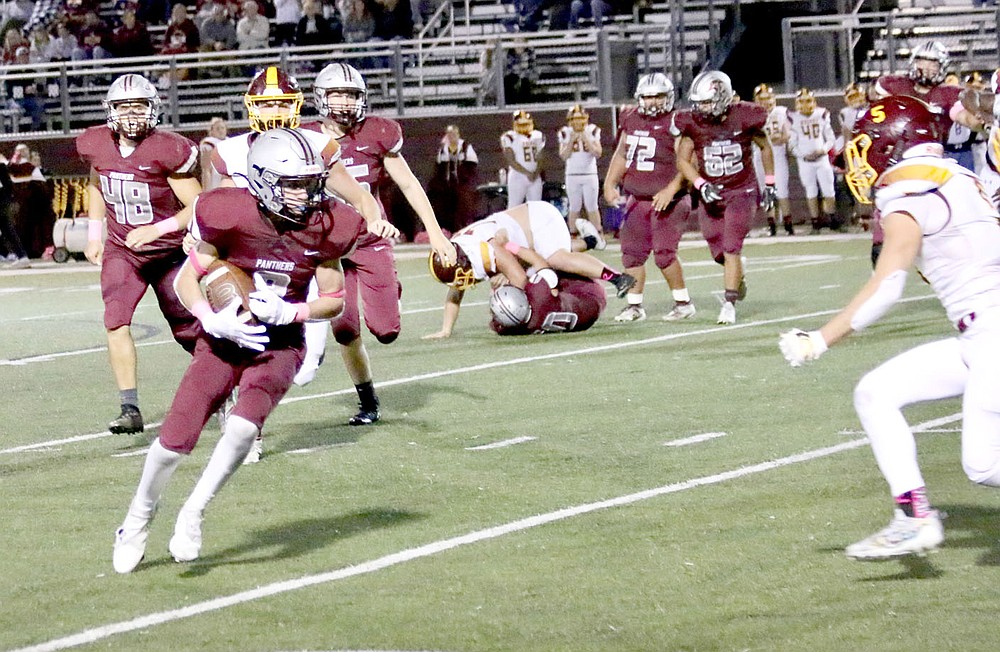