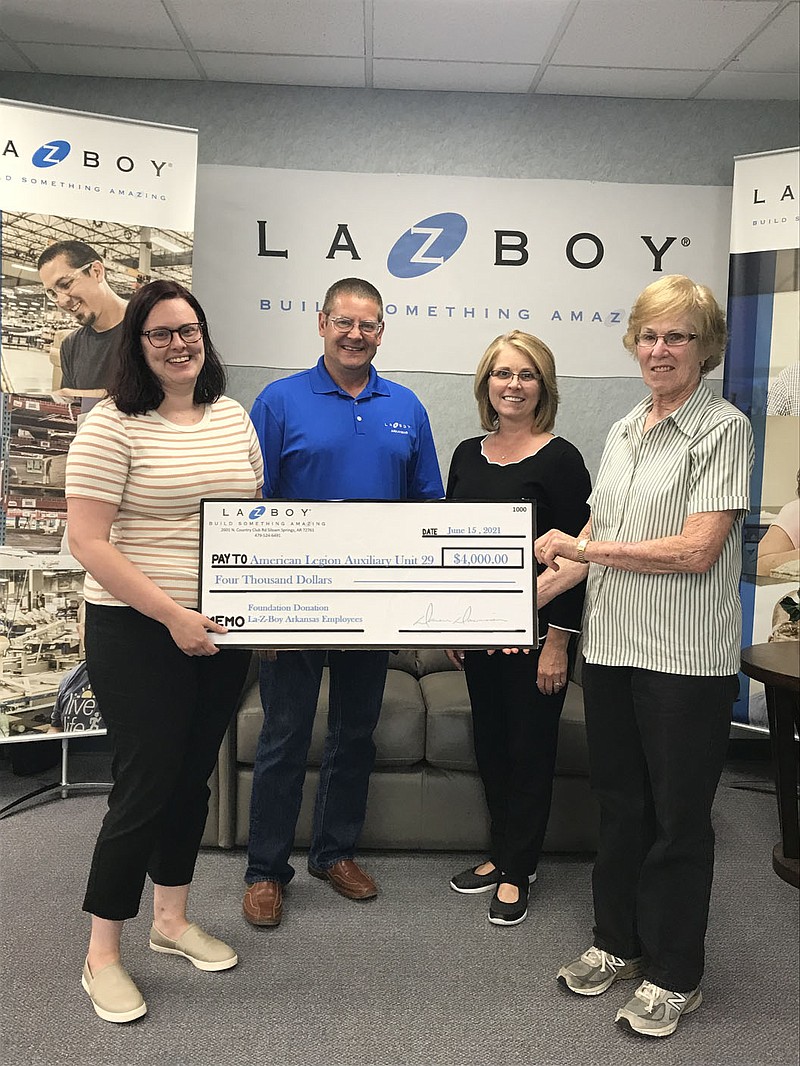 Photo submitted On June 15, Farrell (second from right), presents a check for $4,000 to the Siloam Springs American Legion Auxiliary from the La-Z-Boy Cares foundation. La-Z-Boy Cares helps communities they are in by donating funds to organizations that serve those communities. Pictured with Farrell are Auxiliary President Riley Overstreet (left); La-Z-Boy Environmental Health and Safety Manager Jim Larson and Auxiliary Treasurer Carol Smith.

Audra Farrell grew up serving the community and is now receiving an award during the Outstanding Civic Leadership Event (OCLE) on Sept. 23.

Farrell, the former human resources manager for La-Z-Boy in Siloam Springs and the new office administrator for Pipelife Jet Stream Inc., has volunteered for several organizations, as well as serving on the school board for the Siloam Springs School District.

"When they shared with me and my sister that they wanted to recognize both of us, we were both shocked and surprised and we didn't know how to respond," Farrell said.

Farrell grew up the daughter of Louie and Mary Thomas and the sister of Lucinda Jenks (who is also being awarded during the OCLE later in the month), Farrell said.

Louie Thomas served the Siloam Springs School District for 45 years as an educator and later as a member of the school board, according to an article in the Herald-Leader on Dec. 27, 2015. In 2014, Louie Thomas won the Pioneer Citizen Award, Farrell said.

Growing up, Farrell was in the Girl Scouts and in the 4-H Club, she said. In high school, Farrell served in the Future Farmers of America (FFA) and was a candy striper (now known as hospital volunteers) at the old Siloam Springs Memorial Hospital, she said.

"I completed over 300 hours of community service in my teens," Farrell said.

After high school, Farrell went to the University of Arkansas, where she got her degree in home economics in 1992, she said. Farrell then moved to Russellville in 1993 and got a job working at Arkansas Tech University, where she stayed for six years, she said.

This was followed by working for the city of Russellville as the administrative assistant to the mayor and human resources director, she said.

In 2006, Farrell moved back to Siloam Springs and got a job at Metropolitan National Bank for two years before finding a home at La-Z-Boy, Farrell said.

"La Z Boy has a foundation and it allows this facility to give back to the community where people live and work," Farrell said.

Farrell was actively involved with the foundation and served as the local spokesperson and presenter of checks to local service and educational organizations, she said.

In 2021, La-Z-Boy Cares gave out $116,427 to organizations in the Northwest Arkansas area, according to an email from La-Z-Boy Midwest general manager Daren Davison of the foundation.

"The blessing that Audra has been to us has been through her strong sense of values that has developed her direct team into a world-class HR department, positively affecting those around her inside the plant and outside of the plant," said Davison.

Farrell recently accepted a position to serve as the office administrator at Pipelife, she said. Her last day at La-Z-Boy was Sept. 3, Farrell said. She will begin her new role on Sept. 13, Farrell said.

When asked why she left La-Z-Boy, Farrell said the timing was right in her career for a change, as well as giving her the opportunity to contribute to an organization that is community-minded and will allow her the flexibility to spend more time with her family.

"I'm excited to step into a new role," Farrell said. "I still want to stay connected with the community in order to continue giving back to my hometown."

Over the years, Farrell has served numerous organizations.

She was on the board of directors for the Siloam Springs Chamber of Commerce from 2010-2013, supported the Boys and Girls Club of Western Benton County from 2012-2014, and served on the Office of Human Concern from 2016-2019, the organization that oversees the senior center, Farrell said.

Farrell presently serves on the Circle of Life Ladies Auxiliary Steering Community and on the board of directors for Bright Futures, she said.

In 2015, Farrell filled the remaining portion of her father's term on the school board when he died in December of 2015. A year later she ran for her own term and won, Farrell said. Farrell is one of five school board members serving the school system.

As busy as Farrell is, she still has time for her family. Farrell is married to JD Farrell and they have two daughters, Linsey Futrell and Lainey Samuels, she said. The apple of Farrell's eye, however, is her granddaughter of 10 months, Mia Futrell, she said.

When Farrell is not busy, she enjoys baking sweet treats around the holidays, gardening and spending time outdoors, she said.

Farrell is excited to step into a new role, but is still focused on her family and community, she said. Farrell, who is not comfortable in the spotlight, is still amazed that she was selected for her award.

"I have a passion and a love for helping organizations that put the needs of those who are struggling first," Farrell said. 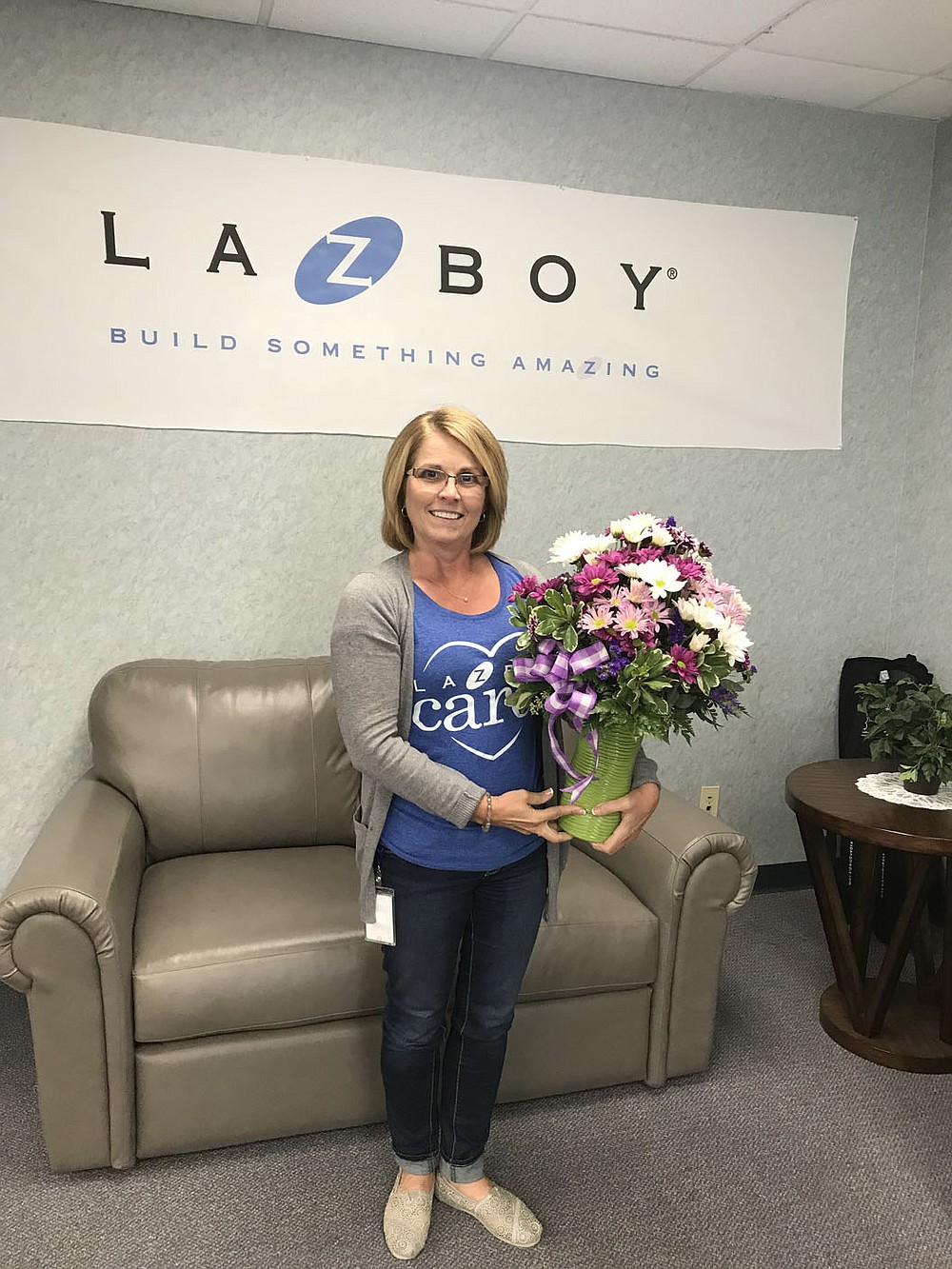 Photo submitted Audra Farrell poses with flowers in front of the La-Z-Boy sign on her last day of work at the furniture magnet. Farrell, who was chosen to receive an award during the Outstanding Civic Leadership Event said she enjoyed her time at La-Z-Boy and will miss the friendships she has developed there.