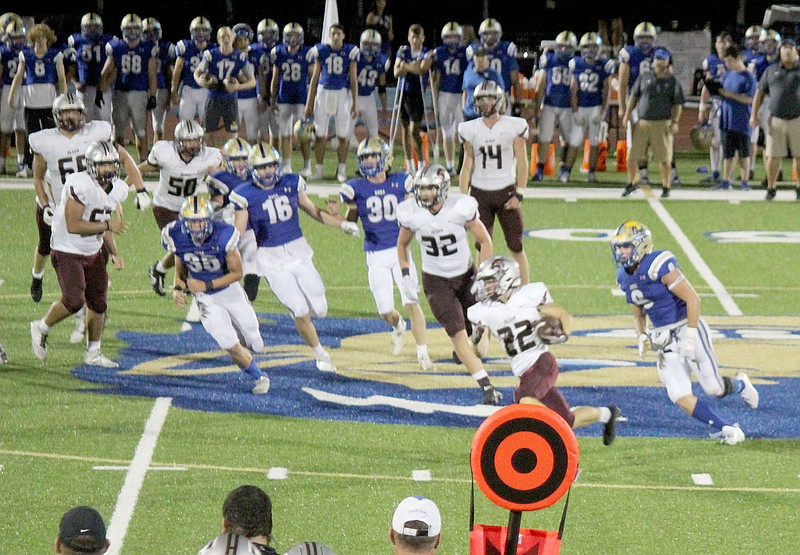 Julie Chandler/Special to Siloam Sunday Siloam Springs senior David Gowin runs around the edge against Harrison on Friday at F.S. Garrison Stadium in Harrison. The Goblins defeated the Panthers 35-31.

HARRISON -- Siloam Springs and Harrison traded blows on Friday night, but it was the Goblins' passing game that made the difference in the fourth quarter.

Harrison quarterback Logan Plumlee completed 12 of 15 passes for 177 yards and a pair of touchdowns in the final two quarters as the Goblins held on for a 35-31 victory over the Panthers at F.S. Garrison Stadium.

The Goblins took the lead with 6 minutes, 37 seconds left on a 29-yard touchdown pass from Plumlee to Talon Stephens.

Siloam Springs answered with a drive, moving the ball beyond midfield, but a crucial holding penalty put the Panthers in long yardage situation and the drive stalled.

Harrison was able to run the clock out to hold on for the win.

"Well it was definitely a good one," Harrison Coach Joel Wells said. "There's no doubt about it. Siloam's very well coached. I have a tremendous amount of respect for them. They beat us last year and we knew we were in for a fight. That quarterback, he's a really, really good football player, and they got an offensive lineman that's probably as good as anybody in the area."

Siloam Springs led 19-14 at halftime after Harrison scored with 31 seconds left in the second quarter when Plumlee found Dylan Block for a 7-yard score.

The Goblins (3-0) then stopped the Panthers (0-2) to open the second half, got the ball back and took the lead when Plumlee threw a 11-yard touchdown pass to Kaden Quandt. Earlier in the drive, he hit Stephens for a 26-yard gain.

"What was huge was scoring right before half there and cutting it to one score," Wells said. "Then we were able to come out [in the second half] and get a stop and score fairly quick. We got up on top. We knew it was going to be a fourth-quarter game. Our guys have a lot of grit. We fight and we fight to the end and we've won a lot of games like that."

The two teams traded leads as Siloam Springs answered with a scoring drive that saw Hunter Talley score from 3 yards out to go up 25-20.

Harrison responded with a score on a 5-yard run from Beck Jones. On the drive, Plumlee found Sloan Barnett four times for a combined 64 yards.

Siloam Springs again came back with a score as Talley hit Brendan Lashley for a 36-yard gain and later found Jonathon Graves for a 19-yard touchdown to go up 31-28.

"Our team competed well," Siloam Springs Coach Brandon Craig said. "It's tough to come in to an environment like this and win, but they gave it everything they had and I felt really good about what they did. Couple of plays here and there, we've got to clean up some special teams issues, but couple of plays here and there and we win the game. Really two hard fought teams out there getting after it."

Siloam Springs allowed a Harrison touchdown on the Goblins' first drive, but the defense settled in and forced several stops, aided by tremendous defensive pressure from the defensive line.

That allowed Siloam Springs to score 19 straight points to take a 19-7 lead.

Talley scored on a 13-yard run, set up by his previous run of 16 yards and a 36-yard pass to Lashley.

Siloam Springs' second touchdown was set up by a 55-yard pass from Talley to Christian Ledeker to the 2-yard line. Talley ran in from two yards out on the next play.

The third score came when Talley hit Graves for a 14-yard TD pass.

Harrison now has a bye week before hosting Farmington on Sept. 24 to open 5A-West Conference play. Siloam Springs hosts Pea Ridge this Friday in a makeup game from Sept. 3, which was postponed by Pea Ridge due to covid-19.

"We've got to keep working, keep being fundamentally sound and just hope that our kids will go make plays," Craig said.