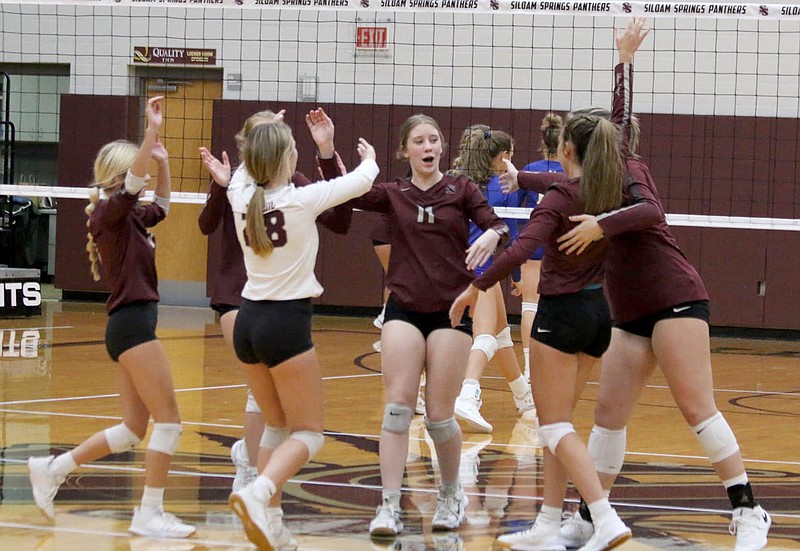 Mark Ross/Special to Siloam Sunday The Siloam Springs volleyball team celebrates after scoring a point against Mountain Home on Tuesday.

Mountain Home enjoyed a balanced night offensively as the Lady Bombers remained undefeated with a sweep at Siloam Springs on Tuesday.

Georgia Burnham had 10 kills, while Kendall Carter added eight and Carson Schmitz chipped in seven as the Lady Bombers rolled to a 25-18, 25-12, 25-9 victory to open 5A-West Conference play.

Mountain Home went on a 9-1 run midway through the second set to take control, and the Lady Bombers rolled out to a 6-1 lead and never looked back in the third set.

After kills from Carter and Lindsay Jensen, the Lady Bombers led the third set 18-3. Carter and Emma Wilber would add kills and Jensen had an ace and a kill late to finish off the Lady Panthers.

Emma Norberg and Faith Ellis each had four kills for the Lady Panthers.

The Lady Panthers were scheduled to play in the Little Rock Christian Tournament on Saturday. Results were not available at presstime.

Siloam Springs is back in action at home Monday against Huntsville before hosting Greenbrier in a conference match on Tuesday.