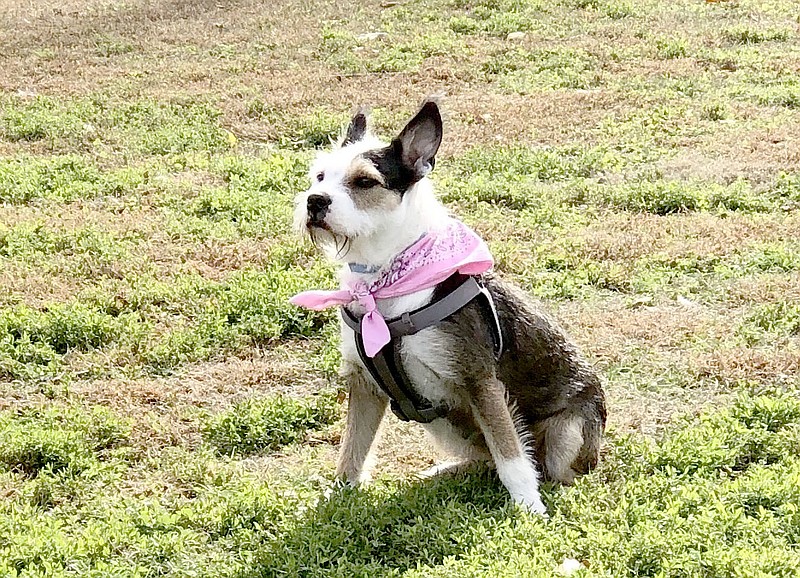 Photo submitted Mamma Shilo watches as her rather large pups play and beg for treats during the canine reunion on Nov. 20. Shilo's owner Shawn Kauffeld said the puppies intimidated Shilo because they were much larger than she was but Shilo loved going up to all of the humans for pets and treats.

A family of rescue puppies gathered for a six-month birthday celebration on Nov. 20 at the Siloam Springs Dog Park.

The family of six puppies reunited after being adopted by different families in August and September. Owners of the puppies range from Siloam Springs all the way to St. Louis, Mo.

Birth of the puppies

In May, Shawn Kauffeld was sitting on her porch and when she looked up she saw a dog standing beside her car, she said.

"When she came up to the house we didn't know what we were going to do with her," Kauffeld said.

As she was caring for Shilo, Kauffeld realized the dog was pregnant. Eight puppies were born May 25.

Kauffeld was not able to care for a litter of puppies so her nephew, Jesse, contacted Tailwaggers. Tailwaggers gets a lot of calls for stray puppies and kittens, said Tailwaggers Representative Tina Berrios.

Berrios got a response from Jennifer King, who had seen the post on Tailwaggers' Facebook page and said she would take all of the puppies, Berrios said.

"I had been out of my routine and needed something that would force me out of bed at 6 a.m. and go," King said.

King asked her husband Andrew King and to her surprise, he said yes. The Kings had adopted shelter dogs but found that fostering six puppies was quite different.

"We realized we hadn't had puppies for 20 years and we forgot how consuming they were," King said.

She got the puppies on July 26, when they were eight weeks old, King said. For the Kings, it was little things like potty training the puppies and keeping them in the house when they received their shots from Tailwaggers, King said.

While the Kings worked with the puppies, Tailwaggers was trying to find the puppies permanent homes, King said.

Kauffeld was able to see the puppies while they were in they were being fostered, King said. King believes the puppies are Amstaffs (American Staffordshire Terrier), she said.

Around August or September, the puppies were adopted out and King sat in on the adoption interviews, she said.

As a former science teacher, King named all of the puppies after scientists. Newton, who was named after Sir Isaac Newton, was the first to be adopted. Newton found his permanent home in Fayetteville with Mary and Buddy Schleuter, King said.

Mary Schleuter, who had recently lost her dog of 15 years, saw Newton's picture on Facebook and went to meet him at the Siloam Springs Dog Park, she said.

"He picked me and I picked him," Schleuter said. "He is just a sweetheart and I love him very much."

Two other puppies renamed Carson and Cody now live in Springdale with Rhonda and Justin Hazen, King said. The Hazens bought the two puppies when they were about three-months-old, Rhonda Hazen said.

Hazen said she has met up with King for play dates, including the half-birthday party where they had balloons, cupcakes and gift exchange, Hazen said. She credits King with maintaining contact with everyone.

"Jennifer's been great," Hazen said. "She has been the glue that holds it all together. She's the one that kept us all together and you can tell she poured her love in all the puppies."

Theo, named after a student of Aristotle, was the only puppy to leave the state as he was adopted by a Amanda Oreszko in St. Louis, King said.

Oreszko declined to be interviewed saying only she discovered Theo when she was searching for dogs in Branson.

Berrios said Tailwaggers has 14,000 followers across the state and other states as well as Canada, so she believes Oreszko found Theo from a share.

Kauffeld said she gave away two other puppies from that litter before her nephew contacted Tailwaggers, she said.

Tailwaggers had posted the story of the reunion on their Facebook page and one person commented that they owned one of the two puppies given away.

King has been in contact with her and the owner of the other puppy and hopes they will come out for the birthday celebration in May.

Most adoptees don't keep in touch with the foster families, but this time the opposite happened, King said.

It started with King checking up on the puppies and the adoptees asking for advice about food and events Eventually, the families formed a text network, King said.

"We text back and forth," King said. "It's almost like a family. I think we text each other whenever we get into a weird situation."

Playdates were arranged between the families so their puppies could bond, with King even traveling to St. Louis so Theo could spend time with Curie and Percy, she said.

King doesn't mind the drive because her sister lives 15 minutes away from the family that adopted Theo, she said. Finally, it came time for all of the puppies to get together.

The families decided to get together around the time of the puppies' six-month birthday, King said. Since the puppies'half-birthday fell on Thanksgiving, the families agreed to meet on Nov. 20 at the Siloam Springs Dog Park, King said.

King wasn't sure how all those dogs and owners would interact together, but the dogs all got along and the owners helped each other out, King said. King's daughter baked doggie cupcakes for the pups, Jennifer King said.

"Overtime when we had our big party they were just running up to whoever to get pieces of the cupcakes and different owners were correcting different dogs," King said.

Kauffeld, who adopted mom Shilo, also came to the reunion, King said. Shilo did not interact with the puppies much because she was intimidated by the larger-sized puppies, but did seek out pets and treats from the humans, Kauffeld said.

The reunion was so successful that all the families are planning for the next reunion which would be held around the time of the puppies' birthday around May 25, King said.

In the meantime the owners try to get together for playdates, King said. Oreszko won't have the opportunity to come down often, but wants to make it at least once every six months, King said. 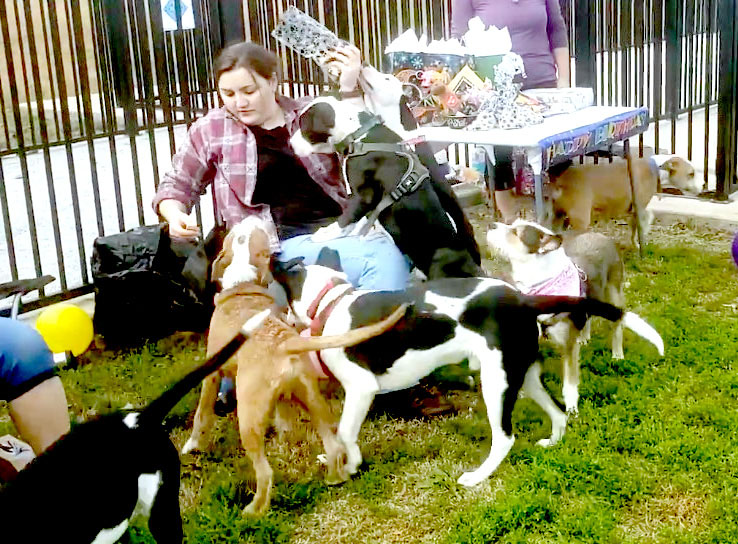 Photo submitted Percy's owner Maddie King is bombarded by puppies wanting treats at the canine reunion on Nov. 20. The reunion brought together most of a litter of puppies that were adopted out to different families. 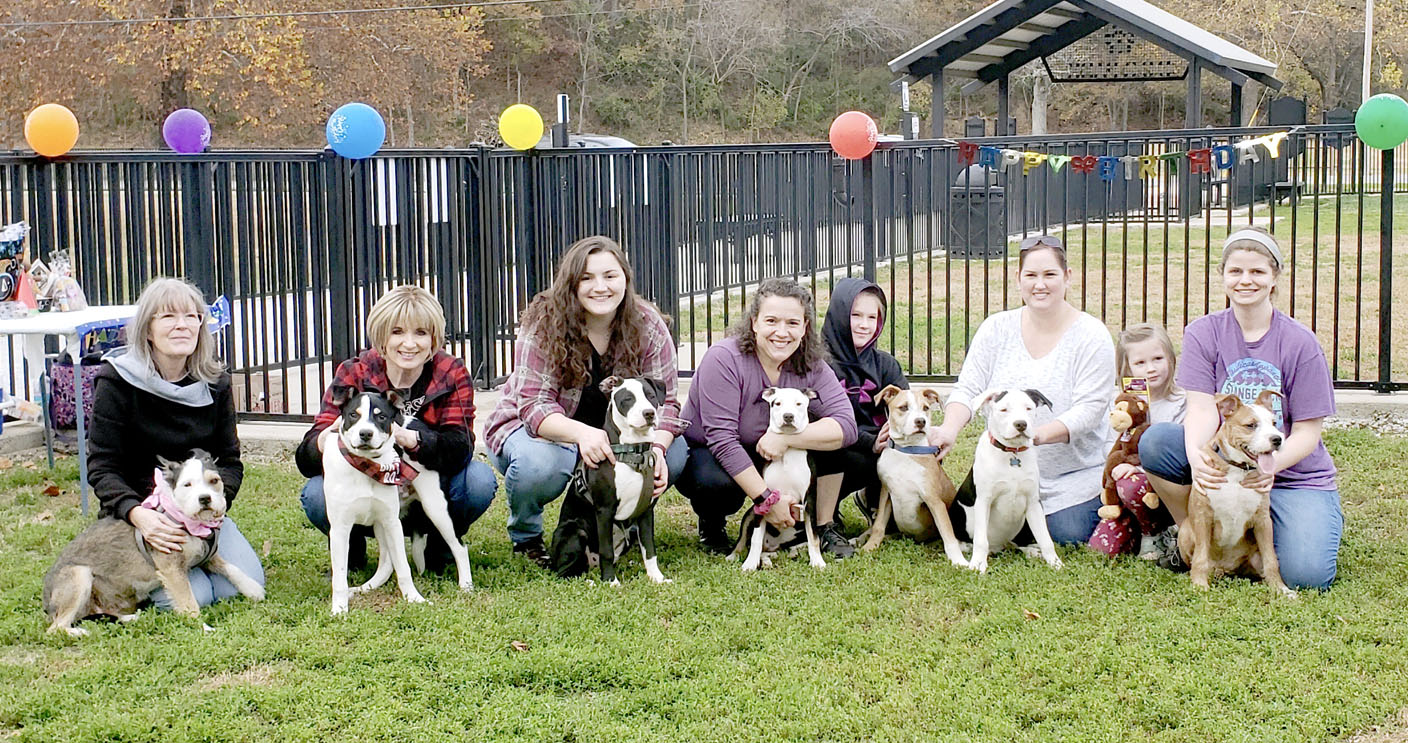 Photo submitted. Shawn Kauffeld with mamma Shilo (left) poses with Mary Schleuter and Newton; Maddie King and Percy; Jennifer King and Curie; Skyler Hazen; Rhonda Hazen and Cody and Carson; Alyssa Hazen and Amanda Oreszko and Theo at the canine reunion on Nov. 20. This was the puppies' half-birthday celebration. Another celebration is being planned for the time around their birthday in May, Jennifer King said.