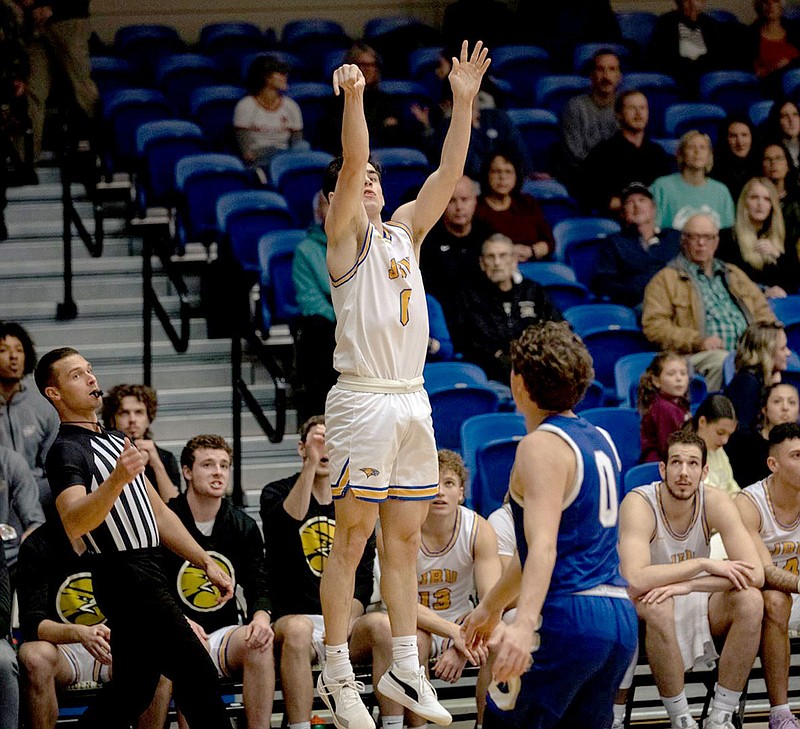 OKLAHOMA CITY -- Senior Luke Harper and junior DJ Ellis each hit triples in overtime, and the John Brown defense forced Mid-America Christian (Okla.) to shoot 1 of 6 in overtime and commit four turnovers as the Golden Eagles held on for a gritty 87-83 win over the Evangels in overtime Saturday afternoon inside Gaulke Activity Center.

Harper hit a pair at the line to put the Golden Eagles (11-6, 5-4 Sooner Athletic Conference) up five, 77-72, with just 27 seconds left in the contest, but as fate would have it MACU's Kendall Scott would pull the hosts within three on a layup, then while employing a full-court press, John Brown coughed up the ball trapped in the back court. MACU scooped up the loose ball as Terrance Jones completed the layup, absorbed the foul and converted the three -point play to force overtime.

After Harper and Ellis opened overtime with consecutive triples to blunt some of the Evangel momentum, MACU went to work over the next minute and used a layup and four makes at the stripe to tie the game at 83 apiece.

Ellis' layup gave JBU a two-point lead, and the Golden Eagles went to work on defense. Mid-America Christian would finish the game on five straight empty possessions while Ellis iced the contest at the line with seven seconds left in the game.

"What an effort today by our guys," said head coach Jason Beschta, after JBU improved to 2-0 in overtime this season. "I am so proud of the way we fought to get a win against an always really tough Evangel team. This has been quite a week, and to see the way our guys continue to come together and lean on each other and push each other and lift each other up was inspiring."

After a disastrous offensive start that saw the Golden Eagles shoot 1 of 10 to open the contest, John Brown rebounded in the final eight minutes of the first half. Facing an 18-6 deficit, junior Payton Guiot hit three triples and sophomore Noah Taylor added a pair to fuel a 27-7 Golden Eagle run to finish the first half. What was once a 12-point hole was converted into an 11-point advantage for the visitors.

"After we got down early in the first half it was great to see our guys fight back and take the lead rather than quit." Beschta said. "Then as we continue to deal with foul trouble we had to play some interesting lineups and guys just continued to step up and make a big plays.

"James (Beckom) and Ira (Perrier) were incredible on the boards, DJ and Payton hitting shots, Luke making some really big plays for us and having probably his best night of assists. I'm so happy for our guys to get to experience this one and hope we can use it going forward to propel us to believing and achieving even more."

A 9-2 MACU surge in the middle of the second half pulled the hosts within two, 42-40. The Evangels scored 24 of the game's final 39 points down the stretch in the second half to tie the game just before the buzzer.

Guiot had himself an afternoon, scoring a game-high 23 points on five triples. He also added a pair of clutch acrobatic layups late in the second half to maintain the narrow John Brown lead. Ellis came up with 20 points -- a career-high -- on four triples and a perfect 4-of-4 effort from the line.

Harper dished out a career-high eight assists and ended the afternoon with 18 points – hitting 7-of-9 from the charity stripe, while junior James Beckom contributed a season-high 16 points off the bench and added 11 rebounds, four on the offensive glass, for his first-career double-double.

Senior Ira Perrier tied a career best mark with 14 rebounds to lead all players as JBU edged out MACU 47-46 on the glass.

Kendall Scott led the MACU effort with a double-double, scoring 19 and securing 14 rebounds. Terrance Jones and Isaiah Hammons came off the bench to contribute 15 and 12 points, respectively, in the loss for Mid-America Christian.

The JBU women are scheduled to return to action at 6:05 p.m. Thursday against Science & Arts.