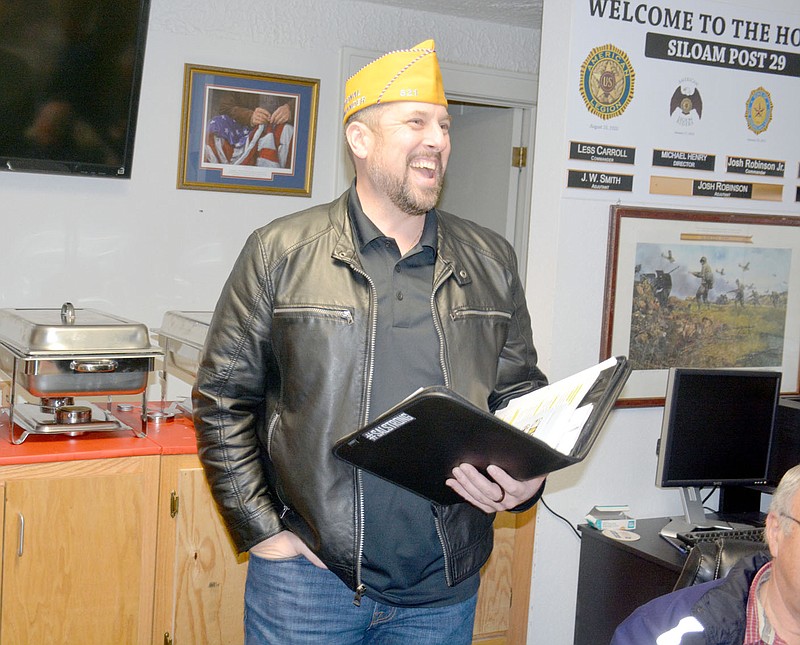 The national commander of the Sons of the American Legion (SAL) visited the Siloam Springs detachment of the SAL on Friday and Saturday to meet some of the members and promote an updated program.

Commander Michael C. Fox's mission was to visit smaller detachments to ensure they have what they needed and to promote his program, Flying Flags for Heroes, which would have people place 1 million flags on the graves of veterans in a one-year time period, he said.

"I feel it's important to reach out to everybody because even these smaller detachments are doing the work," Fox said.

Fox visited the Killed in Action Memorial and Oak Hill Cemetery on Friday to visit the grave of Paul Chmielewski and Saturday he spoke to the SAL during the monthly breakfast organized by the SAL and the Legion Riders.

On Friday, Fox visited Gentry's American Legion Post 159, plus the Gentry Veteran's Memorial and visited the graves of Franklin Hardcastle and Dan Londagin, namesakes of the Gentry post. After the visit, Fox went to Siloam Springs.

In the city, Fox went to the Killed in Action Memorial at Memorial Park and then went on to Oak Hill Cemetery to pay tribute to Chmielewski, a prominent member of American Legion Post 29 in Siloam Springs.

The following morning, Fox spoke at the breakfast put on by the SAL and Legion Riders. He discussed Flying Flags for Heroes and the importance of placing 1 million flags on the graves veterans.

By placing flags on the graves of veterans, it helps to bring the community back to being involved with its local American Legion post and sends a message to Congress that action is needed, Fox said.

"I challenged every member to place two flags, one for a veteran that you know and one veteran that you wish to honor," Fox said. "Whether you know that veteran or not we're all here because of that sacrifice that they did for us."

Fox encouraged the SAL members to pick a day and to put an event together. He also said that 400,000 veterans are buried at local cemeteries annually.

After the breakfast, Fox headed on to the American Legion posts in Bentonville, Fayetteville and Rogers.

The visit to Siloam Springs was considered a success, according to SAL State Commander Bob Wade.

"It was an awesome visit," Wade said. "We had a lot of fun, he got to meet a lot of, not just the sons but people of the Legion, Auxiliary and Riders."

Joshua Robinson Jr, the SAL commander for Squadron 29 in Siloam Springs, did not immediately respond to requests for a comment.

For more information on participating in Flying Flags for Heroes, please visit flyingflagsforheroes.com.