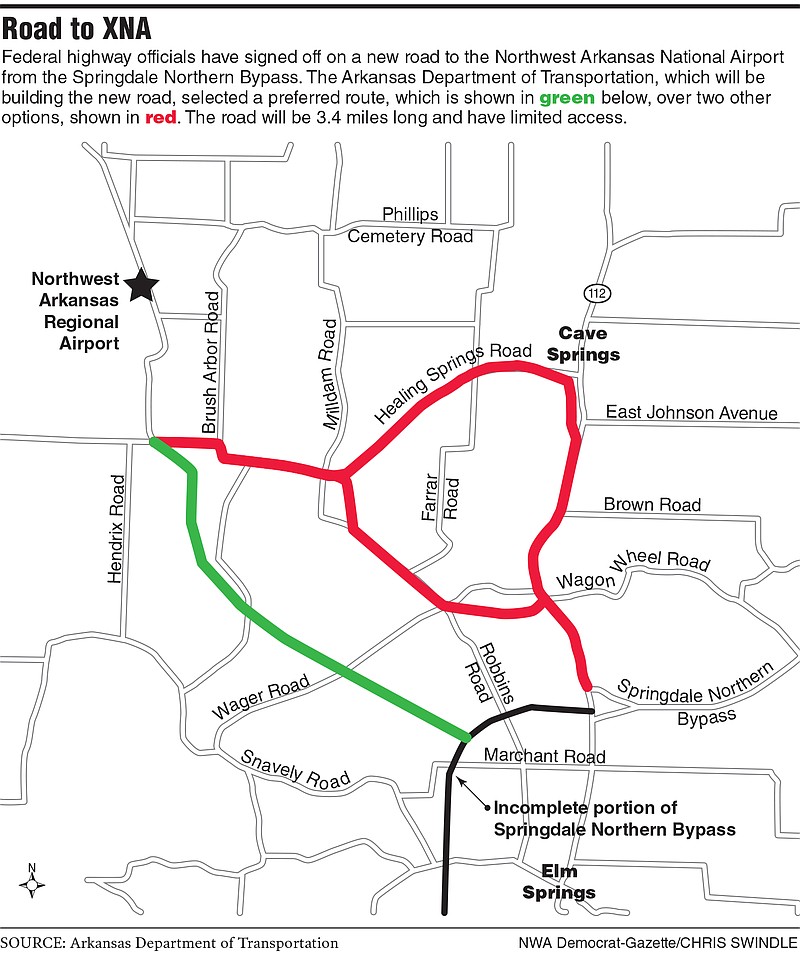 They'd been waiting at least a decade for the go-ahead from the Federal Highway Administration, which had to complete its environmental assessments of the project area and issue a final finding of no significant impact, also known as a FONSI, before the project could go forward.

"This road has been a long time coming and having the approval of the FONSI is something that we are excited about for the future of travel to the airport," said Alex English, a spokeswoman for the airport authority.

Focus now turns to the Arkansas Transportation Department, which has agreed to build the road for the airport authority. The road has been identified as a priority project by the department.

Lorie Tudor, director of the Arkansas Department of Transportation, called the federal finding a major milestone.

"We can now move forward with implementing the final phases of project development so that construction can begin," she said.

The Transportation Department can begin acquiring right of way and moving utilities, according to airport officials.

"The 100% design is still in process; that's going to be done here in the next few months," said Aaron Burkes, CEO at Northwest Arkansas National Airport. "So, its realistic construction could start as early as next year."

The department is expected to design, build and pay for most of the project as part of the highway improvement program approved by voters in November 2020, the Connecting Arkansas Program II. The airport also has about $14 million in federal money that was earmarked earlier for the road.

"This is a major hurdle for making the XNA connector road a reality," said Philip Taldo, XNA board member and Arkansas highway commissioner. "It is an excellent example of what is possible when government entities partner on a major project that is beneficial to the public. In this case, ARDOT and XNA worked hand in hand to move this project forward."

The route preferred is a fairly straight shot from a new interchange on the Springdale Northern Bypass, just west of the Arkansas 112 interchange, to the entrance of the airport. It follows the Osage Creek valley for much of the way.

Plans call for the road to be 3.4 miles long with a 70 mph speed limit and have no entrance or exit ramps between the beginning and end. Initial construction will be a four-lane, divided highway except for the final 0.9 mile north of Holmes Road, near the airport, which will be two lanes.

Ultimately, the route is expected to be four lanes going over Arkansas 264 connecting to a new airport entrance east of the existing entrance. Right of way will be acquired for a new diamond interchange and realigned entrance to Arkansas 264 in the future as traffic warrants.

Almost 242 acres of right of way will be required.

The route will impact 3.3 acres of wetland and 6,509 linear feet of streams where bridges will cross. The route will go through 15.6 acres of 100-year flood plain, according to Transportation Department officials. The route is close to two karst springs, which are suitable habitat for endangered Ozark cave fish, and 75.5 acres of suitable bat habitat, including 11 suitable roosting structures.

The Arkansas Department of Transportation wants a four-lane, limited-access road to the airport because it provides the most direct and reliable route. The proposed road reduces the likelihood of congestion, accidents or extreme weather events interfering with people getting to and from the airport, according to the state department.

Current routes to the airport from the south and east, like Arkansas 264 and Arkansas 112 are winding, two-lane rural roads for the most part. Arkansas 264 was closed by flooding during heavy rains earlier this year. Current routes also run through downtown Cave Springs, which slows traffic.

Airport officials have wanted a new road to the airport since before it opened in November 1998.

The alternate routes came into play because the Federal Highway Administration, federal wildlife officials and the state Transportation Department, which all have to sign off on the road, require all reasonable alternatives to be explored before a project is considered.