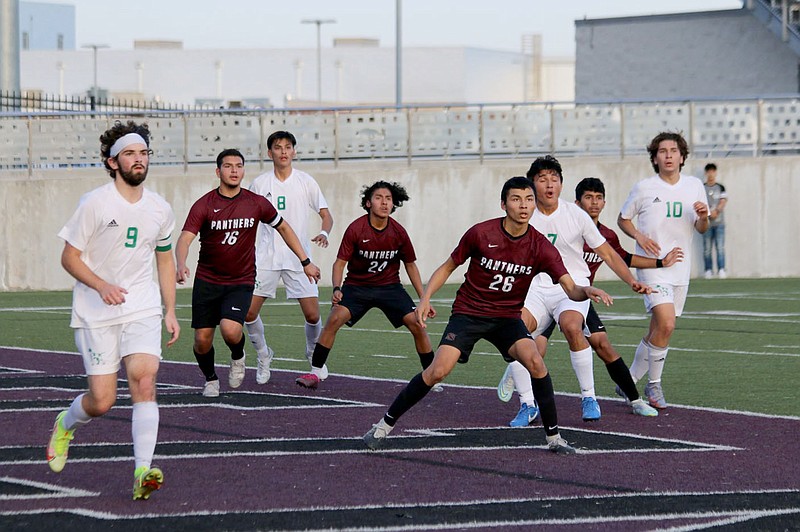 Mark Ross/Special to Siloam Sunday Siloam Springs and Van Buren players await a cornerkick in the two teams' match on April 5 at Panther Stadium, which Van Buren won 1-0. Siloam Springs defeated the Pointers 2-1 on Tuesday, May 3, at Blakemore Field in Van Buren.

"It was a great way to bounce back after dropping points at Russellville," said Siloam Springs coach Luke Shoemaker. "Van Buren is a talented team that will compete for another state title next week, so to come on the road and win with a few key players hurt, that was admirable. I was proud of our effort and tenacity."

Siloam Springs was coming off a 4-1 loss at Russellville on Friday.

The Panthers, who lost to Van Buren 1-0 on a late goal on April 5, gave up an early penalty kick in the second half in Tuesday's game.

Siloam Springs used a pair of set pieces to get back in the match.

Edwin Batres connected with Ronald Mancia on a corner kick for a goal. Batres then had a free kick find Tate Broquard for a second goal and what would be the eventual game-winner.

"We gave up a PK early in the second half but continued to battle back," Shoemaker said. "Both goals weren't pretty but they were gritty and sometimes that's all you need."

The Panthers scored a pair of late goals in the final 10 minutes to finish regular season play with a win at Vilonia on Wednesday.

Erik Gomez scored unassisted in the 72nd minute to give the Panthers a 1-0 lead.

Edwin Batres assisted on Ivan Sandoval's goal in the 74th minute for a 2-0 lead.

The Panthers will now head to El Dorado this week for the Class 5A State Tournament, which begins with the opening round on Thursday. Complete tournament brackets were not available at presstime.