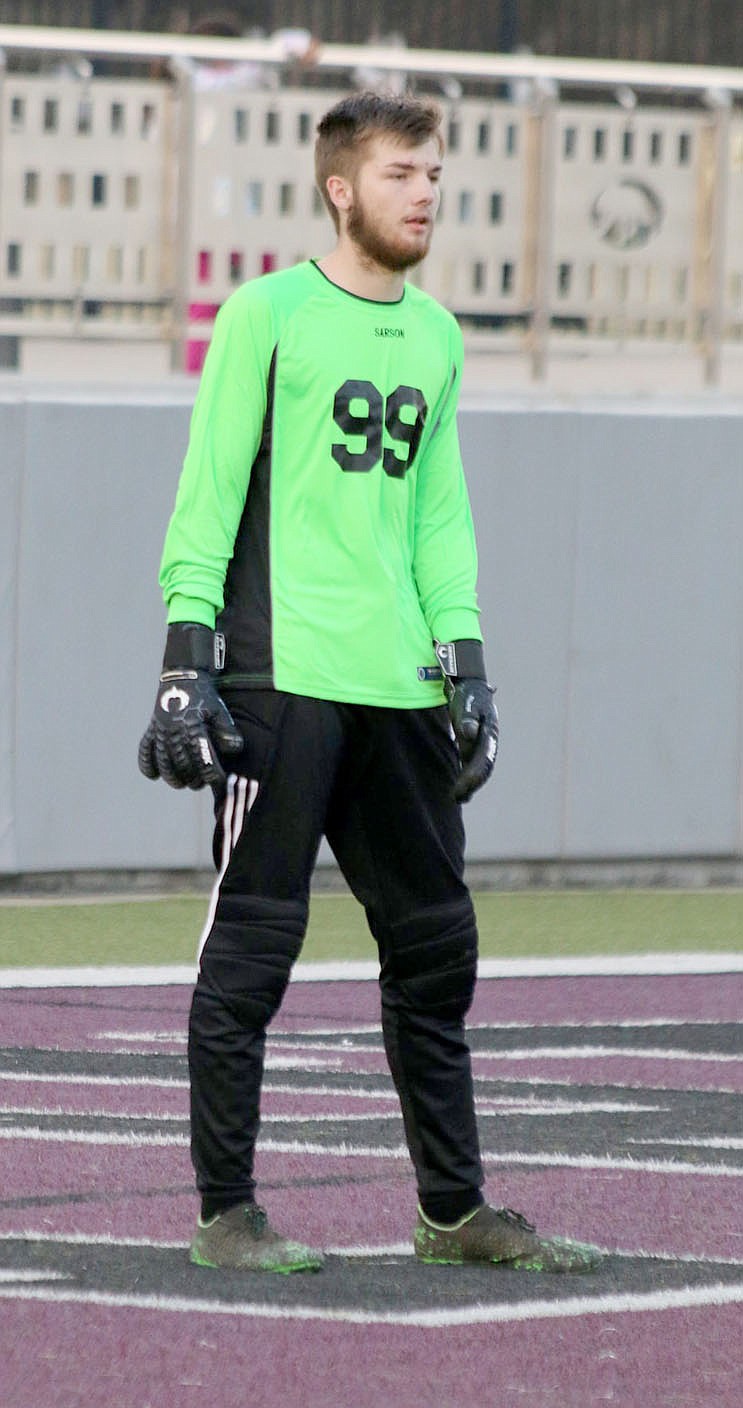 Mark Ross/Special to Siloam Sunday Senior Jedi Hunter has been a two-year starter in goal for the Siloam Springs boys soccer team. Hunter and the Panthers head to El Dorado this week for the Class 5A State Soccer Tournament.

Sports athletes are often notorious for fun nicknames, but Siloam Springs senior Jedi Hunter has been a big hit with Star Wars fans.

"In my senior letter to him, I specifically brought up when I first saw that we were going to have a kid named Jedi Hunter, the Star Wars fan in me couldn't have been more giddy," said Siloam Springs boys soccer coach Luke Shoemaker.

But those who know him call him Jedi, and there's a story behind it.

"My mom (Rebecca Hunter) always wanted to call me Jedidiah," Hunter said. "She found it in the Bible. She always thought that was going to be my name. But then when I started growing up, people started calling me 'Jed,' and my parents did not like it. They would not do Jed."

Hunter said it was his babysitter who originally started calling him Jedi, which are the light-saber wielding, galactic peacekeepers of the Star Wars universe.

"My parents caught on to it and they thought it was awesome," he said. "So ever since, they would not do Jed, but they would do Jedi, and I thought that was pretty cool.

"My mom's a (Star Wars) fan. She loves the first trilogy," he said. "My dad (Joey Hunter) not so much. It was mostly my mom that stuck on to it."

Hunter's nickname has been brought up every where the Siloam Springs boys soccer and boys basketball teams have played this year.

"Every where we go, is Jedi this kid's real name?" Shoemaker said.

Hunter has fun with it.

"He enjoys it," Shoemaker said. "On senior night, one of his comments about his future plans was he was going to fine craft his Jedi skills in graphic design in college."

Hunter was a key contributor in post on the Panthers basketball team that went 20-7 overall and reached the Class 5A State Basketball Tournament. His 6-foot-5 lengthy frame helped the team around the basket and in rebounding.

On Thursday, he and his soccer teammates will take the field in El Dorado for the Class 5A State Soccer Tournament.

Hunter will make his 29th career start in goal for the Panthers, who also have enjoyed his length in defending their net.

"You can't coach the physical tools that he brings to the table," Shoemaker said. "When you have a kid that can stand flat footed and put his wrist over the crossbar, that is a weapon."

Hunter had helped the Panthers record 17 career clean sheets in 28 starts over the last two seasons.

"He's got the technique," Shoemaker said. "He understands positioning. He's vocal. He was born to be a goalkeeper."

Shoemaker also said Hunter has done a good job of being a senior leader.

"At times he's soft spoken and quiet, but other times he can be very direct," Shoemaker said. "He can push his teammates. You have some senior leaders that are great at helping people organize guys within drills because they know where guys should be. He has so much soccer awareness that as we move around to different stations, he's able to tell guys, 'No, you're supposed to be there. You're supposed to be here. Here's how you do it.' And he's not a field player. He's seen it. He knows the game and he has a lot of his dad in him. He has a lot of Joey in him."

Of course, Hunter always had to wait to join the team after basketball season ended. This season, he made his first start in the Panthers' first conference game at Mountain Home on March 10.

Basketball season ended on March 3 against Sylvan Hills in Sheridan, and a week later, Hunter was in goal for Siloam Springs.

Over the next 14 games he helped the Panthers go 10-2-2 and finish second in the rugged 5A-West Conference.

"It's gone by quick," Hunter said. "Senior year has gone by a lot faster than usual. It hasn't really hit me yet that this season is ending. I still feel like we have more to go. There's still more to go and more to play."