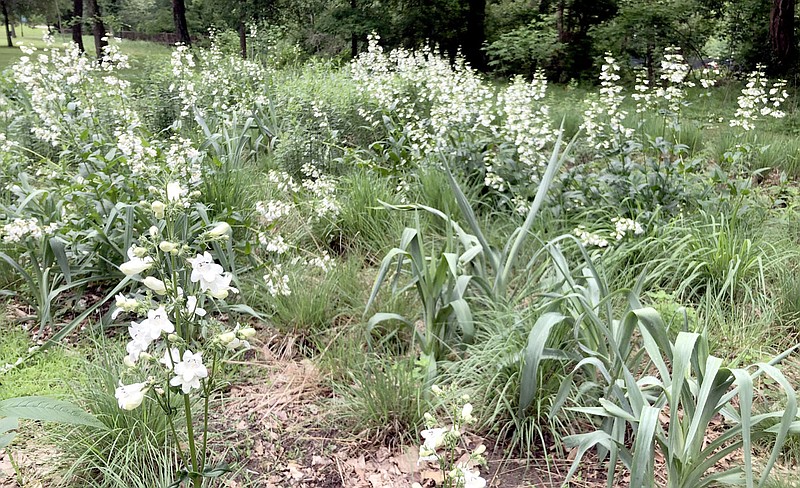 Photo submitted Travis Chaney shares a photo of his garden which will be featured on the Mothering Matters Garden Tour. With most of the plants he raised last year eaten by deer and groundhogs, Chaney experimented with growing individual Perennial plants to create a deer-resistant garden, according Mothering Matters Coordinator Rebekah Entwistle.

Mothering Matters, a group of mothers of young children, will host its first spring garden tour from 10 a.m. to 1 p.m. on Saturday, May 14.

People purchase tickets and receive a map of all of the homes participating in the garden tour, Entwistle said. Tickets may be purchased at Beautiful Lives Boutique; Cafe on Broadway; Occasions; Sassafras Antiques; Savvy Salon and Whisk and Spool Bakery, Entwistle said.

Entwistle emailed brief descriptions of each garden on the tour.

In February 2021, the Kretzer's 19-year-old Holly Bushes that formed a three inch tall hedge across their entire front yard were mostly killed due to the polar vortex, Entwistle said.

Following the death of their bushes, the couple decided to pull out the hedge and replace them with 23 Wintergreen Boxwoods with the plan to hedge the Boxwoods as they grow in the coming years, Entwistle said.

When not working to restore wetlands, Chaney can be found puttering around his naturalistic garden, Entwistle said.

Chaney's ranch house was built in 1954, but his meadow gardens are only two-years-old and were established from approximately 2,000 individual landscape plugs, Entwistle said.

Deer and ground hogs have sadly eaten 75 percent of his flowering Perennials the first year so Chaney had to rethink his garden plan, Entwistle said.

This year, Chaney decided to experiment with growing individual Perennial plants from seed as well as working to create a dramatic. and dynamic deer-resistant garden with four seasons of interest, Entwistle said.

Chaney said he is thrilled that Mothering Matters is hosting the garden tour.

"I'm convinced that a thriving garden culture is a reliable indicator of a healthy, stable community," Chaney said. "Gardeners are people who have put down roots. They plan to stick around, they know how to work, and they are faithful to their place."

Rise 7's Jed Harris and his wife Rachel own a 1984 Ranch Farmhouse which is surrounded by shady woods, Entwistle said. The couple loves to spend time walking their backyard trails that wind through the woods admiring their favorite plants: Hostas.

Harris and his wife also enjoy watching their daughter play in their unique playhouse that he built himself, Entwistle said. The playhouse is covered in cedar shakes and is popular among the Harris' daughter's friends who refer to it as the "Gnome House," Entwistle said.

Visitors who make their way to the Browns' 1986 garden cottage will see little woodland figures in the garden including Stephania's favorite, a rooster named Tom, Entwistle said.

The Andrus' green two-story house is situated on the top of a hill. Visitors cruise up the long winding gravel driveway to the house, said Andrus. Parking is available in the side yard and easy to see, Andrus said.

With a "cottagey" and wild "Farmhouse style," the couple focuses on a lot of shade-loving flowers like Impatiens, Begonias and Hostas, as well as herbs and also plants that deer do not like, Andrus said.

"We are thankful for a sunny spot for our vegetable garden," Andrus said. "We don't really consider ourselves great gardeners, but we have fun with it."

Andrus and her husband Dave have hosted lots of events on their property from big Easter egg hunts to the activities of many college students, Andrus said. During the coronavirus pandemic, the Andrus' hosted plenty of spaced-out get-togethers outside the fire pit, Andrus said.

Andrus said there will also be homemade baked goods for sale during the garden tour which can be purchased from Mothering Matters moms, Andrus said.

When Benton County Judge Stephen Thomas retired at the end of 2020, he did not lack activities to keep him busy. Thomas has been raising Peonies with his best friend from college, Henry Chotkowski, who resides in Fayetteville, Entwistle said.

Thomas credits Chotkowski for introducing and teaching him about raising Peonies, Entwistle said. Thomas has approximately 2,000-3,000 Peony plants on his acreage south of town, Entwistle said.

Thomas told Entwistle he was glad to open his peony acreage to the public to benefit moms through Mothering Matters.