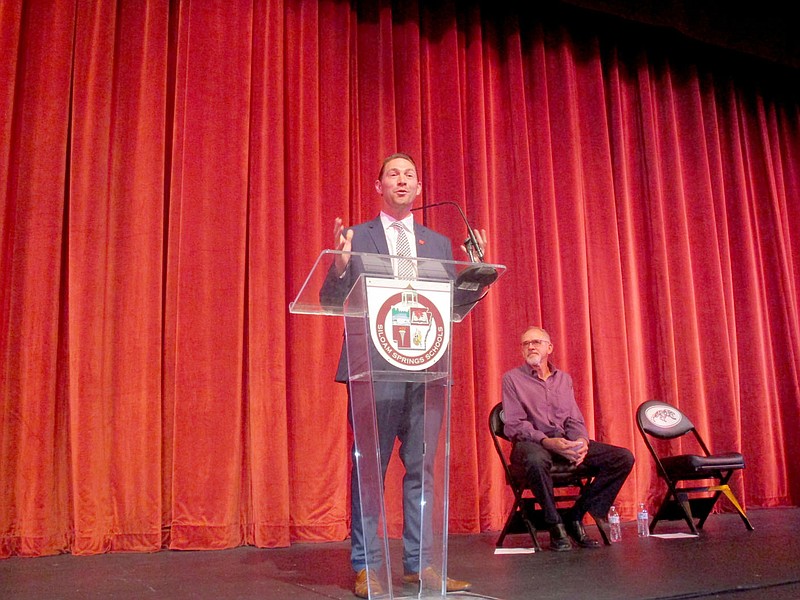 Marc Hayot/Siloam Sunday State Senate District 35 Candidate Tyler Dees addressed a question about what his top issues would be if he were elected. Dees said it would be making Arkansas the most pro-life state in the nation and fighting the high inflation the state and nation are currently facing.

State senate and school board candidates addressed voters at the Chamber of Commerce's Candidate Forum on Tuesday at Siloam Springs High School.

Candidates for State Senate District 35 and Siloam Springs School Board Zones 2 and 4 each answered four questions at the forum. Two of the questions were submitted to Chamber President and CEO Arthur Hulbert before the forum and two were submitted by members of the audience.

The primary and school board elections will be held May 24 and the primary runoff will be June 14, according to the Benton County Election Board's website.

Hulbert moderated the event, while Chamber intern Ashley Nikkel served as time keeper. The event was sponsored by Cox Business and Mary Kay--Caroline Geer. The forum had 100 live attendees and 659 people watching on Facebook Live with an engagement of 572, Hulbert said.

The forum started with the Pledge of Allegiance led by State Representative Robin Lundstrum (R-87), who also spoke briefly about how voters can access their ballots on voterview.org and that she was still Siloam Springs Representative until Jan. 1, 2023. Lundstrum encouraged attendees to contact her if they had any issues for 2022.

State Representative Delia Haak (R-91), who is running for new House District 17, spoke briefly. As the only candidate for the district, Haak was given three minutes to speak.

Haak said she was a Constitutional conservative and believed wholeheartedly in the principles of the Republican Party. She also said she is rerunning because she wants to give back to her community.

"I wanted to run again because I treasure where I live and I take very seriously a huge responsibility and impact that we as legislatures have on their lives," Haak said.

Two of the questions were submitted prior to the forum and two were submitted by members of the audience. In the interest of space, only the first candidate to speak for each question had their answer listed.

Question 1: If you were elected what would be your top two issues that you would focus on in Little Rock?

Dees said he was unapologetically pro-life. Dees went on to say that he wants Arkansas to be the most pro-life state in the nation in banning abortions, except for the life of the mother.

The second issue Dees would focus on would be inflation and taxation, he said.

"People are worried about can they fill up their tank of gas," Dees said. "They're having to make decisions 'Do I fill up my tank of gas to get to work or do I buy milk or groceries when I get home?' That's unacceptable."

Dees also said he believes that people know how to spend their money better than anyone in Little Rock. Dees concluded by saying people do not need more dependency on government but more dependency on taking care of their families.

Question 2: It seems many factors are dividing our state. For example, issues or presumed issues of race, Critical Race Theory in our schools and personal rights. Where does your platform stand on this?

After the meeting Hendren McKenzie told the bill's sponsor that they needed a clean bill and that she would work with the sponsor on a new bill, she said. The sponsor came back at the very end of the session of the education committee with the new bill, Hendren-McKenzie said.

"It was a simple clean bill," Hendren-McKenzie said. "It had four tenants in it ... but basically we're not going to sit down a child and say 'I'm going to look at your skin color and I'm going to decide you're the cause of something.'"

Question 3: If elected how do you intend to communicate with individuals in our district? What is your plan for answering comments and concerns in a timely manner?

Peterson said he was exceptionally open and an accessible person and was active on Facebook and Twitter. Peterson also said he has a petersonforarkansas.com webpage that lists his email address and telephone number. He also said many people in Prairie Grove know how to find him.

As a retired government employee, Peterson said he had time to read emails and respond.

"I'm happy to start responding immediately to messages, text messages email, and talk to you about anything you'd be concerned about," Peterson said.

Question 4: Could you discuss your thoughts and feelings about the divided nature of politics at the state and national level?

Tennant said he spoke to someone who said the two biggest problems were Republicans and Democrats. Tennant didn't say what he said to the person he was speaking with but said as a Reagan Republican and someone who holds true to conservative ideas and is pro-Jesus he was ready to get to work.

"I would look forward going to Little Rock and trying to coalesce and try to mend some relationships that are going on down," Tennant said. "There does seem to be an animus and a divisiveness not only in Little Rock but also on a state level. I think what we've got to do is come together as Arkansans and work together."

Then the candidates were given two minutes for closing remarks in reverse alphabetical order. After the Senate candidates spoke the school board candidates came up to the stage to speak.

Each candidate had two minutes to introduce themselves in alphabetical order. Then came two questions that were submitted before the forum and two were submitted by members of the audience.

As with the Senate candidates, the answer of the first candidate to speak for each question was listed.

Question 1: One of the most important responsibilities of the Siloam Springs school board is competency in the area of financial stability and a vision to carry it into the future through capital outlay, budgetary decisions, and long-term planning? What in your background qualifies you to handle the millions of dollars involved in these processes and what would be your priorities in allocating the estimated $1 billion in surplus state funds?

Lamb began by saying financial stability is important. Lamb cited his years and experience on the school board and his 30+ years in the grocery business. Lamb then said when working with budgets people have to really focus on expenditures.

"I think in order to do well you have to keep money back for a rainy day," Lamb said. He didn't say what the board would do if it got part of the $1 billion carryover, but said most likely will be handled by the state legislature.

Lamb also said the board used some of the Covid-19 relief funds for instructional helpers for kids who were behind academically and need help.

Question 2: The school board has been very active this year, bring out what appears to be more participation. by citizens. Why do you think that is and if selected what positive steps would you take to keep transparency on the forefront?

Stephens said she thought that people were getting involved because of the pandemic. This brought parents to the forefront which they needed to be involved, Stephens said. People wanted the schools open but safe, which led to confusion as to what that is, Stephens said.

If there's something parents don't understand or agree with they need to start with teachers and administrators and make it come to the school board for them to listen to at a different time, Stephens said.

Question 3: What does the district's mission statement "Change lives through educational excellence" mean to you and how will you help the district accomplish this?

Varnadoe said he thinks the district needs to raise its standards and that the status quo is not good enough.

"Siloam Springs ought to be the best school system in Northwest Arkansas where people want to move here for the schools, which they used to do," Varnadoe said.

Varnadoe said he met with a gentleman who works for the city while knocking on doors who said he moved his family to Siloam Springs because of the way the school system used to be and is now planning on moving to Oklahoma so he could put his children in Watts Public School System.

He also provided statistics from U.S. News for different schools in the Fayetteville Area Metro Schools. According to the statistics Siloam Springs ranked 13th of all the schools and had a 42 percent math proficiency, 33 percent reading proficiency and 34 percent science proficiency.

Question 4: How do you specifically plan to assist Siloam students, teachers and public school district in the face of low student engagement, low teacher retention and ongoing culture wars that attack public education?

Whorton said first trust needs to be built between the school district and parents, students and teachers. Whorton then alluded to a comment Stephens said about talking to people in person or on the telephone rather than taking to social media and said he had multiple one-on-one conversations with educators along with parents and voters.

"There has to be a level of trust there before we can address those issues and concerns," Whorton said. Those need to be done one-on-one and I have spent literally hundreds of hours putting myself out there for people.

Whorton said he had been told by many people that they are not being listened to and that he has come to this point and would love to continue this in the future. 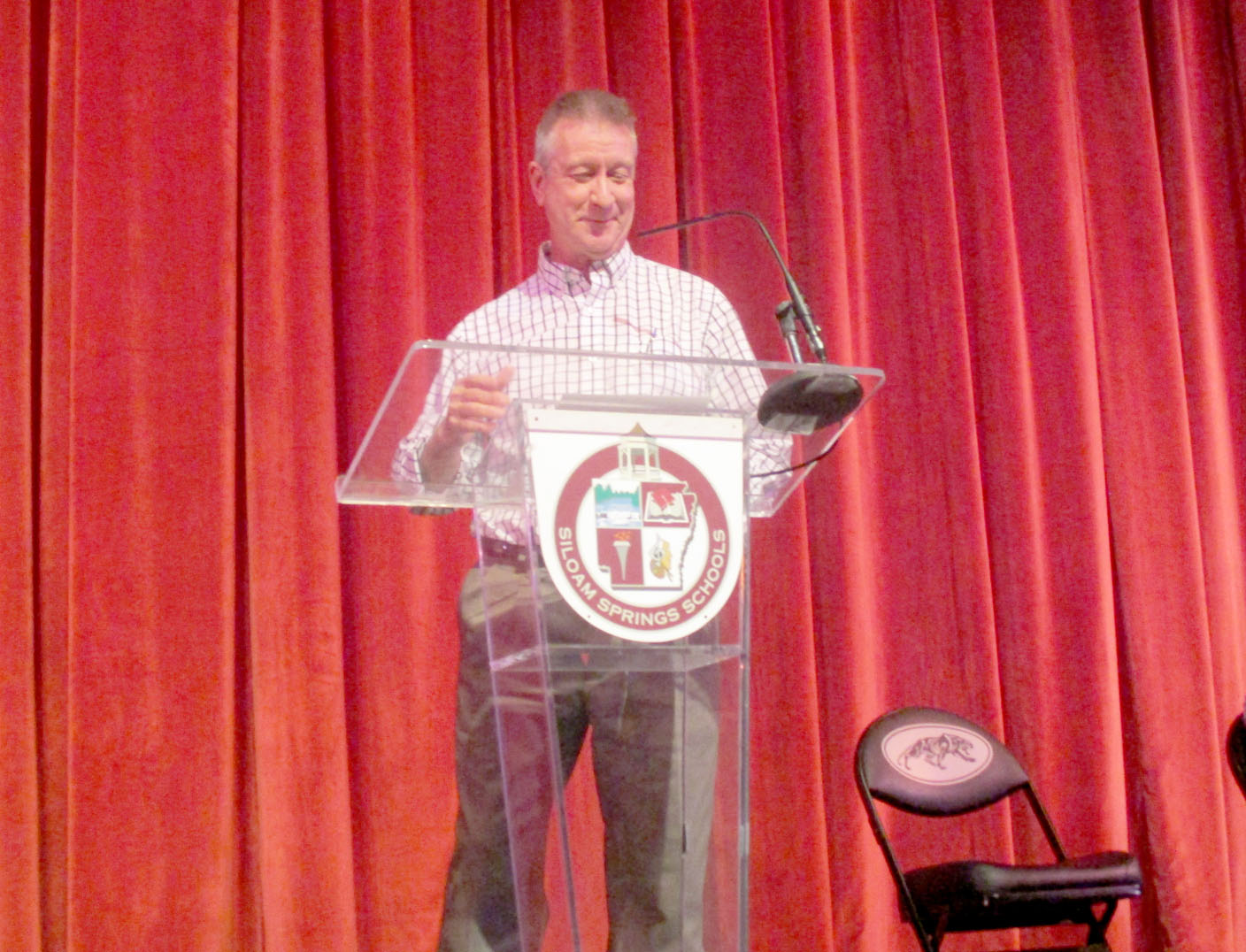 Marc Hayot/Siloam Sunday District Four School Board Candidate Brain Lamb speaks about how his experience as a member of the school board and store manager at Harps has helped prepare him for the economic issues the school board will face. 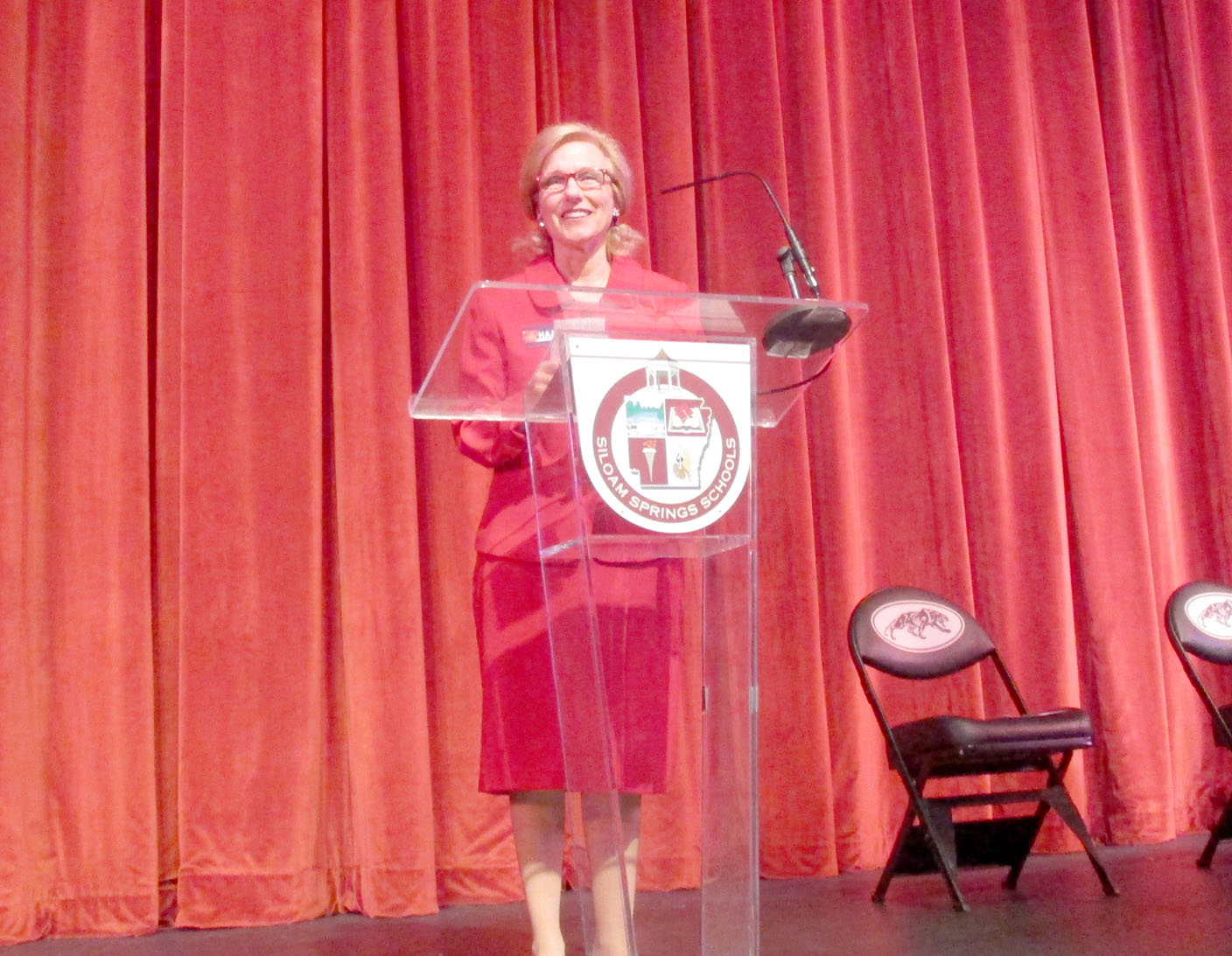 Marc Hayot/Siloam Sunday State Representative Delia Haak (R-91) spoke at the Candidate Forum on Tuesday at Siloam Springs High School. As the only candidate running for District 17, Haak spoke about the many opportunities she was afforded in Arkansas and how she wants to give back to the place where she has done so well.