Golden Eagles battle but fall in 3 sets at nationals 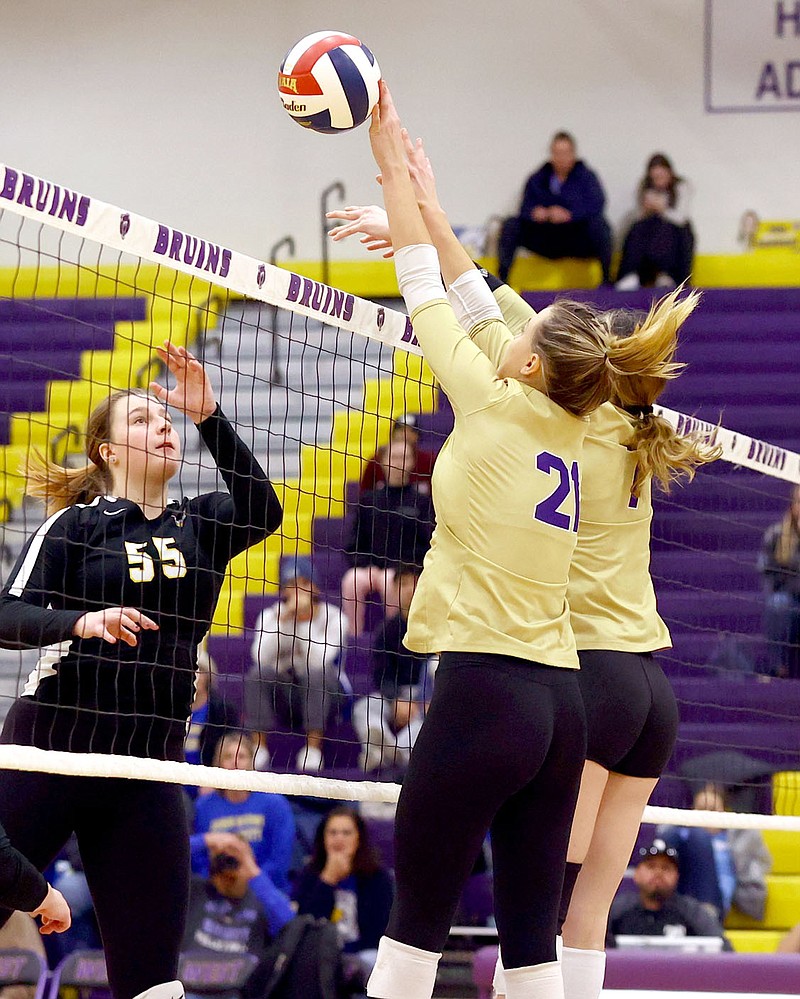 Photo courtesy of JBU Sports Information John Brown's Taylor Golmen (left) hits over the Bellevue (Neb.) block of Allie Kerns and Jacki Apel on Saturday in the Opening Round of the NAIA National Tournament in Bellevue on Saturday, Nov. 19.

BELLEVUE, Neb. -- Appearing in the NAIA National Championships for the first time in program history, the John Brown University volleyball team pushed the host Bruins to the brink -- twice -- before falling in straight sets (25-23, 26-24, 25-17) to No. 14 Bellevue (Neb.) on Saturday afternoon (Nov. 19) inside Bellevue West High School in the Opening Round.

Despite missing the services of All-SAC first teamer Savanna Riney, the Golden Eagles (22-10) used a career-high 15 terminations from freshman Madeline Nolan and a strong defensive effort that kept the nation's 12th-most efficient offense largely at bay to produce a pair of sets that could have gone either direction.

A pair of terminations from both Nolan and freshman Ella Yarborough were followed by a Jillian Blackman service aces -- JBU's lone ace of the afternoon -- to build a set-high four-point lead, 9-5. Consecutive side-outs courtesy of kills from sophomore Taylor Golmen continued the visitors' lead by two, 12-10, before the Bruins began the rally.

An 8-2 Bellevue response opened an 18-14 deficit for John Brown, but the visitors methodically whittled down the lead and eventually tied the set at 21-all after back-to-back Golmen terminations. Two rallies later, Nolan's kill produced the fourth tie in the set, but BU took a 1-0 lead by capturing three of the final four points – the last coming off a JBU attacking error.

Still showing determination and grit, despite falling down by three early, Nolan and Golmen each produced a pair of kills to ignite a 6-1 rally to take the lead by two, 6-4. Bellevue responded, however, and despite a Nolan-Yarborough rejection to tie the set at seven, the Bruins produced a retaliatory 7-2 run to take a 10-7 lead.

JBU regained its composure and largely rode the hot arm of Nolan as the visitors climbed back, drawing even at 16 and 17. After Bellevue took five of the next six, the teams traded points until BU's set point at 24-21. Again, the Golden Eagles pushed back.

Using a Bruin attack error as a rally point, John Brown tied the set at 24 after consecutive Cloud-Nolan connections that resulted in kills, marking the seventh time the set had been even. Bellevue responded with back-to-back points, edging out the visitors from drawing the match even.

The emotional toll of two narrow losses finally began to show once Bellevue used a 6-0 run to break open a 10-all tie in the third, which stood as the frame's fifth tie score early in the period. JBU still had one final push, however, even at match point. The Golden Eagles pressured BU into two attacking errors and used a Barnes-Yarborough rejection to push the final set to 17 before the hosts ended the match.

Nolan's coming out party included seven terminations in the second set alone as she finished the night hitting .184 on 38 swings. Once over .700 midway through the afternoon, Golmen ended with eight kills on 17 swings (.471) without an error. Yarborough and junior Delaney Barnes each produced four kills in the JBU setback.

Cloud also helped out on defense to the tune of 12 digs, leading three Golden Eagles in double digits. Junior Brittney Ware added 11, while senior Jillian Blackman chipped in with 10 in the back row.

Sierra Athen and Jacki Apel led the Bruins (27-7) with 10 kills apiece, with Apel pacing the strong Bruin blocking effort with five block-assists. Raeanne Kimoto dug 26 John Brown attacks as Bellevue was forced into running a two-setter offense with Olivia Galas and Sidney Sledge coming up with 22 and 21 helpers, respectively.

Despite the end of Lauren Cloud and Ellie Lampton's careers, the duo helped the Golden Eagles produce a landmark season that ended in the NAIA National Championships for the first time in the program's 49-year history.