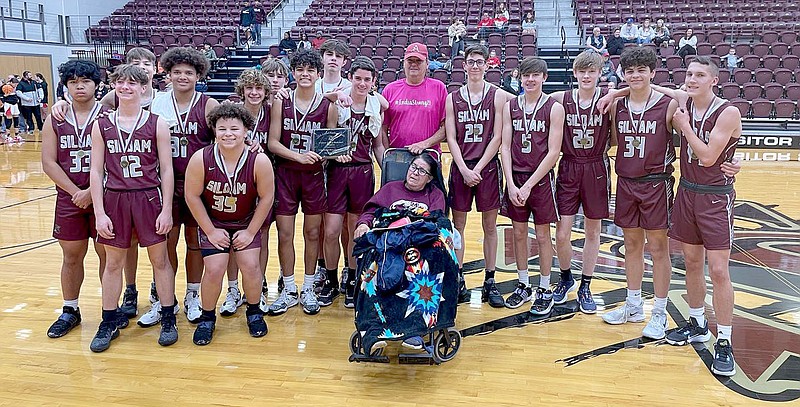 The Siloam Springs ninth grade boys went 3-0 and took first place in the India division of the India Lewis Panther Classic, finishing the annual tournament with a 41-20 victory over Stilwell, Okla., on Saturday inside Panther Activity Center.

A.J. Moore led the Panthers with 11 points, while Evan Allen had 10, Cole Pittman and Eli Mann each with five, Max Carter four and Bennett Naustvik, Jayden Hooten and Crew Webb each with two.

The game was tied at 11 after the first quarter but Siloam Springs pulled ahead 25-20 at halftime. The Panthers then took a 34-25 lead going into the fourth quarter.

Mann led the Panthers with nine points, while Allen, Moore and Stewart Schwaninger each had eight, Webb three and Pittman and Naustvik each with two.

Schwaninger led the Panthers with eight points, while Naustvik had seven, Moore and Allen each with six, Webb and Hooten each with four, Carter three and Mann, Chance Cunningham, Corbett Stephenson and Ian Muangchanh each with two.

The Siloam Springs ninth grade girls were defeated 39-17 by Stilwell, Okla., on Saturday in the first-place game of the India division of the India Lewis Panther Classic.

Stilwell led 13-3 after the first quarter and 23-3 at halftime after outscoring the Lady Panthers 10-0 in the second quarter.

Jones led the Lady Panthers with 13 points, while Kenlee Moore had five, Reagan Bishop four and O'Brien and Cenzi Johnson each with three.

The Lady Panthers led 17-4 after the first quarter, 31-6 at halftime and 38-8 going into the fourth quarter.

O'Brien led the Lady Panthers with 11 points, while Perez had nine, Seagraves and Jones each with eight and Bishop and Johnson each with two.