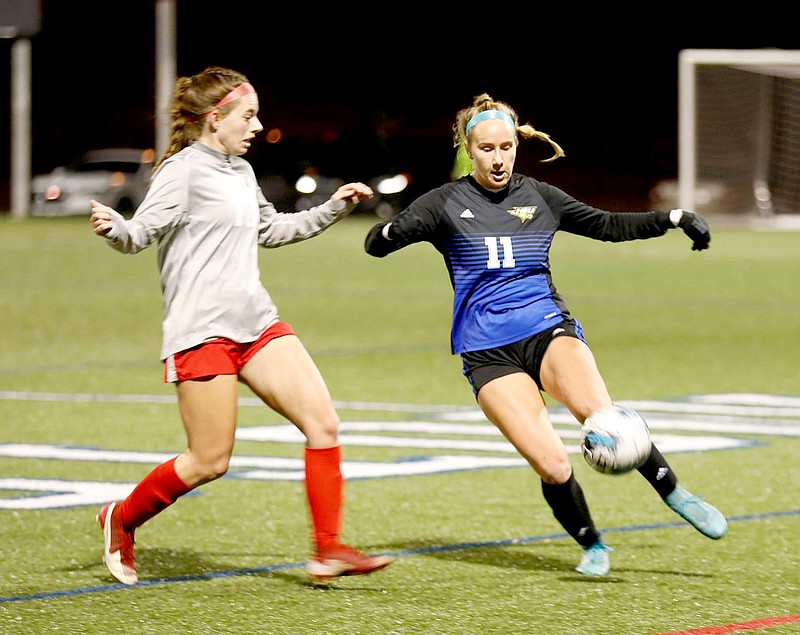 WILLIAMSBURG, Ky. -- The Golden Eagles held an 11-1 shooting advantage in the second half but too much damage had already been done as No. 14 Indiana Wesleyan used a pair of first-half goals in a 3-0 decision over the No. 21 John Brown University women's soccer team on Thursday night (Nov. 17) in the NAIA National Championships First Round at the UC Lacrosse/Soccer Complex.

Competing in the national tournament for the ninth time in program history, John Brown falls to 4-7-2 all-time at the big dance. The contest ended an eight-match winning streak for JBU, as it also concluded a three-match skid for Indiana Wesleyan.

The Wildcats pounced early, scoring two goals in a seven-minute span. Lauren Turner, by virtue of luck and good positioning, deposited her third of the season in the 22nd minute into an empty goal after Mallory Krueger's free kick from 25 yards out hit the crossbar and took a fortuitous bounce directly to Turner's leg.

In the 29th minute, Courtney Cockrum's second of the season came off a chaotic sequence in the John Brown box and, with another fortunate bounce, Cockrum cleaned up a loose ball in the goal area into the open Golden Eagle net.

Mallory Krueger netted her ninth of the season, completing a combination play that began with Abbey Drahnak's pass to Sydney Brown. Brown completed the connection to Krueger, who sailed a shot from just outside the box off the crossbar and in for a commanding 3-0 Wildcat advantage.

JBU nearly found the scoreboard in the 71st minute, but junior Lauren Walter's shot hit the crossbar, keeping the program's newest single-season scorer at bay, despite leading all players with seven shots, three on target.

The Golden Eagles ended the night outshooting IWU by a 19-9 margin. Hope Stacker completed the 10-save clean sheet for the Wildcats, while senior Chloe Griffin (15-4-0) conceded three goals on four chances.

John Brown won its fifth-ever Sooner Athletic tournament title, its third in a row, and secured at least 15 victories for the fifth time in the past seven seasons. Of the Golden Eagles' five losses in 2022, all five came to Top 25 sides.