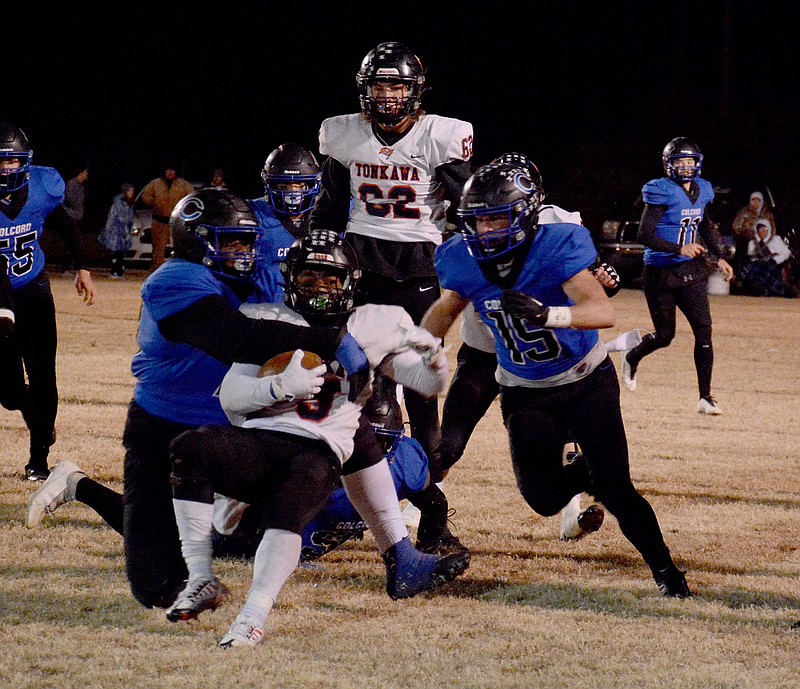 Winfield rushed for 244 yards and two touchdowns and the Hornets piled up 354 yards on the ground in a 35-14 victory over Tonkawa in the second round of the Oklahoma Class A playoffs.

Winfield also passed for a pair of touchdown passes as the Hornets improved to 12-0.

"It feels good to be 12-0," said Winfield, a junior. "We have a great (offensive) line, and that just helped me so much, being able to find holes."

Colcord, the District A-7 champion, now advances to the Class A quarterfinals where it will play District A-4 champion Ringling (12-0) at 7 p.m. Friday, Nov. 25, on a neutral field at Moore High School. The winner will advance to the Class A semifinals on Dec. 2.

"Our next goal is a state championship," said Colcord coach Austin Martin. "That's one thing we started talking about. Kids took it to heart. We've been talking to them. We've got to be different. We've got to do stuff different than we have in the past. Hey, we've done some great things in the past but we want to be different, and we don't want to make excuses, and we want to just keep moving forward and not be satisfied."

The Hornets got off to another strong start last Friday against Tonkawa (10-2).

Colcord scored on its opening possession, highlighted by a 27-yard run from Winfield on the first offensive play, followed by a 34-yard rush by sophomore Cooper Mott, which put the ball on the Tonkawa nine-yard line.

Winfield ran for six yards, and after a rush for no gain, Mott ran in from three yards out with 10 minutes, 7 seconds left for a 7-0 lead.

The two teams traded punts, but toward the end of the first quarter the Buccaneers were on the move, jolted by a 26-yard pass from Ryan Morgan to Cayden Duvall. Tonkawa moved to the Colcord 19 and looked to get closer to scoring when Cameron Jackson fumbled and Treyden Larmon recovered for Colcord.

The Hornets turned the turnover into points.

Winfield broke free for a 58-yard run into Buccaneers territory and he threw a 10-yard pass to Larmon at the 20.

After runs of four and six yards by Asaskey Pendry, Winfield threw a nine-yard touchdown pass to Winfield for a 14-0 lead with 11:52 remaining in the half.

Tonkawa answered with its only scoring drive of the first half.

Morgan found Duvall for a 55-yard pass to the Colcord nine and, on the next play, Blake Bristow ran in from nine yards out to cut the lead to 14-7.

The Hornets came right back with a scoring drive to go up 21-7 on seven running plays and one 15-yard penalty on Tonkawa. Winfield had 35 rushing yards on the drive and Mott had 13.

Winfield's 15-yard run with 6:48 left gave the Hornets a 21-7 lead, which they would carry into halftime.

Colcord stirred things up to start the second half when a Tonkawa punt attempt turned into a turnover on downs at the Buccaneers' 33-yard line.

A penalty backed the Hornets up to the 38, but Winfield found Larmon for a 24-yard gain to the 14.

Winfield ran for four and three yards down to the seven when he found Eyan Williams for a seven-yard touchdown pass and a 28-7 lead with 6:39 left in the third.

Tonkawa drove to the Colcord 24, but the drive stalled and the Hornets forced a turnover on downs with Mott getting a pass breakup on fourth down.

Colcord also drove into Tonkawa territory and turned it over on downs at the 17.

Tonkawa sliced the lead to 28-14 with a scoring drive in the fourth quarter.

Morgan threw a 17-yard touchdown pass to Bristow with 7:54 left in the fourth quarter.

The Hornets put the game away with a scoring drive -- again all rushes -- in the fourth. Winfield's two-yard touchdown run with 2:07 remaining gave the Hornets a 35-14 lead.

"What Gabe's doing as a junior is just unbelievable," Martin said. "He's a great offensive and defensive player. He's our punt returner and one of our kick returners. He's just an all-around great athlete. To be a junior, he is a special young man."

Said Winfield of the 12-0 season so far, "It's been great. What we've brought up all year is we don't want to have any regrets after this season. We just want to be great and make history, and that's what we've done so far and hopefully we can keep it up."

Both Winfield and Martin gave credit to the Hornets' offensive line for plowing the way.

"You can't find a good team without a good O-line," Martin said. "That's what we tell them all the time."

Tonkawa passed for 272 yards led by six catches for 110 yards by Duvall, but the Hornets held the Buccaneers to 52 yards on 28 carries in the rushing department.

Khaleeal Penn was disruptive with two sacks and three tackles for loss while Cade Linn had nine assisted tackles and two solo tackles.

Winfield had five assisted and five solo tackles while Mott and Larmon each had seven assisted tackles. Williams and Pendry also had sacks.

Colcord finished with 407 yards of offense.

The Hornets will now look to make their first semifinal appearance since 2010 when it takes on Ringling this Friday. The Blue Devils defeated Walters 28-22 last week.

The Hornets have enjoyed home games in the first two rounds but now will play the Blue Devils on a neutral field at Moore.

"We don't care," Martin said. "We want to have the mentality, we'll play any place any time. I'm just super thrilled about this group and how special they are and what they're doing. Their hard work is paying off." 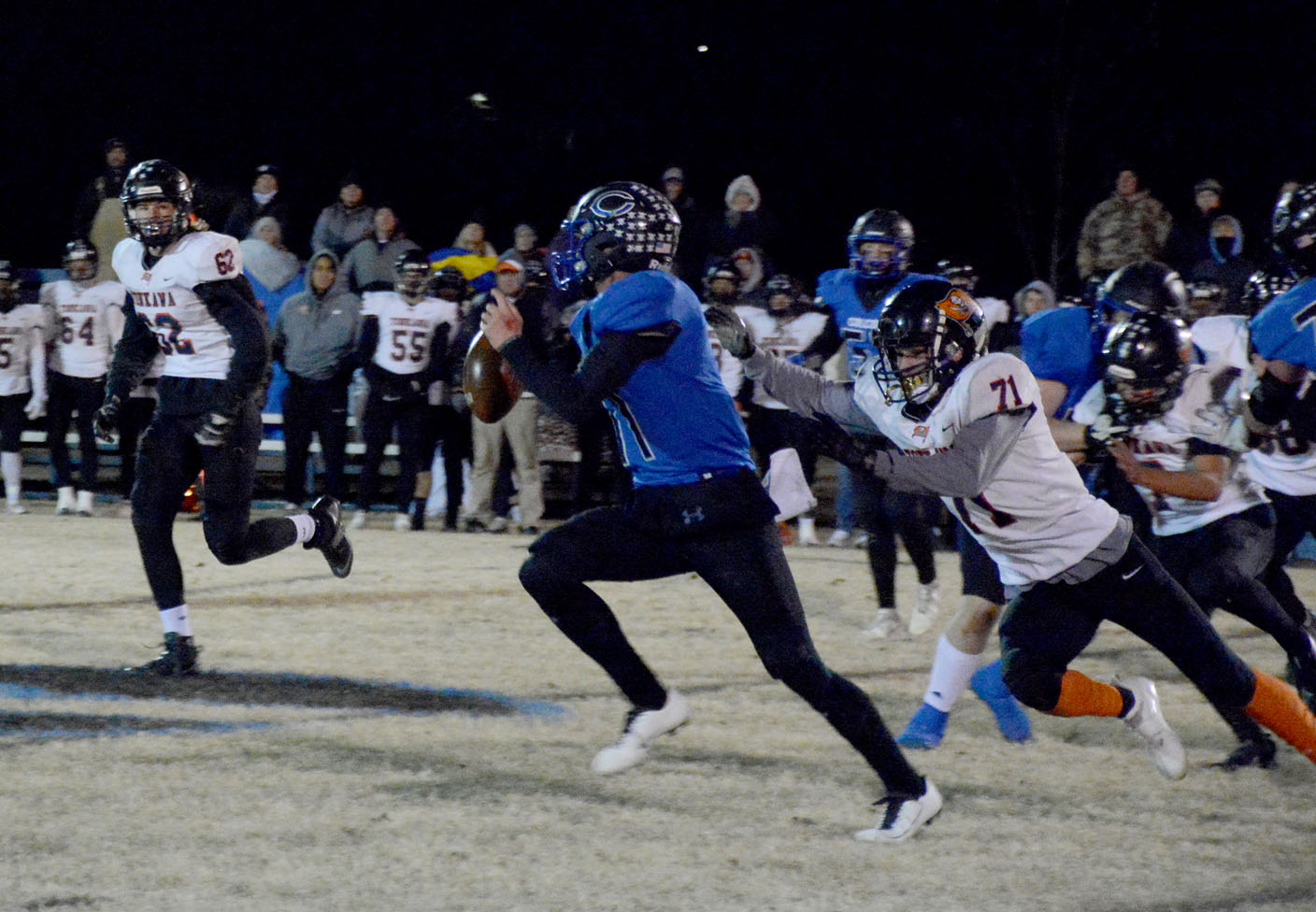 Graham Thomas/Herald-Leader Colcord (Okla.) quarterback Gabe Winfield runs for a big gain during the Hornets' 35-14 win over Tonkawa in the Oklahoma Class A playoffs on Friday, Nov. 18, in Colcord. Winfield rushed for 244 yards and two touchdowns in the victory.