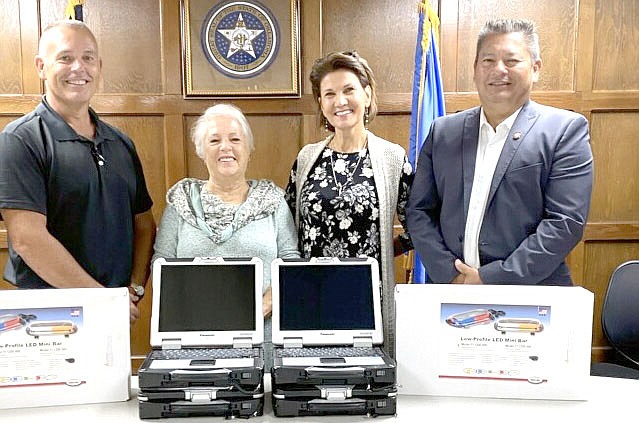 Photo submitted West Siloam Springs Director of Public Works Waylon Chandler (left), poses with Vice Mayor Linda Dixon, Mayor Rhonda Wise and Councilor Mike Shambaugh of the Cherokee Nation at a check presentation on Thursday. The Cherokee Nation donated $8,764 to the town of West Siloam Springs for computers for the water department's vehicles as well as lights and decals for code enforcement vehicles.

WEST SILOAM SPRINGS, Okla. -- Mike Shambaugh, the Speaker of the Council for the Cherokee Nation, presented a check for $8,764 to the town of West Siloam Springs on Thursday, Sept. 15.

Shambaugh, on behalf of the Cherokee Nation, presented the check to Director of Public Works Waylon Chandler, who represented the town, according to a press release issued by the town. Mayor Rhonda Wise and Vice Mayor Linda Wise were in attendance, the release states.

Funds will be used to purchase computer hardware, mountings and emergency lighting for the water and street department vehicles, as well as decals for the code enforcement vehicle, the release states.

Byers asked Chandler and was told the water department needed computers in their vehicles which would help with the digital meters the town is looking to purchase, along with lights for the department's vehicles and also for the code enforcement vehicle, he said.

Under Byers' advice, Chandler put together a quote and emailed it to Shambaugh.

"Waylon was more than appreciative," Byers said. "Shambaugh has helped out a lot of people and a lot of municipal departments."

Byers also said that it was not just Shambaugh but the entire council for the Cherokee Nation who had a hand in helping the town, but Shambaugh is known for helping a lot of towns in his district.

Shambaugh's office did not immediately respond to a request for a comment.