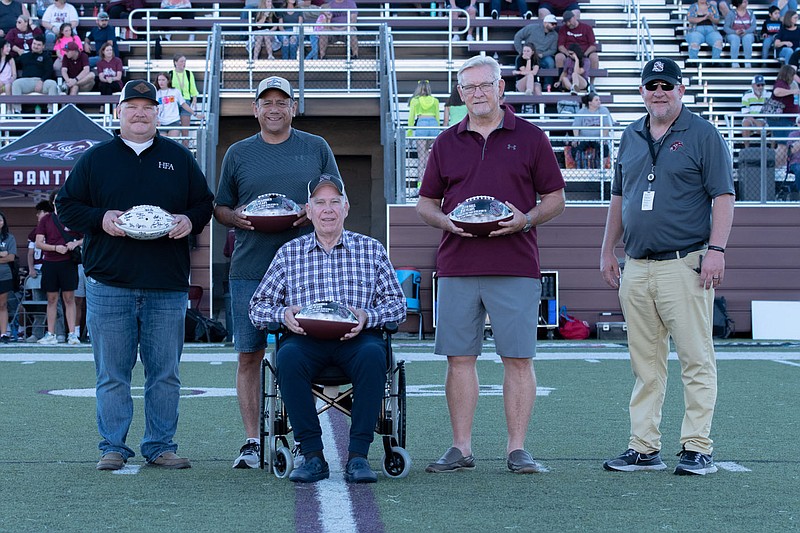 Bud Sullins/Special to the Herald-Leader Branson Hall, Shay McGooden, Mike McGooden (seated) and Keith Hall join athletics director Jeff Williams on the field to be honored for their work as sports announcers.

Four volunteers have officially ended their time working in the press box for varsity football games.

Mike McGooden, Shay McGooden, Keith Hall and Branson Hall have stepped down from their positions in the press box for the Siloam Springs football team.

With decades of experience under each one's belts, totalling more than 100 years of service, it made for a special occasion when the four of them took the field before the Sept. 2 home opener against Alma to be honored for their work.

Mike McGooden, one of the four who stepped down, had more than 40 years of experience. He was the primary public address announcer.

"I was there for I think 42 years," McGooden said. "We all just volunteered, all four of us. It's the best seat in the house. We always had something going on in the booth. We kept busy, but we always had a good time with it."

Mike's son, Shay McGooden, had 25 years of service with the program. Keith Hall and his son Branson Hall had 35 and 20 years of experience respectively.

"My dad, Keith Hall, was the spotter for Mike," said Branson Hall. "He sat there with his binoculars and called out who ran the ball, threw the ball, caught the ball, made the tackle. He was Mike's eyes on the field, and he did that his entire time."

He continued, saying "Shay McGooden, who is Mike's son, ran the scoreboard clock and added the scores. I ran the play clock. We kind of all did a little bit of everything over the years."

Branson Hall says that the experience brought him joy, especially as a Siloam Springs native.

"I've been involved with Siloam football since I was old enough to walk," Branson Hall said. "Mike asked me one day if I could fill in one night and I ended up staying on for 20 years. It was interesting for me to be up there watching these kids grow up, including my own kid."

Audra Farrell, a Siloam Springs School Board member, commented on the event. "Very much deserved recognition. We thank them all for the great service and the many years supporting Panther Football."

Hall says that while he probably wasn't done yet, he wanted to end it with his group of people. "I probably would still be doing it if everybody else was, but that was our group, and we always said that once Mike was ready to hang it up we probably all were."

The athletics department commented that they leave behind big shoes to fill.

"I don't personally know any of them," said Branson Hall in regard to the new team of guys in the press box. "Listening to the new announcer (Daren Ward), he sounds really good. Seems like he'll do a really good job. I didn't see any issues with the clock, so I think it looks like they've got a good crew."