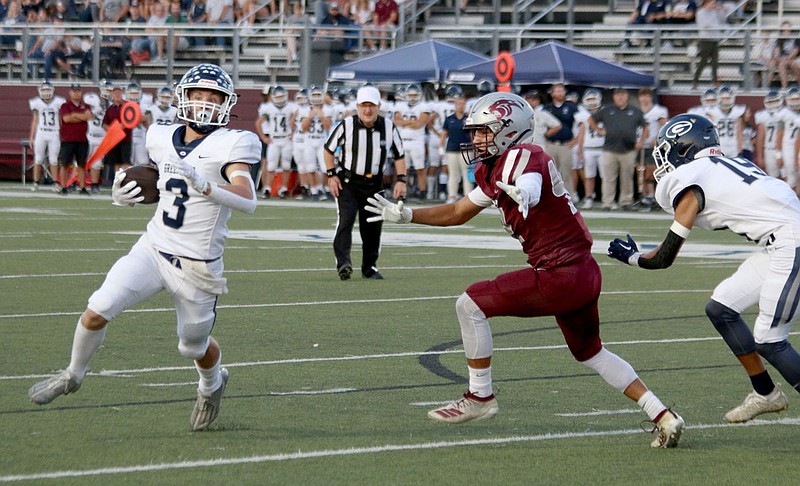 Mark Ross/Special to The Herald-Leader Greenwood's Grant Karnes (left) runs as Siloam Springs linebacker George LeRoy (middle) attempts to make a tackle in the first half on Friday, Sept. 16, at Panther Stadium.

Greenwood was on the attack from the start, rolling up 34 points in the first quarter on its way to a 61-7 win against Siloam Springs on Friday night at Panther Stadium.

Quarterback Hunter Houston threw three touchdown passes in the first quarter, one of which went to Grant Karnes, who also rushed for a touchdown.

Greenwood's Landon Nelms also intercepted a pass on Siloam Springs' first offensive possession and returned it to the Panthers' 7 to set up Karnes' first touchdown.

Greenwood's Eli Whitaker and Brady Mackey returned two fumbles for touchdowns on back-to-back Siloam Springs offensive plays at the start of the second quarter, and Kane Archer picked up a fumble and ran 41 yards for a score as Greenwood led 54-0 at halftime.

"We got off to a good start, and they made some mistakes and things kind of snowballed on them," Greenwood Coach Chris Young said. "It kind of worked out in our favor really quick. You know when things go like that in a football game, it can change momentum in a hurry, and that's what happened tonight."

Greenwood finished with 457 yards of offense with 358 yards coming in the first half.

Houston completed 12 of 15 passes for 164 yards, while Archer completed 5 of 10 passes for 70 yards and 1 touchdown, a 22-yarder to Scott Holland. Archer did throw an interception to Siloam Springs' Nick Driscoll.

Presson led all receivers with seven catches for 87 yards.

Glover led Greenwood in rushing with 95 yards on five carries. The Bulldogs rushed for 223 yards on 19 carries.

Siloam Springs (0-4, 0-2) finished with 116 yards of offense. Quarterback Jackson Still rushed for a 56-yard touchdown for the Panthers' only score.

"It was just a bunch of bad things happened," Siloam Springs Coach Brandon Craig said. "It was hard to watch. I hate it. We've got some good kids. We've got some kids that are playing really hard. But in football it takes everybody doing their part, and if one guy doesn't for us, it just hurts us tremendously."

Siloam Springs was limited to 116 yards of offense and only 1 yard passing. Still rushed for 56 yards on eight carries, while Jed Derwin had 42 yards on 19 carries.