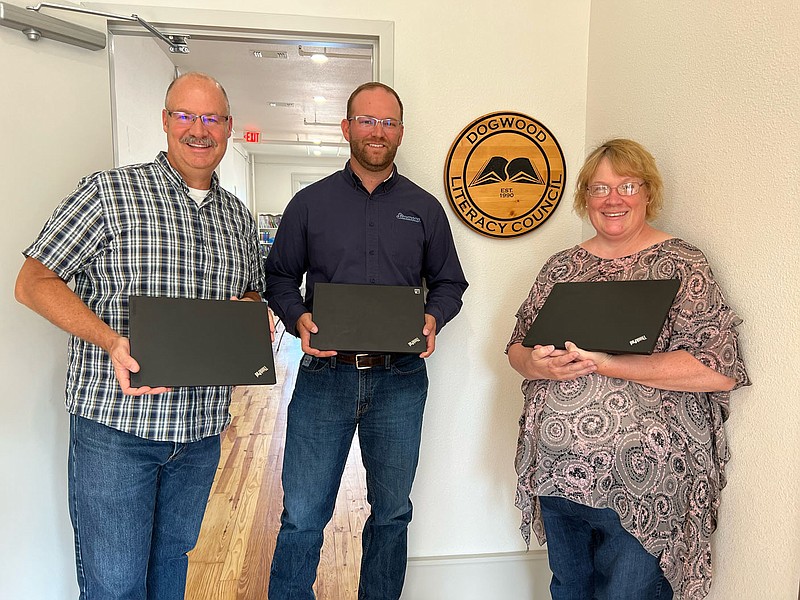 On Sept. 14, the Dogwood Literacy Council received a donation from Simmons Foods for its GED program.

"Chris Greathouse and Nick Braschler brought us 11 laptop computers to use for the GED program and in the English as a second language programs," said Charlie Muessemeyer, the executive director of the literacy council.

Greathouse serves as a Leadership Development Partner at Simmons Foods, while Braschler serves as the Director of Simmons Cares.

Muessemeyer said the new laptops come at the perfect time.

"It was great timing," Muessemeyer said. "This Monday we had to ask a couple of GED students to come back another time because we did not have enough computers for them to practice on."

Muessemeyer said the new computers will be put into use as soon as possible.

"We hope to have these set up and ready for GED class on Thursday evening," Muessemeyer said.

Dogwood Literacy Council has been in the throes of a move to a new location for months now, and while the move isn't complete, Muessemeyer says they can see the light at the end of the tunnel.

"Unfortunately, I am still waiting on the elevator," said Muessemeyer. "The inspector is supposed to come soon. So technically I have not been able to move everything into the Dogwood Literacy Council yet."

Muessemeyer said the move has been difficult with all of the books, furniture and other supplies that they have accrued during their time, but that a grand opening should happen by the end of the year.

In addition to that, Dogwood has invited Northwest Arkansas Community College to hold GED classes in Siloam Springs every Monday, Tuesday and Thursday evening 5-8pm.